EDITOR'S NOTE: Is Big Tech conspiring with the liberal left to disrupt GOP communications, or is the GOP just really inept at sending mass emails to potential donors? Just weeks before the midterms, the GOP claims that its fundraising emails are all ending up in its recipients' spam folders. Hence, the GOP lawsuit against Alphabet Inc., Google's parent company. If you find yourself left of center, this is just another example of the right’s whining with regard to their own technological ineptitude. If you’re right of center, this is proof that the entire system is rigged, from basic email communications down to the voting machines (like…it’s so rigged, why even bother voting, you might think?). So, which side of the fence do you occupy?

Two weeks before the midterm elections, the Republican National Committee hit Alphabet Inc.'s Google with a lawsuit, claiming they can't communicate with party members to fundraise because the big tech firm routes their emails into spam folders.

"The timing of Google's most egregious filtering is particularly damning...

GOP argues in the lawsuit this has been an ongoing issue for ten months. The committee is asking for unspecified monetary damages and a court order to "remedy Google's violations of state and federal law." 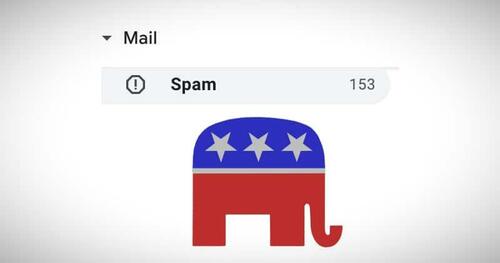 None of these allegations are surprising in the age of censorship pushed by the government and left-leaning big tech firms. Google, of course, denies culpability:

"As we have repeatedly said, we simply don't filter emails based on political affiliation. Gmail's spam filters reflect users' actions. We provide training and guidelines to campaigns, we recently launched an FEC-approved pilot for political senders, and we continue to work to maximize email deliverability while minimizing unwanted spam," spokesperson Jose Castenada said in an email to Bloomberg.

For years, GOP officials have expressed discontent with big tech, including Google, Facebook, and Twitter, for their unrelenting censorship.

"Google, far more than any other single entity, determines what humanity thinks is true about current events and knowledge in general. The platform continues to filter and refine its left-wing ideology through artificial intelligence, brainwashing most of the globe with a subtlety never seen in history," Epoch's Roger Simon wrote.

Big tech's censorship of conservatives could be on full display again, and just more evidence that elites are becoming desperate ahead of next month's elections:

"Censorship is the tribute that lies pay to truth. If truth were not so powerful, no censorship would be necessary," Epoch's Jeffrey Tucker recently opined.

Even with the GOP whining about big tech censorship, pre-midterm polls still show momentum is clearly in Republicans' favor.