EDITOR NOTE: Billionaire investor Jeffery Gundlach is dubious about any of the traditional signs of U.S. economic recovery. The DoubleLine founder says, “economic growth we're seeing isn't really economic growth," it is simply spending that is the result of monetary policy manipulation from the Fed. Furthermore, he notes that when Americans buy Asian-made products with all this stimulus money, it is recorded as GDP, but it’s actually Asian GDP. He blames the stimulus failure on the fact that “the Fed decided to go big early.” Gundlach summed up by making his case against the CPI transitory narrative, stating, “I don’t think the history book will say inflation was transitory." This is another reason he still believes in his theory that the U.S. dollar is doomed in the long term.

Building on his thoughts from earlier in the year that the dollar "is doomed," DoubleLine Founder Jeffrey Gundlach reiterated in tonight's webcast that any "economic growth we're seeing isn't really economic growth," it's just spending funded by "massive amounts of tools and devices The Fed has used."

As he noted previously, consumption is not really the economy. The economy is about production. And when you buy goods produced in Asia with stimulus money, it shows up as GDP, but it's really Asian GDP. It's consumption in the United States. "So the economy isn't really that strong with five million fewer jobs."

Even with all the stimulus... 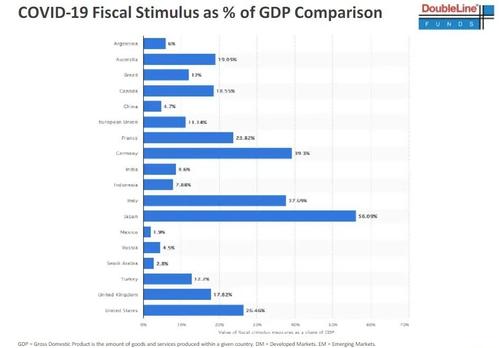 “The Fed decided to go big early,” Gundlach said and warns that policy makers going big with stimulus will be a “recurring theme” going forward, building on his previous thoughts that:

"We're running our economy in a way that is almost like we're not interested in maintaining global reserve currency status."

Specifically, the new bond king points out that it only took 20 weeks to unleash stimulus in these terms this time around, versus 80 weeks during the GFC... 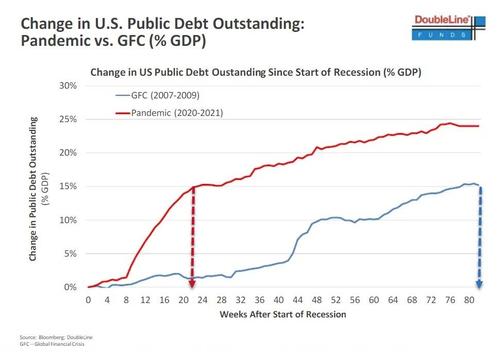 And along with massive expansion of The Fed's balance sheet (and concomitant interest rate manipulation), Real Fed Fund rates are dramatically negative (the last time we had negative interest rates of this magnitude wasn’t because interest rates were low, but because inflation was high), and while we have “high-ish inflation,” Gundlach warns it’s not like the ’70s... 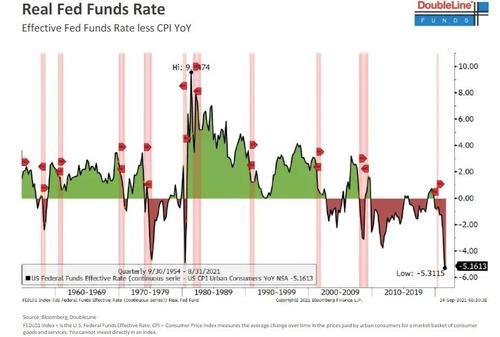 Simply out, he explains:

“We have the loosest monetary policy” going back to the early 1960s," adding that "we’ve never seen this magnitude of stimulus.”

On the labor market, Gundlach warns policy has been “heavy-handed” and has resulted in all sorts of distortions in the economy, noting that the inability for businesses to hire workers is a “wound.”

We’ll have to wait and see if the expiration of unemployment benefits has an effect.

Gundlach says inventories are also out of sync with history. 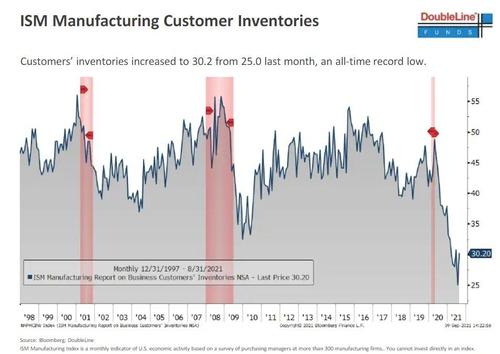 Another distortion by The fed is home prices going up, which Gundlach warns has created a renter stampede. Tenants have been rushing in. One thing that could offset CPI transitory narrative is “we fully expect that rents are going to go up.” The reason rents will go up is that there will be a massive amount of evictions once the moratorium ends, Gundlach says.

“I expect rents will go up very sharply” in the months and quarters ahead “if and when we move out of a no-evictions scenario,” he says.

CPI would be at 12% year-over-year if inflation statistics used actual home prices rather than owners’ equivalent rent, Gundlach says. 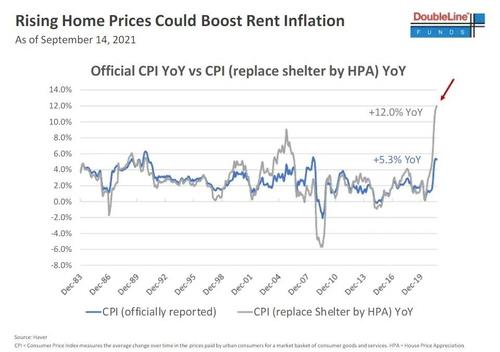 And most presciently, the DoubleLine founder says:

“I don’t think the history book will say inflation was transitory."

Specifically, he warns that:

“Transitory will be continually redefined to be a longer time period,” than the two or three months that had originally been bandied around.

One thing that does support the transitory narrative is the message from the bond market, though that might be distorted by yield-curve control, he says. 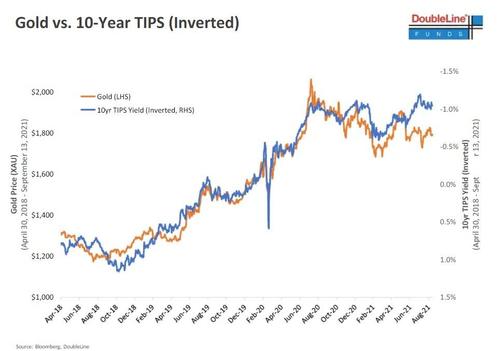 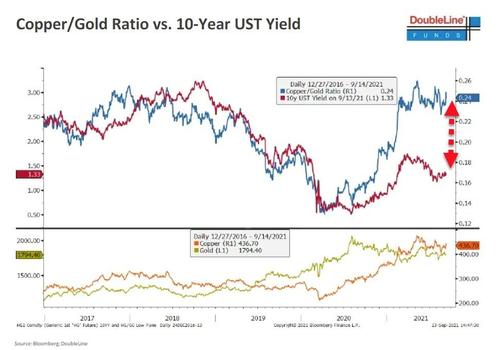 Gundlach says he bought European stocks “for the first time in forever” a little while ago.

Interestingly, Gundlach appears to be suggesting investors not fight The Fed (and the long-term trend of yields) and add to long-bond positions on each sell-off to the upper band... 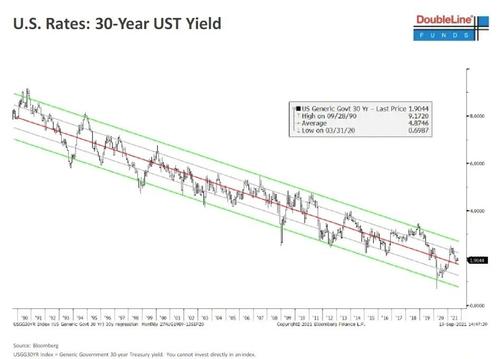 Finally, Gundlach says earlier this year he had said his highest conviction idea was that the dollar would go down but not in the near term. He’s neutral on the dollar, he says for now, but emphasizes his views are long term.

“I would be a strong advocate of emerging-market equity buying should the dollar give a signal it will break to the downside,” Gundlach says.

The dollar moves in seven- or eight-year cycles, according to Gundlach. The dollar index will go below 70 from around 92 now, but not this year. 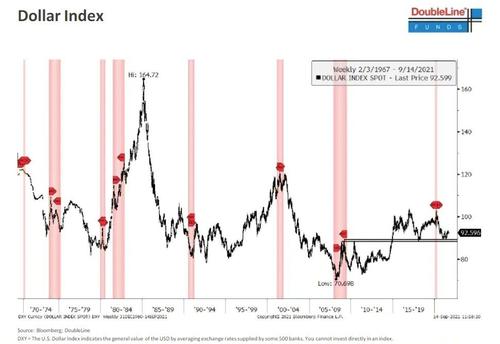 Which given his previous concerns:

"And so as long as we continue to run these policies, and we're running them more and more aggressively-- we're not pulling back on them in any way-- we are looking at a roadmap that is clearly headed towards the US dollar losing its sole reserve currency status."