EDITOR'S NOTE: Zero Hedge reports that the “smart money” of hedge funds are liquidating stocks at a record pace as inflation increases and the Fed’s Wall Street-friendly monetary policy becomes more and more in doubt. Bank of America, for example, reported that “the firm’s hedge-fund clients dumped more than $2 billion of stocks last week, exiting the market at the fastest pace since April.” Less savvy retail investors are gobbling these stocks up, “buying the dip,” but with the current economic client, this is much riskier than it has been the last few years. It seems like the investors who know best are trying to pare down their exposure to the stock market, and investors who aren’t as sophisticated might be getting in too late.

Over the weekend, and then again on Monday we reported that It had been a catastrophic week for hedge funds: heading into Black Red Friday, losses were staggering with Goldman Prime reporting that many hedge funds were caught off-guard by news of the Omicron variant as they had bought Reopen stocks and sold Stay-at Home names in the past week. As a result, in the week ending Nov 25, GS Equity Fundamental L/S Performance Estimate fell -1.57% between 11/19 and 11/25, driven by alpha of -1.12% which was "the worst alpha drawdown in nearly six months" and beta of -0.45% (from market exposure and market sensitivity combined).

It only got worse on Friday and then again Monday, when Moderna - the 3rd most popular short in the hedge fund universe with some $4.5BN of the stock held short by the 2 and 20 crowd... 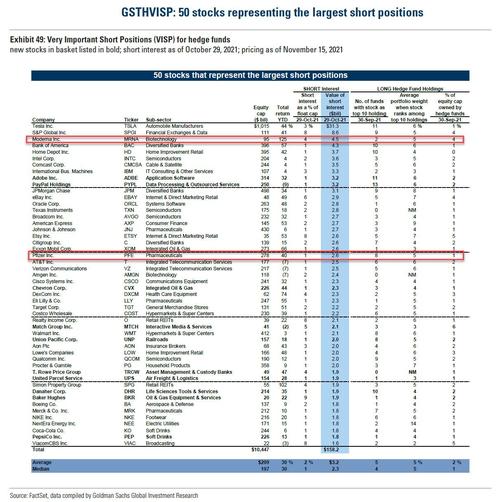 ... exploded higher, resulting in massive double-digits losses for funds who were aggressively short the name... and just in general as the following P&L charts from Goldman Prime show. 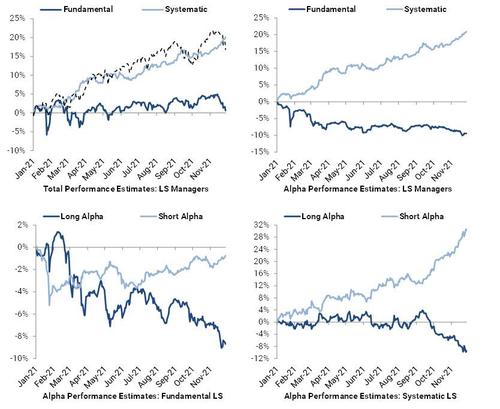 So having been hammered one too many times in just a few days, perhaps the "smart money" finally learned its lesson, and as the S&P 500 suffered its biggest two-day rout since October 2020, hedge funds went risk off big time, because according to the latest update from Goldman Prime, net leverage fell to a one-year low this week. 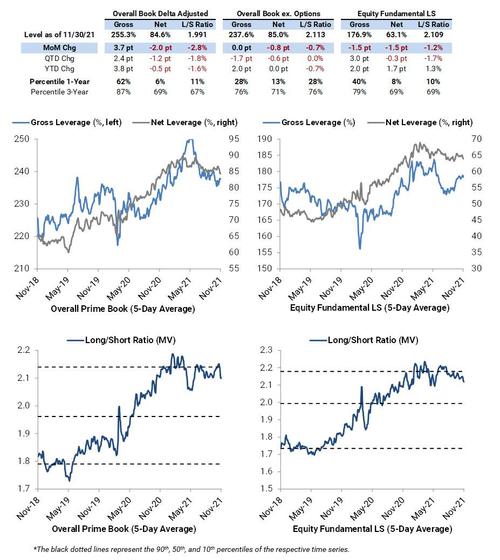 A similar analysts from BofA also confirmed the deleveraging trend of deleveraging - the firm’s hedge-fund clients dumped more than $2 billion of stocks last week, exiting the market at the fastest pace since April.

While it doesn't take a rocket surgeon to figure out why hedge funds were rapidly derisking, among the reasons for the mass exodus were both tax-loss harvesting ahead of the end of the year, as well as locking in profits that despite the recent turmoil remain more than 20% for 2021.

But the most proximal catalyst remains the sharp change in tone from the Fed where Powell now appears hell bent to consummate the worst policy mistake since Jean-Claude Trichet's ECB hiked right into a recession: “We’ve seen inflation be more persistent. We’ve seen the factors that are causing higher inflation to be more persistent,”  Powell told lawmakers Wednesday after decommissioning the term transitory to describe higher prices a day earlier. This has led to a rush to reprice assets with the prospect of higher interest rates sooner than investors had been anticipating.

Confirming our recent observations, Dennis DeBusschere, founder of 22V Research, told Bloomberg that “many have mentioned hedge fund pain leading to weird internal moves” among speculative tech stocks. “This latest negative omicron news leads to just closing the books up and moving on.”

Yet while hedge funds puked stocks, aggressively deleveraging into Wednesday's rout, retail investors did just the opposite and bought what HFs had to sell like there is no tomorrow: as we noted earlier, retail stock purchases rose to a new record on Tuesday of $2.2 billion, after reaching $2.1 billion during Friday’s rout, according to Vanda Research. 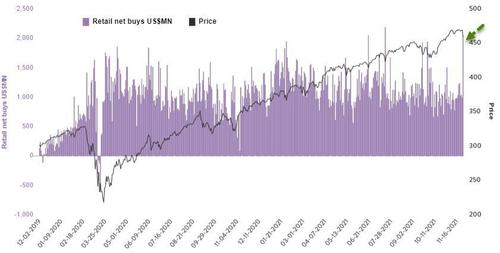 The firm flagged big retail buying in cyclical stocks like airlines and energy on Friday, versus Tuesday’s tech-heavy flows, and noted that institutional investors did the opposite, selling cyclicals on Friday and then tech on Tuesday.

In other words, retail investors were busy bidding up everything hedge funds had to sell.

That aversion to risk probably underlined the latest rout in unprofitable tech shares, a group that usually sells off when long-end Treasury  yields spike. On Wednesday, however, 10-year yields slipped and a Goldman basket of extremely expensive software stocks plunged 7.1%.

Yet while Vanda sees strong retail demand persisting, and limiting the downside to equities in December, Nomura advises caution when buying this dip.

As Bloomberg reports, strategists Chetan Seth and Amit Phillips wrote in a note that investors need to carefully assess if “buy the dip” will prove to be a good strategy, because elevated inflation implies the bar is higher for central banks to suppress volatility by providing policy support, if omicron does become a major threat. A combination of a hawkish Fed and virus uncertainty implies that stocks are likely to be volatile until at least the FOMC's December meeting.

But hey, as former Dallas Fed head Richard Fisher warned previously, retail BTFD investors are "getting ahead of itself, because the market is dependent on Fed largesse... and we made it that way...but we have to consider, through a statement rather than an action, that we must wean the market off its dependency on a Fed put."

"The question is - do you want to feed that hunger? Keep applying that opioid of cheap and abundant money?"

Blasphemy? Or perhaps just once, Jay Powell has got religion.

And while we would have once upon a time said that hedge funds will have the last laugh, performance from the last decade has made it clear that when it comes to dumb money, there is nobody dumber than those getting paid millions to underperform the market year after year. Or maybe this time will be different: as the last chart shows, have dramatically outperformed hedge funds for much of 2021, the retail favorite stocks are suddenly in danger of wiping out most if not all of their YTD gains...