Highest Inflation Post-War Being Handled Similar To The 1970s

EDITOR'S NOTE: While the Consumer Price Index is at its highest level in 30 years, the skyrocketing inflation that is happening in 2021 most resembles the inflation disaster in the 1970s. Zero Hedges compares how Fed Chair Jerome Powell is confronting an inflation problem in a very similar way to how Nixon’s right-hand financial man Arthur Burns did 50 years ago. Back then, Burns refused to admit that monetary policy had anything to do with rising inflation. Zero Hedge says when Burns finally admitted he had some power, “what worked was a significant tightening of monetary policy, but that also triggered a severe downturn in the economy.” This should be a warning for both Powell and investors today.

Statistically, 2021 consumer price inflation is the highest in 30 years. Yet, when actual prices are measured, it is one of the highest inflation rates of the post-war period, matching the double-digit increases of the 1970s and early 80s. The cause and symptoms are similar as supply-side factors triggered the initial surge, and price increases have broadened.

Policymakers appear to be repeating the mistakes of the 1970s, as they are ignoring the inflation side of the equation to hit their employment mandate. That old trade-off doesn't work, and the longer Powell follows the Burns-policy approach of the 1970s, the risk the inflation cycle triggers a hard landing in the economy grows with each passing day. Investors forewarned.

Although nearly 50 years apart, Fed Chair Jerome Powell is confronting an inflation problem similar to Arthur Burns in the 1970s. In the early and the mid-1970s, the US experienced two supply-side shortages. Unusual weather triggered a surge in food prices, and a few years later, oil prices quadrupled following the OPEC oil embargo. Inflation surged to double-digit levels, triggering a sharp economic downturn in the middle part of the decade. And that was followed by a string of relatively high inflation rates until it ended with exceptionally high-interest rates and a three-year recession in the early 80s. 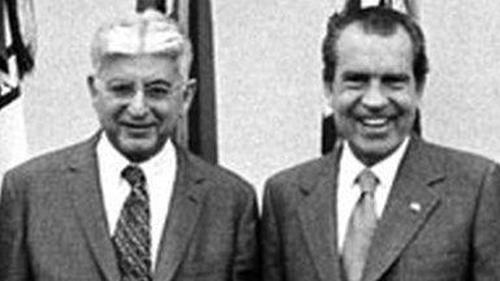 Fifty years later, Jerome Powell is facing a similar supply-side lift to inflation. Component and materials shortages have forced companies to raise prices for a wide range of items. In addition, bottlenecks at ports and trucking have led to extensive delays and dramatic increases in transportation costs.

Fed Chair Burns argued that monetary policy was not responsible for the inflation surge. To prove his point, he had the Federal Reserve staff create a consumer price index excluding food and energy (i.e., known today as the core price index). Federal Reserve Chair Powell has yet to go that far, but don't be surprised if someone at the Fed creates a pandemic-adjusted consumer price measure.

On the surface, headline consumer inflation during Burns tenure looks a lot higher than Powell's. However, when Arthur Burns chaired the Fed, the consumer price index was based on actual prices, and today it's not.

For example, owner housing has the most significant weight (23%) in the consumer price index. In the 1970s, the change in house prices counted as inflation, and today, it's what people can hypothetically charge to rent their house.

On an apples-to-apples basis, the 6% increase in the consumer price index in the past twelve months is 10%-plus in the Burns era since house prices are up nearly 20% in the past year, while owner-rents are up a mere 3%.

Statistically, the US has recorded four years (in the 1970s and early 80s) of double-digit inflation, and 2021 would be the fifth if the government statistical agencies measured consumer prices the same way as they did in the past.

The upshot of this is that Fed Powell faces a more significant and broader inflation problem than the official statistics show. Yet, Powell has promised that the Fed will maintain zero official rates until it ends the asset-purchase program in mid-2022. In other words, Fed Powell is running with a more easy money policy based on inflation-adjusted interest rates (i.e., real interest rates) than what was in place before the pandemic, and consumer price inflation was a little over 2%.

In the late 1970s, the federal government created the Council of Wage and Price Stability (a place I was designated to work) to help reverse the inflation cycle. The Council's programs for businesses, unions, and individuals were so complex that they failed to dent actual wage and price inflation. What worked was a significant tightening of monetary policy, but that also triggered a severe downturn in the economy.

The segments with the most significant inflation rise are the parts of the economy most vulnerable to a tightening in monetary policy. In the 1970s, it was commodity prices and the manufacturers and miners. Nowadays, its finance and asset markets. Investors forewarned.