EDITOR'S NOTE: If the younger generations offer us a glimpse of a possible future, as the old saying goes, what are we to say when the younger generations’ dreams of a future are systemically bound and shattered by an (old) institution that refuses to cancel out? As the author below argues, wage growth among Y’s and Zoomers is a pressing issue. Wages and “real wealth” aren’t keeping up with rising prices. However, they’re not so much the problem as they are mere symptoms. The underlying problem is the institutional normalization of Keynesian assumptions; all leading to monetary manipulation that, as Gen Y and Z are figuring out, deplete rather than increase wealth. That’s the “basic” premise (to use Zoomer language) and here’s the “L” result.

Home prices and rent are soaring faster than wages. This shattered home buying plans of generations Y and Z and put them in a rent squeeze as well. 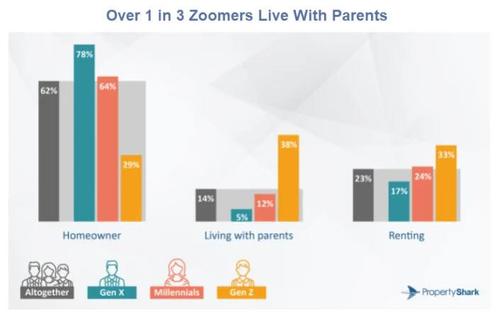 Things have really changed in three years according to Yardi's latest Generational Survey on Homeownership Dreams.

Three years ago Yardi found that Gen Z was enthusiastic about the prospect of owning a home, whereas Millennials were pessimistic about their homeownership outlook.

Nearly two years into the COVID-19 pandemic and its economic and societal fallout Yardi has different findings.

In the previous survey 83% of Zoomers expressed a desire and planned to buy a home within five years of 2018.

Only 29% of adult Zoomer respondents are now homeowners.

Millennials the Most Disgruntled Generation 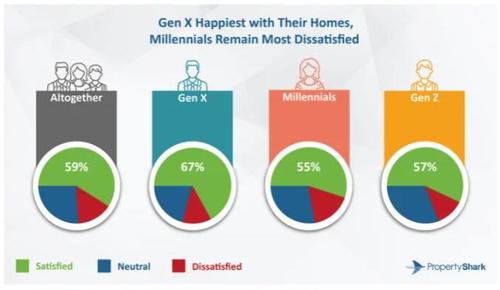 Just over half (52%) reported no effects on their homeownership plans, while 41% of Millennials and 36% of Gen Z non-owners had to delay buying their own homes. Furthermore, 4% of all non-owners reported losing their homes due to COVID-19, with Millennials most affected at 5%.

With the eldest Gen Xers now 56 years old, elder Millennials looking at 41 this year, and the forefront of Gen Z hitting 27 in 2022, homeownership rates among respondents from the three generations stand at 78%, 64% and 29%, respectively.

The main issue is affordability. Of all non-owners who participated in our survey, 53% view today’s housing market as just as inaccessible or even more inaccessible than in 2018, with Millennials most pessimistic. And, for those living with parents or other family members, the outlook is even more stark than it is for renters, with 59% of Millennials who live at home feeling that the prospect of homeownership is now even further removed.

No, but it sure didn't help either.

The real issue is wages have not kept up with prices making saving a nonpayment difficult if not impossible.

My charts show the problem. 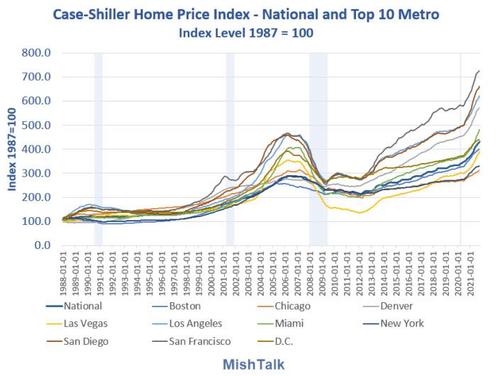 Home prices have soared out of site. But rents are rising so fast that Zoomers and Millennials want out. 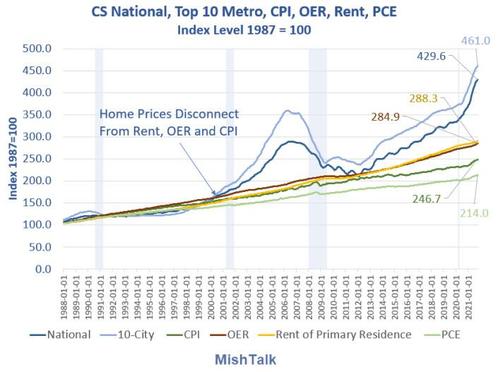 But compounding the problem for Zoomers and Millennials, rent and OER (Owners' Equivalent Rent) have been rising way faster than the CPI and wages since 2013. 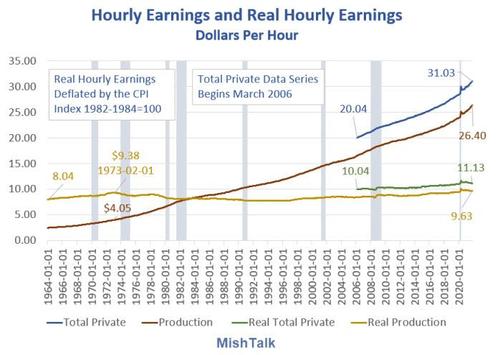 In real (inflation-adjusted) terms, people are making no more than they did 48 years ago (yellow line).

Nominal wages have soared but have barely kept up with inflation, assuming of course you believe inflation is not understated.

Every Measure of Real Interest Rates Shows the Fed is Out of Control.

My housing-adjusted CPI measure stands at 9.31%.

Try buying a house now on an additional half-penny per hour. It was actually possible factoring in a second wage earner per household until the year 1999 or so.

For details, please see Every Measure of Real Interest Rates Shows the Fed is Out of Control.

Meanwhile most Zoomers have to find a partner, live at home, or have roommates. I will see if I can get Yardi to conduct a survey on roommates.