EDITOR'S NOTE: The hard left just scored a huge victory as it garnered enough congressional support to unleash a coup d’etat on private businesses in the energy sector. The House just passed the Consumer Fuel Price Gouging Prevention Act, by a vote of 217-207. This will allow Biden to declare an “energy emergency,” giving the progressive Dems wide rein in “defining” price gouging. The problem is that many lawmakers within that segment are operating with scant knowledge of even the most basic principles of economics. And in this fundamental environment, an overabundance of socialist fervor and economic ignorance can only lead to policies that bind the invisible hand that can guide us out of the current crisis. Given the rise of input costs, it appears that almost any profit margin would be considered a form of gouging. And although this bill is aimed at “big oil,” the behemoth they’ve sworn to take down owns only 5% of the stations across the entire country. So essentially, Washington is waging a war against the small businesses that make up a critical segment of the American economy.

The House of Representatives passed the Consumer Fuel Price Gouging Prevention Act, by a vote of 217-207 on May 19, taking the country closer to greater government involvement in energy markets as gasoline prices soar to new heights. 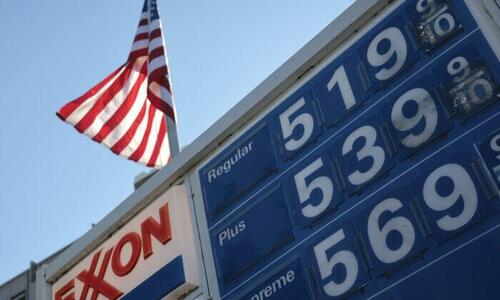 Such an emergency would empower the Federal Trade Commission (FTC) to target people who sell fuel at a price judged “unconscionably excessive” or that “indicates the seller is exploiting the circumstances related to an energy emergency to increase prices unreasonably.”

That presidential emergency proclamation would last 30 days but could be renewed indefinitely “as the president deems appropriate.”

During the debate, Democrats and Republicans clashed over the causes of record-high gasoline prices.

While the GOP emphasized new regulations and decisions against domestic energy under the Biden administration, Democrats pointed out that record-breaking energy prices have been accompanied by billions in profit for oil and gas firms.

“Our residents are so fed up with corporate greed,” said Rashida Tlaib (D-Mich.), a supporter of the bill.

Tlaib spoke in front of a large poster listing the 2021 profits of various large oil companies, including Shell and Chevron.

Meanwhile, Republican John Joyce (R-Pa.) stood beside a poster illustrating the long lines of cars at gas stations during the 1970s, when the United States implemented price controls in an attempt to deal with rising gas prices caused by OPEC’s oil embargo.

“Instead of creating price controls that would lead to less production and massive gas shortages, we need to rely on the energy that lies beneath the feet of my constituents in Pennsylvania,” Joyce said.

Rep. Kelly Armstrong (R-N.D.) ran through a laundry list of Biden administration actions he said contributed to the rise in gas prices.

These included the cancellation of the Keystone XL pipeline and the Securities and Exchange Commission’s climate-related disclosure proposal.

Rep. Frank Pallone (D-N.J.) argued that House Republicans were mischaracterizing the scope of the legislation.

“We’re not giving the FTC the authority to set the price,” he said.

Yet the bill itself defines violations in terms of “unconscionably excessive” prices, raising questions about how the benchmark for such a judgement would be set, and by whom.

“You cannot ask oil and gas companies, particularly onshore companies, to increase production when the infrastructure doesn’t exist to get that product to market,” Armstrong argued during his own testimony, citing the Duke pipeline and other pipeline projects that have been scuttled in recent years.

The House also passed two amendments to the bill.

The first, introduced by Rep. Val Demings (D-Fla.), would mandate an FTC investigation into alleged price gouging, including through cuts to refinery capacity. It passed 217-205.

The Sierra Club, an environmental organization aligned with the Democratic Party, praised the bill on social media, tagging their Tweet with the hashtag #blamebigoil.

Tim Stewart, president of the U.S. Oil & Gas Association, argued that the bill’s language is vague, setting a troubling precedent.

“The poorly written bill gives the president discretion to declare that gasoline or diesel fuel is ‘unconscionably excessive’ and to determine if your neighborhood gas station is guilty of exploiting an ‘energy emergency.’

“None of these terms are defined so they can mean whatever the president says, and these price controls can be continued indefinitely,” he told The Epoch Times.

“This should set off alarm bells across all industries and markets because while today might the price of gasoline, but tomorrow’s ‘unconscionably excessive’ pricing might apply to anything from the price of wheat, to health care, to airfare, to housing.”

The Epoch Times has reached out to Sen. Joe Manchin (R-W.V.) and Sen. Kyrsten Sinema (R-Ariz.) to see how they intend to vote on any Senate version of the bill.