Housing Market Peak Could be a Bubbling Black Swan

EDITOR NOTE: Home prices were up a record 16.6% year over year in May, bringing them to 38.1% above their 2006 peak. The historic convergence of “record-low interest rates, historically tight inventories and the COVID-19 pandemic pulling forward the flight from city centers to the suburbs.” Now though, mortgage applications are falling, lumber prices are rapidly dropping, rising inventories, and home builders are picking up steam. Experts believe that these forces are now conspiring to create a “Black Swan event” where the whole thing comes crashing down. When the housing market peak bubble bursts, it could easily drag the entire U.S. economy down with it, as we saw in 2008 during the last crash.

The euphoria in the U.S. housing market may be flashing a danger signal, and lofty home values could be at risk of a sharp drop.

Record low interest rates, historically tight inventories and the COVID-19 pandemic pulling forward the flight from city centers to the suburbs have sparked an unprecedented rise in U.S. home prices.

"The ‘Black Swan’ is the inevitable collapse in U.S. home prices —they are in the stratosphere benchmarked against all the fundamental factors that drive valuations," wrote David Rosenberg, chief economist and strategist at Toronto-based Rosenberg Research.

Home prices soared by a record 16.6% year over year in May, according to the national Case-Shiller index, and are now 38.1% above their 2006 peak. 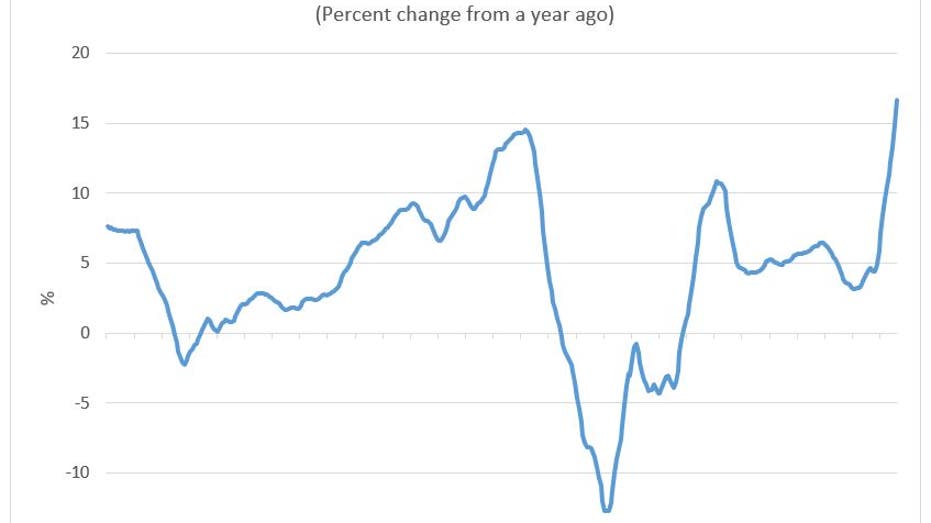 The surge has made home prices 25% overvalued compared with residential rents, almost 50% above normalized levels when factoring in inflation and more than 25% overvalued versus income measures like the employment cost index, according to Rosenberg.

The University of Michigan’s survey of consumers published in July found only 30% of consumers said home-buying conditions were favorable, the lowest since 1982.

This as the number of single-family homes under construction in the U.S. last month reached 689,000, the highest since July 2007, when the housing bubble was bursting.

He pointed to the recent decline in the number of mortgage applications and housing starts.

Mortgage applications to purchase a home have fallen for several weeks and were down 19% year over year in the week ending Aug. 13. Housing starts fell to a three-month low in July as builders grappled with a lumber shortage that sent the cost of the critical material skyrocketing while also being unable to find enough workers to complete homes.

There are some indications those problems are being resolved.

Lumber prices have plunged more than 70% from this year’s peak. Additionally, builders have added workers in 11 of the past 12 months, and the $300 per week in supplemental unemployment benefits are scheduled to expire next month, potentially bringing more workers back into the labor force.

"It’s like going from an extremely hot market to just a hot market," she said. "It’s still a seller’s market."