How Did the Stock Market Set a New High Every Day Last Week?

EDITOR NOTE: Last week, investors pulled out a whopping $7.8 billion from the stock market, selling shares and closing out mutual fund and ETF positions. Then how is it that the S&P 500 kept notching record highs amid massive capital outflows? It’s due to only six stocks. Six stocks that hold around 20% of the entire S&P 500’s value. Might as well call it the S&P 6. This gives you an obscure picture of the “broader market: (which apparently isn’t so broad after all). So, if you think the entire market is rallying, leading the broader economy, think again.

Put the two weeks together and you have investors yanking a net $14.4 billion out of stock funds. Where was the money going? For the most part, it was going into taxable bond funds.

So exactly how can a stock market index be setting new record highs when investors are cashing out and the majority of the stock components in the S&P 500 are far from their record highs?

When you have six companies that have been dramatically outperforming other stocks this year, and just five of them (Alphabet (parent of Google), Amazon, Apple, Facebook, and Microsoft)  make up more than 20 percent of the S&P 500’s total market capitalization, you can get an aberration in the pricing of the broader index.

To put it simply, were it not for these six stocks, the whole S&P 500 index would be negative for the year. DoubleLine’s Jeffrey Gundlach, a veteran market watcher, calls this “classic bear market rally activity.”

It is also known as “distribution” on Wall Street. That’s when the little guy is seduced into the stock market on the illusion that it is rocketing to one all time high after another. This gives the knowledgeable insiders that want out the necessary dumb money on which to dump their shares.

Here’s the crazy way these six stocks have been performing in the midst of the greatest economic crisis since the Great Depression. (We’re using closing prices on Wednesday, August 26, to coincide with the Rifinitiv Lipper funds flow report cutoff date):

Could there be an invisible hand giving an artificial boost to these stocks? Our first thought was to check on what’s been going on in the Dark Pools. These are effectively unregulated stock exchanges that are bizarrely allowed to operate inside the large Wall Street banks. For the week of August 10, the latest week in which data is available at Wall Street’s self-regulator known as FINRA, Dark Pools owned by UBS, Credit Suisse, JPMorgan Chase, Goldman Sachs, Morgan Stanley (and numerous others) were active in trading every one of the above six high-flying stocks.

In addition, these same Wall Street banks are allowed to issue buy ratings on the stocks (which incentivizes their brokers to talk up the stocks to their customers). Despite the fact that the SEC found internal emails showing that the bank analysts were pushing stocks to the public that they were calling dogs and crap in internal emails during the leadup to the dot.com bust, the Wall Street banks have been allowed to continue issuing buy ratings on companies to whom they make loans, underwrite their stock and debt offerings, and opaquely trade their shares in Dark Pools.

For example, Amazon, the biggest highflier of the gang of six, currently has a “buy” rating from Goldman Sachs and UBS; an “overweight” rating from JPMorgan and Morgan Stanley; and an “outperform” rating from Credit Suisse, just to mention a few of those banks that are also trading its stock in their internal Dark Pools.

How long can a frothy bubble last? Much longer than common sense would suggest, especially when the Fed keeps spiking the punch bowl with zero interest rates and trillions of dollars in bailouts. How long can Congress ignore the rigged structure of the stock market? Until Wall Street billionaires are no longer allowed to contribute obscene sums of money to Presidential and Congressional campaign committees. 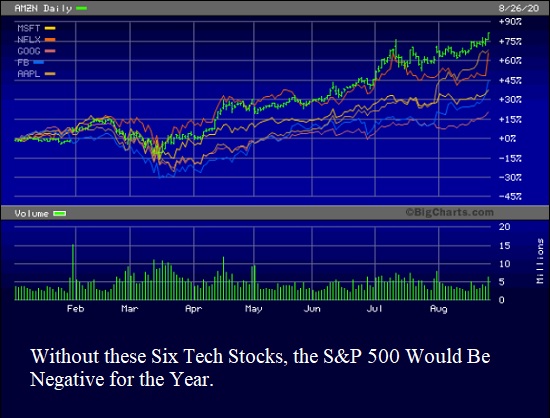