How Higher Interest Rates Are Effecting The U.S.

EDITOR'S NOTE: A few statements coming from the Congressional Budget Office (CBO) on its latest projections can be described as somewhat peculiar. On one hand, the CBO says that the US National Debt is virtually unsustainable at $30 trillion. Now that the Fed is hiking rates to aggressively counter inflation, higher interest rates may pressure fiscal spending in the years to come. Basically, the US can’t afford to get into more debt because the interest payments are getting too high. CBO director Phillip Swagel says "Those are outlays that will soak up revenues,” referring to the interest payments which by 2032 will amount to $1 trillion, roughly 3.3% of our GDP. Right now, the national debt is over 129% of our GDP. Yet, Swagel describes the issue as “a looming challenge, but we wouldn't say it's an immediate one." So, if we got to the $30 trillion mark by kicking the can down the road (what he describes as “a looming challenge”), then it’s okay to kick the can down the road some more as the challenge doesn’t pose an “immediate” crisis? If the US is virtually broke, considering it owes more than it generates out of your income, then when is the government ever going to consider the national debt to be a problem that has to be dealt with immediately? 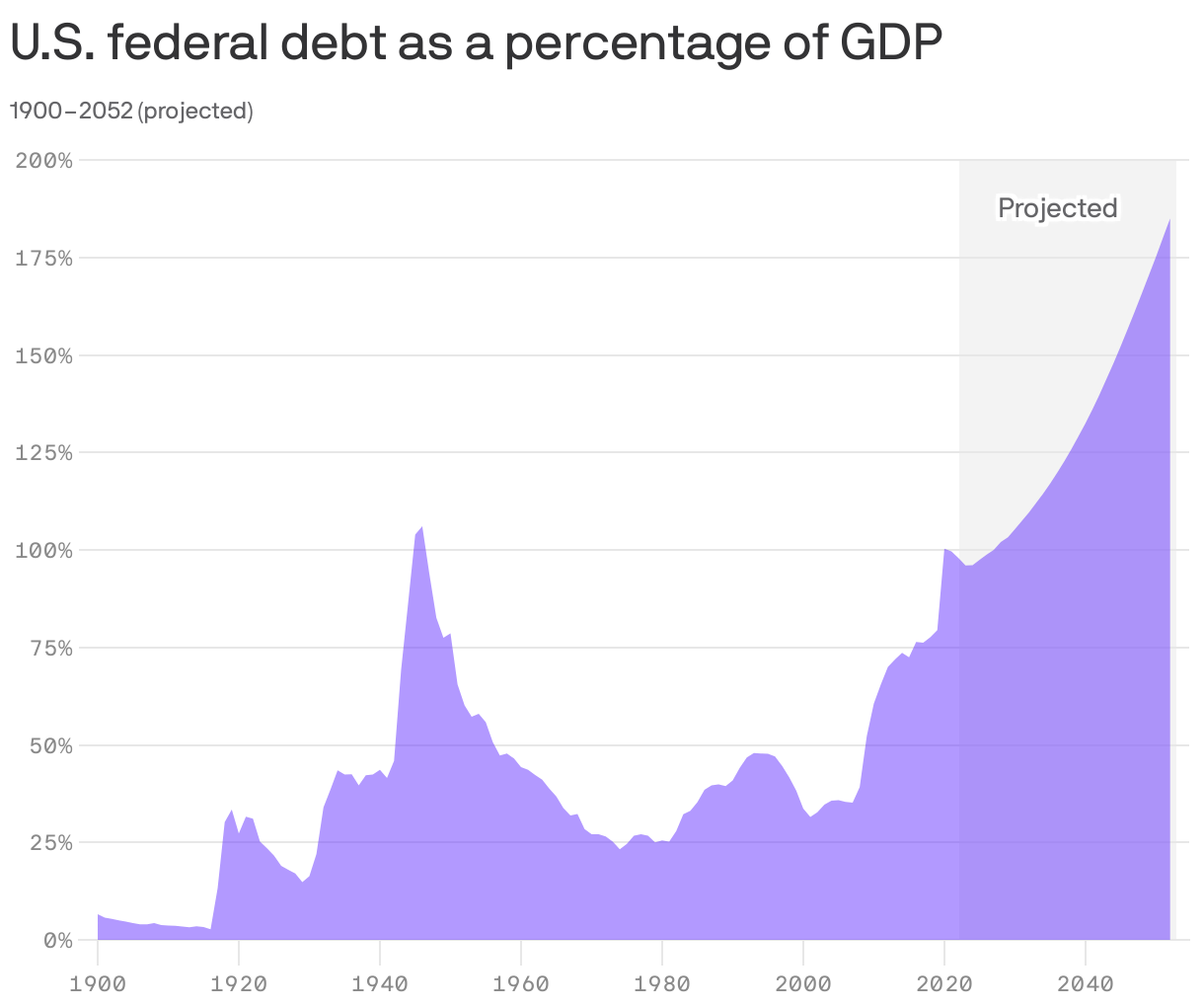 Why it matters: As interest rates go up amid the Fed's aggressive campaign to tamp down inflation, the cost of federal interest payments is expected to rise substantially — giving more fuel to those who want to pull back on spending.

What they're saying: "Those are outlays that will soak up revenues, in a sense," CBO director Phillip Swagel said at a press conference yesterday.

By the numbers: The CBO estimates the 10-year Treasury yield will average 2.9% in 2023, almost a full percentage point higher than its last forecast a year ago.

The caveat: Over the past decade, the CBO consistently forecast higher interest rates that never materialized, so what’s penciled in now may not ever come to pass.

What to watch: "Even as we see interest rates going higher, we don't have recession in our forecast," says Swagel. "We don't have interest rates spiking in the way that might indicate the sort of sharp fiscal crunch. So this is a looming challenge, but we wouldn't say it's an immediate one."