How Substance Abuse Is Affecting The Labor Force Participation Rate

EDITOR'S NOTE: America may be nearing historical lows in its unemployment rate. That would be good news if it weren’t for the fact that the labor market is still experiencing shortages. That’s because the labor force participation, the share of the working-age population that is either working or looking for work, is still below pre-pandemic levels. The article below delves into a rarely discussed yet significant aspect of the non-participants: up to 26% of young adults who are not looking for work may be struggling with opioid addiction. Although opioid addiction has been on the rise since well before the pandemic, the trend has seen a spike ever since. An unintended consequence of the virus and the lockdown? Opioid abuse, decreased immigration, childcare concerns, and ongoing pandemic fears are preventing the labor market from reaching a level of full employment. Meanwhile, inflation, geopolitical threats, and the likelihood of a global economic slowdown all play a role in making the future of America’s economic prospects a little less bright and alot more uncertain. 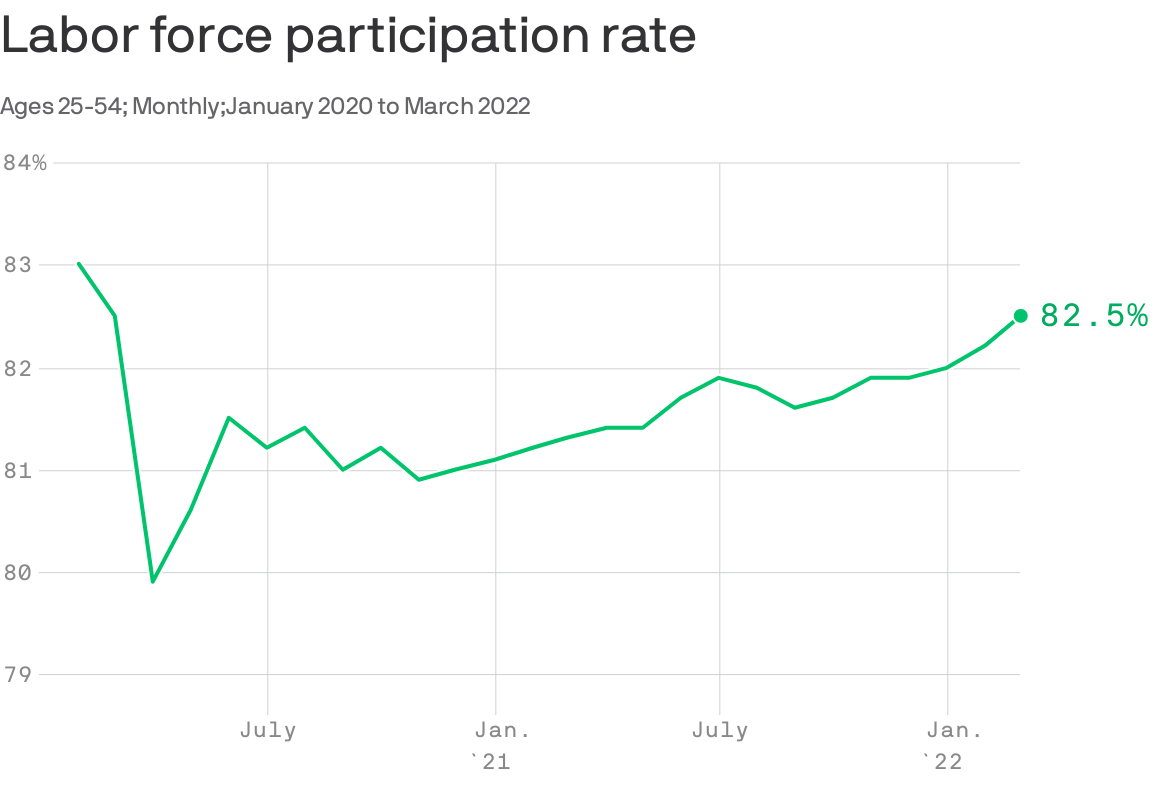 The labor force participation rate — the share of the adult population either working or looking for work — has not quite recovered from pre-pandemic levels. A new paper sheds light on one factor behind the shortfall: substance abuse, Emily writes.

Why it matters: There's an acute labor shortage in the U.S., and this is one reason — alongside reduced immigration, child care issues and ongoing concerns about COVID-19.

Driving the news: Between 9% and 26% of the decline in workforce participation between February 2020 and January 2022, among people aged 25 to 34, is probably due to a rise in dependency on substances like opioids and methamphetamines. That's according to findings in a paper released this week by the National Bureau of Economic Research.

By the numbers: Specific data on how many more people turned to these substances during the pandemic is not yet available. So, to arrive at this conclusion, the researchers backed into it.

The increase in drug abuse is related to a broader problem: The mental and physical health issues also driving the labor shortage, as Axios' Felix Salmon wrote about last year.

Flashback: A surge in opioid abuse dating back to the early 2000s was already keeping an increasing number of prime-age workers out of the labor force. The pandemic worsened the situation.

The bottom line: This is a sticky problem. By definition, quitting such addictive drugs is exceedingly difficult, the paper's authors note.