Biden Is The Cause Of Inflation

EDITOR'S NOTE: No matter how many empty calories you ingest, the energy generated by it will kill you over the long term. You may experience volatility in the form of temporary sugar crashes, but with enough re-ups, your energy levels will be soaring once again. Given enough time, however, your system will crash. And when it does, it may leave you a few steps from a fatal condition; if you’re really unlucky, the effects of necrosis and system failure will be agonizingly slow. Why am I talking about empty calories and sustained sugar highs? It’s because that’s what excessive money printing and fiscal spending is to the ailing economic body. And the latest boost goes by the name Build Back Better. A toxic boost? It is, and here’s why.

Too Many (Government) Dollars Are Chasing Too Few Goods.

The Consumer Price Index (CPI) tracks the cost of everyday items. It's jacked up a whopping 6.8 percent over the past year, the biggest increase in almost 40 years. Gas is up 51 percent, beef is up 20 percent, and furniture by 11 percent.

This is making the nightly news sound a little too much like a rerun of That '70s Show, a sitcom set in a decade famous for ever-rising prices and useless "Whip Inflation Now" buttons that Gerald Ford tried to stick on everybody from running mate Bob Dole to former Beatle George Harrison.

Back in the 1970s, Ford was better known for literally and figuratively stumbling than for his economic acumen, especially when it came to inflation, which soared into double digits shortly after he took office. Ford believed that the way to beat inflation was to browbeat companies into keeping prices down and Americans into becoming bargain hunters. He declared a war on high prices, referring to inflation as "domestic enemy number one."

"I pledge to my fellow citizens that I will buy, when possible, only those products and services priced at or below present levels," promised Ford.

Joe Biden is looking reminiscent of the 38th president, and not simply because he also has trouble with airplane steps.

Biden, his advisers, and his champions in the press are ignoring the tough lessons of the past by downplaying inflation or bizarrely claiming it only freaks out rich people. Then there's leading Democrats like Sen. Elizabeth Warren (D–Mass.), who seemed to be channeling Gerald Ford when she tweeted out that the reason "your Thanksgiving groceries cost more this year" was "because greedy corporations are charging Americans extra just to keep their stock prices high."

Even worse, Biden and crew are delusionally pronouncing that we can tame inflation by pumping massive amounts of government money into the economy—a course of action that will almost certainly make everything more expensive. "What this package will do is lower some of the most important costs, what [families] pay for health care, for child care. It's anti-inflationary in that sense," said Treasury Secretary Janet Yellen in defense of the recently passed $1.2 trillion infrastructure bill and promises of even-bigger bills related to the president's "Build Back Better" agenda.

What Ford, Biden, Warren, and Yellen have in common is a failure to understand inflation's most important underlying cause, which the Nobel Prize–winning economist Milton Friedman was explaining with unique clarity back in the 1970s. "To understand the cause of inflation, you must understand that it is anywhere and everywhere a monetary phenomenon," said Friedman. Supply-chain issues and rising demand are factors too, but the biggest contributors come from the government and the Federal Reserve.

We've seen absolutely massive increases in government spending over the past two years, which have been paid for by printing money and historic boosts in the money supply. When you print money it means that there are more dollars chasing basically the same amounts of goods and services, which causes prices to rise. In just the past three fiscal years, federal spending has swollen to nearly $7 trillion a year, up from about $4.4 trillion in fiscal year 2019. Spending was $6.6 trillion in 2020, and $6.8 trillion in 2021.

As the government borrows more to pay for its spending and the Fed creates money to buy that debt, the central bank's balance sheet has more than doubled between March 2020 to November 2021. The result is that the supply of dollars has increased by nearly 40 percent over the past 2 years, which is an off-the-charts record. 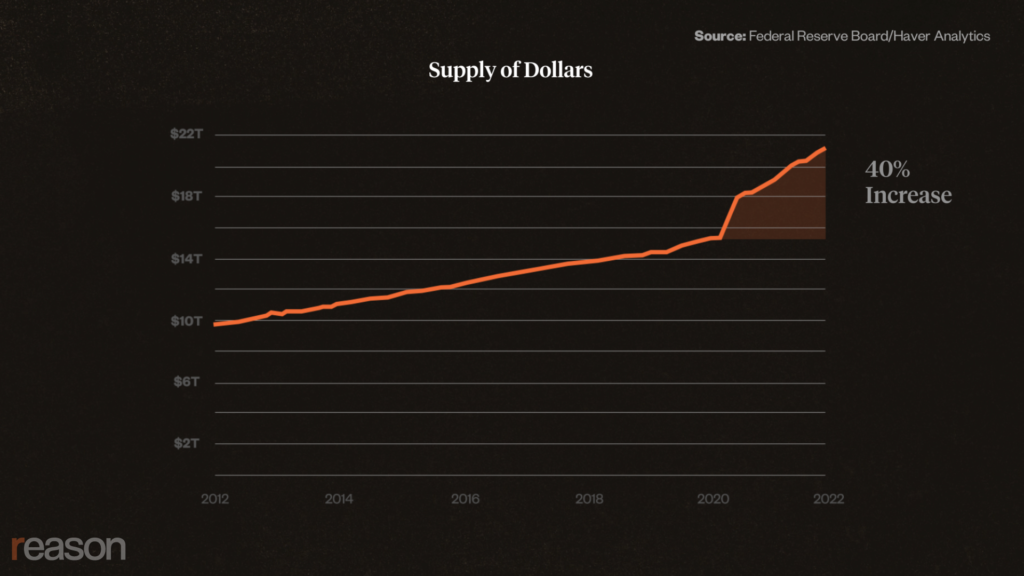 Short of going into recession, the traditional way to squeeze out inflation has been to raise interest rates and restrict the amount of money in circulation by raising taxes or cutting spending. But there's simply no reason to believe that Biden or anyone else in Washington is committed to the sort of fiscal and monetary discipline that would tame inflation. In fact, the president's infrastructure bill jacks up the very entitlement spending that is the major driver of long-term spending. Not only is he trying to expand access to and coverage offered by existing programs such as Medicare and Medicaid, he's pushing for tax credits for parents and new entitlements for child care and universal preschool.

Another thing that's changed over the past 40 years is that the publicly held debt has more than quintupled as a share of gross domestic product. In 2022, the Congressional Budget Office predicts that interest payments on the debt will be 5.7 percent of total spending, more than doubling to 11.6 percent by 2031. And that's assuming interest rates stay low. Squeezing inflation out of the economy by hiking interest rates is never a popular political stance. Since it will absolutely devastate the government's balance sheet, it will be even harder now.

Back in the '70s, Friedman likened the early stages of inflation to alcoholism. Politicians get to spend more money, tax revenues increase without passing new legislation, and some consumers feel like they are gaining purchasing power as their wages go up. "Inflation is just like alcoholism," he warned. "In both cases, when you start drinking or when you start printing too much money, the good effects come first and the bad effects come only later. That's why in both cases there's a strong temptation to overdo it, to drink too much and to print too much money."

Here's a final insult: Even the price of booze is going up, so not only will we have more sorrows, it's going to cost us more to drown them.

Music: Grey Shadow by ANBR and Temptation by Ride Free licensed through Artlist.