How Likely Is A Gold Confiscation Order? EDITOR'S NOTE: One can argue that the beginning of the end of the gold standard happened in April 1933 when President Franklin D. Roosevelt issued EO-6102, making it illegal for Americans to “hoard” gold. In other words, a form of gold confiscation took place due to a necessity that the government at the time saw fit for such a draconian measure. Today, this executive order remains a controversial topic and a point of soreness, as it somehow shifted from a piece of historical legislation to an oft-repeated marketing strategy. But the question remains, could such legislation happen again? While gold will likely maintain its monetary role in preserving value within the context of a fiat system, it may be unlikely, as the author below argues, that it can happen again. The reason: EO-6102 was about controlling the monetary system. And since the gold standard was fully abolished in 1971, central banks have enjoyed full control over the monetary system. In short, the author argues that such legislation can be effective only in the context of a gold standard which, apparently, is not the current system. Might you agree with the author's conclusion? Read on.

Yesterday (April 5) was the anniversary of a dark day in US economic history. 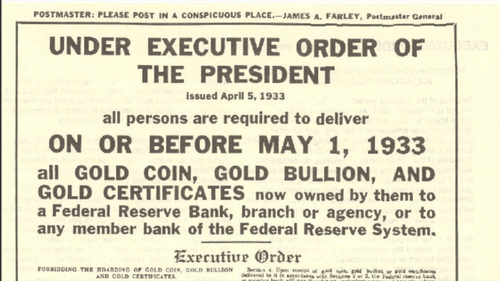 On April 5, 1933, President Franklin D. Roosevelt issued EO-6102. It was the beginning of the end for the gold standard.

Many people refer to EO-6102 as a gold confiscation order. But confiscation is probably not the best word for what happened in practice.

In effect, the executive order criminalized owning gold. People caught with more than small amounts of gold could face a fine of $10,000 or 10 years in prison for hoarding the yellow metal. The order required private citizens, partnerships, associations and corporations to turn in all but small amounts of gold to the Federal Reserve at an exchange rate of $20.67 per ounce.

In effect, EO 6102 nationalized gold. But in practice, this did not lead to gold confiscation in the true sense of the word.

Americans turned in gold to the government, but they did so voluntarily as an act of patriotism. And the government gave people dollars in return for their gold. The feds never made any concerted effort to confiscate gold by force. They never went door to door looking for gold. And few were prosecuted under the law. Most of the prosecutions involved people caught trying to sell gold in sting operations.

Today, you’ll sometimes hear people warn against owning gold because the government can just confiscate it again. Some numismatic coin dealers and precious metals pundits also use Roosevelt’s moves in 1933 to instill fear and bolster the sale of what they claim are “confiscation-free” products.

Even if you view the Roosevelt executive order as a warning sign, it’s important to understand the political and economic dynamics are much different today than they were in 1933. The world was on a gold standard and the economy was in a deep recession. The nationalization of gold was all about controlling the monetary system.

Today, the Federal Reserve has complete authority to expand the money supply and control interest rates. This is done with or without gold reserves. In other words, the government doesn’t need your gold.

There are numerous reasons to believe gold confiscation is highly unlikely. We outline them all in our new report, “Confiscation Con: Will the Government Take Away Your Gold?” The report outlines six facts you need to know before you get caught up in government gold confiscation hysteria.