Identifying the Wall Street Not a Bubble Scam

EDITOR NOTE: When Wall Street protests vigorously and says it’s not a bubble, you can be assured that it probably is. Acclaimed financial writer Charles Smith posits that Wall Street and the Federal Reserve are inflating “an unprecedented debt-funded speculative bubble” designed to reel in retail investors with the promise of big, quick profits while the smart money has already gotten out. These practices, followed by the “this is not a bubble” claim from Wall Street, has come in a cyclical manner about once a decade – when the dot com bubble burst in ’99-’00, when the housing bubble burst in 2008, and now again during the stock market bubble of 2021. The average American will be the one left holding the bag when it does come crashing down, and as the third crash in the last 20 years, how much more can normal people stand financially? Chances are, the ones with more in alternative assets will fare much better than those who fall for this Wall Street bubble scam.

It's really pretty simple to identify a speculative bubble of epic proportions in stocks: if Wall Street says it's not a bubble, it's a bubble. As I explained in The Smart Money Has Already Sold, from the long view the entire game of "investing" (wink-wink) boils down to one dynamic:

Wall Street and the Federal Reserve inflate an unprecedented debt-funded speculative bubble and then lure retail "investors" (i.e. gamblers) in with the promise that the enormous gains are just starting, there's so much more easy money ahead, etc. Then Wall Street distributes (sells over time so as not to alert the complacent herd of retail punters) its shares of overpriced rubbish ("investments", heh) to bagholders, and then to everyone's surprise (or not), the market suddenly crashes as the unsustainable bubble pops.

Wall Street has long practice in how to reassure the herd: since insiders have juiced the market higher for years at every dip (with the Fed's free trillions offering a helping hand), the bagholders have been well-trained to buy the dip even as the wheels come off the whole "this time it's different" scam.

Human psychology being what it is, desperate retail bagholders cling to the delusional belief that a recovery to new highs is just around the corner, because that's what the market has done for 13 straight years.

Every decade or so--1999-2000, 2007-2008, and now 2020-2021--Wall Street's roving army of shills spews the same paper-thin justifications for "this is not a bubble": this rally is just getting started, we're assured because 1) corporate profits are rising and will support much higher valuations; 2) the Federal Reserve will never let any bubble pop (said in so many words) and 3) if we look at comparative charts of quatloos, the British pound in the 1820s, the current price of sake on the Sendai Exchange and bat guano futures, it's obvious the S&P 500 is still undervalued. (Use as many arcane charts as possible to wow the bagholders.)

Sadly, it's all so easy. The hardest part is waiting for the pain from the last bubble popping to diminish enough for greed to overwhelm caution. Wall Street only had to wait five years from the nadir of the dot-com bubble in 2003 to the next bubble pop in 2008; the wait from 2008 to 2021 has been excruciatingly long. Thirteen years we've had to wait for the retail herd to go all in, for margin debt to soar to new extremes, for short interest to fall to multi-decade lows.

But it's finally showtime, and the bagholders continue buying garbage that's guaranteed to collapse in value. The post-bubble-crash phase is already being prepared: no one could have seen this coming--except anyone who paid attention to anything other than self-interested shills.

The woe and gnashing of teeth will be colossal for the bagholders, as will the profits for Wall Street insiders. Fortunately they have long practice in looking woeful in public, as if they're sharing the pain, and hiding their glee at getting away with the same old "this isn't a bubble" scam yet again.

What nobody dares ask is: will the bagholders have anything left after this "third time's the charm" bubble pops? Please don't tell us this is the end of the road for the "this isn't a bubble" scam. Without greed-fueled credulous bagholders with cash/credit to gamble, the game is over. 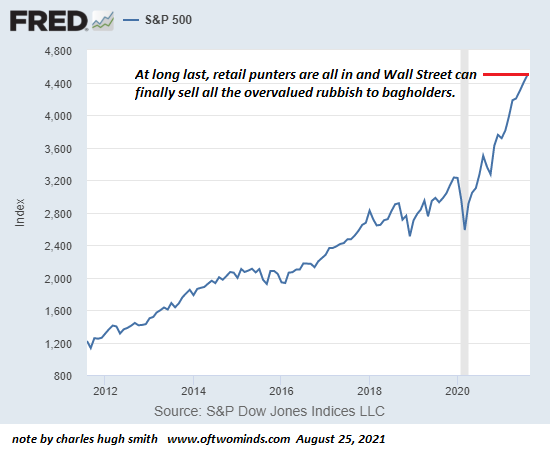