Inflation Can No Longer Be Ignored, Get Prepared

EDITOR'S NOTE: Zero Hedge had long been an outlet sounding major alarm bells about inflation. Now that inflation is rapidly rising, and even the most optimistic economists (Jerome Powell) can't deny it. Here, Zero Hedge recaps the reasons they foresaw inflation hitting as it has. Now that their predictions have come true, the author also suggests how Americans can protect themselves from economic hardship. The author writes, “gaining an effective hedge against the coming inflation tsunami will be difficult. Some investments are rather obvious: buying some silver and gold bullion. Also, “empirical evidence shows that of all the asset classes, commodity futures provide the best inflation protection.” If you’re keen to follow this advice, buying non-Fungible gold and silver soon could benefit you in the future.

Over the last two years I’ve published a number of articles warning investors about the risks of inflation and that this should be the top concern because inflation is the most powerful and indiscriminate wealth-destroying force (see here, here and here). However, most people I spoke to were dismissive: inflation was nowhere to be seen, so what’s the alarm? QE has been ongoing since 2009 and since it had no impact on inflation, it means they have it under control. Then the whole pandemic thing happened and last September I published the article, Inflation: we passed the phase transition suggesting that an acceleration of inflation was imminent, but the response was almost as nonchalant as before: very few were impressed. A bit over a year later, inflation can no longer be ignored. 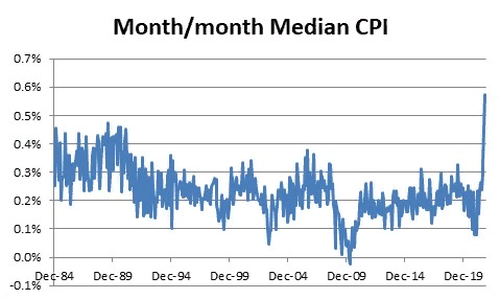 Granted, the onset of inflation is impossible to predict, but this should not have come as a surprise. Below are a few excerpts from my "phase transition" article.

In April 2012, economist Robert Wenzel was invited to speak at the Federal Reserve Bank of New York. On the occasion, he told the central bankers that “vast amounts of money printing are now required to keep your manipulated economy afloat. It will ultimately result in huge price inflation, or, if you stop printing, another massive economic crash will occur. There is no other way out.”

Mr. Wenzel was right and after an attempted quantitative ‘tightening,’ and a 20% market crash in Q4 2018, the Fed capitulated and resumed money printing. That program has sharply accelerated.

The relationship between money supply and price inflation is not linear; price inflation tends to move with some inertia. The 1970s inflation was preceded by the “Great Prosperity” of the 1960s: monetary expansion began in October ‘62 and continued through 1969. While money supply increased by 38% during that time, prices rose only 11% from April ‘62 to September ‘69. This inertia of price inflation convinced the era’s “New Economists” that inflation was a thing of the past. But inflation did emerge, only with a delay.

Velocity of money and human psychology

As new money enters circulation, there is a corresponding drop in money velocity since households don’t change their spending habits right away. They tend to use it to pay down debts and increase their savings so initially there is little upward pressure[4] on prices of goods and services. However, prices ultimately do catch up and when they begin to rise, velocity reverses course. From that point on price inflation begins to accelerate.

Gestation and the eruption of 1970s inflation

After seven years of growth fueled by deficit spending and credit expansion, U.S. economy began to overheat in 1969 and price inflation reached almost 5%. Nixon administration responded by instituting a tight money regime and extreme budget cutting. This led to a sharp recession.

A wave of mass layoffs and business bankruptcies spooked the government to abruptly reverse itself once more once more and increased deficit spending in the summer of 1970. Federal Reserve ramped up monetary inflation rate to 6.5% and the outlook quickly brightened again: interest rates plunged, stock markets soared and the nation was back on the high road to “prosperity.” But by now inflation began to accelerate and in 1974, it reached 11% and stayed high for the rest of the decade.

Warren Buffett warned that for a debtor nation, inflation is the economic equivalent of the hydrogen bomb. It is the most formidable destroyer of wealth. Since 1960 over two thirds of the world’s market economies suffered episodes of inflation which exceeded 25% in at least one year. On average, investors lost 53% of purchasing power during such episodes. In the U.S. between 1972 and 1982, price inflation averaged a “moderately high” 9% per year. It destroyed 65% of investors’ wealth in real terms.

What could trigger price inflation and when?

Unforeseen changes in either of these elements could trigger a phase change in price inflation. Even a moderate increase in interest rates could burst the asset price bubble; economic protectionism and a breakdown in international trade could close the current account deficit, and a rise in commodity prices could boost inflation expectations and the money velocity.

Many people wonder why Japan, with its massive QE program hasn’t experienced any price inflation (yet)? The key difference between Japan and the U.S. is that the dollar is much more vulnerable to the actions of foreign creditors. While most of Japan’s debt is held domestically, foreigners hold more than $25 trillion in dollar denominated securities, short-term paper and offshore bank deposits. As Jens Parsson wrote in Dying of Money: “The economics of disaster commences when the holders of money wealth revolt. … Foreign holders of the money take fright … and their money elbows its way into the markets and reverses any balance of payments deficit.”

Economic imbalances that caused the 1970s inflation were mild compared to today’s conditions. Today, the trade balance, fiscal deficits, public and private debts, as well as money supply growth are much larger than they were in the 1960s. Even through the inflationary 1970s, the money supply growth remained below 14%. This time, we blew past 26%. Predicting how these imbalances will play out is quite out of the question, but the risks are very serious and individuals as well as pension fund managers should consider taking bold action to protect their wealth from the ravages of inflation.

For the 99% of us, gaining an effective hedge against the coming inflation tsunami will be difficult. Some investments are rather obvious: buying some silver and gold bullion. I don’t recommend you go overboard: have enough to cover a few months’ worth of your living expenses and to bribe corrupt government bureaucrats if necessary. Bitcoin might preserve some of your money’s purchasing power, but I remain cautious with regards to this alternative. After this year's run, a correction could be brutal. Finally, owning a plot of farmland – even a small one – might be a good idea – for sure they can’t print more of that.

Ultimately however, we’ll have to act collectively. Our economies can function smoothly provided they have sufficient amounts of stable currency to serve as mediums of exchange. If currencies like the US dollar, euro and others are going to be debased, we can create local and regional currencies to keep the flow of goods and services going so people can exchange what they have to offer to the community and obtain what they need. This is not a radical idea: alternative currencies, including time banks have a long and honored history of lubricating local and regional economies so that the people may have access to the natural abundance that is our birthright.

For the 1%, the wealthier population segment, or managers of investment and pension funds, the options are rather different: for them, the most effective inflation hedge is a diversified commodity futures portfolio, (described at the link).

Commodity futures: the best way to protect your wealth

A paper titled, “Assessing Managed Futures as an Inflation Hedge Within a Multi-Asset Framework,” published in the Journal of Wealth Management concluded that, “Managed futures outperform the other asset classes… No other asset class presents itself as a viable inflation hedge.”

Indeed, as inflation erodes money’s purchasing power, commodity prices can rise very significantly. For example gold appreciated by 2,300% during the 1970s, from $35/tr.oz in 1971 to $850 in 1980. Inflation is likely to have a strong impact on other commodities as well, including energy, industrial metals and agricultural staples like wheat, soybeans, sugar, coffee, cotton and others.

In fact, a significant readjustment in commodity prices - quite beyond what we've seen so far - is well overdue. Since the last financial crisis, the commodity prices have fallen to new historical lows relative to stock prices. Even with this year's rallies, they've remained barely above the levels in the below chart:

Just by reverting toward their historic norm, commodity prices could still increase multi-fold. This process will likely unfold as a multi-year trend, offering perhaps a generational opportunity for investors to diversify their risk away from overinflated assets and gain a meaningful inflation protection at the same time.

We can’t predict how high or how fast the prices will move, but the one thing we know for sure is that large scale price events almost invariably unfold as trends which can span months and years. Systematic trend following is the most reliable way to navigate them.

Alex Krainer – @NakedHedgie is a former hedge fund manager, founder of KRAINER ANALYTICS and publisher of the daily TrendCompass reports. I-System TrendCompass provides daily CTA signals on over 200 financial and commodities markets so you can navigate trends profitably, with confidence and peace of mind. Subscription rates start at below 85 Eur/month and one-month test drive is always free of charge. To learn more, please visit TrendCompass page or drop us an e-mail at TrendCompass@ISystem-TF.com. For qualified investors, we can also propose superbly engineered turn-key portfolio solutions, including a high-octane inflation hedging portfolios.