EDITOR NOTE: If you were to look at our current economic scenario with razor-sharp clarity, you’d probably realize that the Fed is truly stuck between a rock and hard place. If it continues on its easy-money path, inflation will become persistent and surge to even greater heights. If the Fed raises rates, such an action will likely bring about a cataclysmic collapse in the stock market, wiping out trillions in Americans’ wealth. So, what’s left for it to do? The Fed can always bluff and hope the population buys it. It can threaten a “rate hike” and hope the ensuing panic selling is just enough to trigger a smooth landing without a crash. Aside from this, however, have you considered your own response to this pending crisis? A suggestion: keep an eye on the Dow-to-Gold ratio, hold hard currency--physical non-CUSIP gold and silver--and cash will keep you poised to pounce when the next great opportunity presents itself. As the legendary trader, Jesse Livermore once said, “it never was my thinking that made the big money for me. It was always my sitting tight” A simple solution to a highly uncertain future

The Bureau of Labor Statistics (BLS) released its latest Consumer Price Index reading yesterday. It came in at 271.7… up 5.4% from a year ago.

The BLS also released its latest Producer Price Index reading today. It came in 7.3% higher over the reading from a year ago.

What does this mean for the Dow-to-Gold trade we follow in these Postcards? More below…

Hunkering Down in London

Kate, the kids, and I have all been sick this week with flu-like symptoms. We’ve isolated ourselves in our house.

Many people around us, including some of our friends and neighbors, have reported catching COVID-19 in the last week, despite having all been vaccinated.

We thought we might have COVID-19, too. So yesterday, we went to the government testing station nearby and took COVID-19 tests. The results came back negative today.

Either way, we’re just hunkering down in our house doing our “schoolwork.” We’ll be back doing field trips and posting pictures again next week…

Turning back to the BLS readings I mentioned above…

In these Postcards, we’ve long thought that inflation was coming. And we made the case that when it came, the Federal Reserve wouldn’t have the courage to fight it by raising interest rates and/or tapering its money-printing.

As regular readers know, the government is bankrupt and corporate America is drowning in debt. If the Fed were to raise interest rates, our hypothesis is that it would pop the debt bubble, and economic growth and the stock market would collapse, leading to a massive decline in prosperity.

So now that inflation is here, what happens next?

It’s simple. The Fed will pretend it’s going to raise interest rates and threaten to taper its money-printing. It has to do this to reassure the bond market their bonds are safe.

Then, the Fed will hope that inflation recedes over the next two years so it doesn’t actually have to raise interest rates and taper its money-printing.

In poker, they call this “bluffing.”

If prices keep rising, it’ll be fascinating to see how the Fed reacts. They’ll have to reveal their bluff.

But if prices back off, the Fed can breathe a big sigh of relief. And the credit bubble can survive for a few more years…

Only One Rational Response

As a long-term investor, there’s only one rational response to this situation, in my opinion.

And that is to stand aside and keep away from harm… until the storm has passed and it’s safe to buy high-quality equities again.

There are two parts to this.

The first is to hold hard currency like gold, silver, and certain value stocks that approximate owning hard currency. (My favorite value stocks are companies that own fleets of cargo vessels, such as shipping and tanker stocks.)

And the second is to keep an eye on the Dow-to-Gold ratio as it returns to “cheap” levels.

As longtime readers know, the Dow-to-Gold ratio tracks the Dow Jones Index priced in gold. The ratio peaked in 1999, and it’s been falling ever since – granted, with a few interruptions along the way.

As you can see, the stock market has bounced over the last year in terms of gold, just like it did in 2011. But I expect it will soon resume its next leg down… 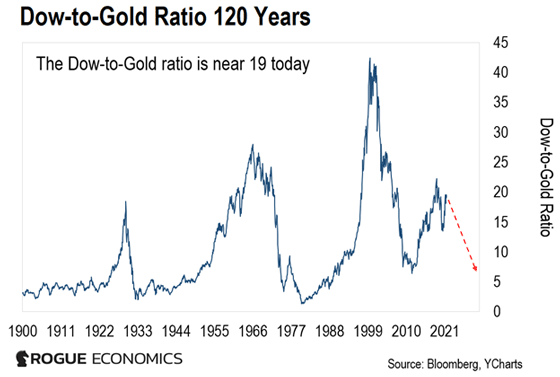 As a trader, there may also be an argument for attempting what we’ve been calling a “Hero Trade.” That is, betting on the decline of the credit bubble.

The best way to do this, in my opinion, is to short the companies that have enormous debt burdens.

In other words, to bet against corporate bonds… and in particular, junk bonds. As I explored in the July 7 Postcard, junk bonds seem to me to be “ground zero” of the credit bubble.

It’s not an easy trade, and personally, I haven’t decided whether or not I’m going to attempt this.

I sleep well at night. By placing this trade, it seems like I’d be inviting a lot of stress into my life. On the other hand, the potential profits could be incredible, life-changing, never-to-be-seen again…

Hmmm. What to do?