EDITOR NOTE: Analyst forecasts for the price of gold are currently ranging between $3,000 to $5,000 an ounce. A potential boon to gold investors, it inversely heralds a catastrophic scenario to everyone else holding mainly dollar-valuated assets. Looking back in history, when gold had been driven to such heights (relatively speaking), the economy had also made an equidistant move, albeit, by way of a steep plunge. Think the Great Depression of the 1930s or 1970s stagflation. Are we heading there? The future remains uncertain. But if we do, we know that there’s “certainly” a safe haven upon which we can rely. And it’s going somewhere between $3,000 and $5,000.

The current year is proving to be an annus mirabilis for gold investors, with the yellow metal running riot. Gold prices are currently trading at $1,933 per ounce, not far from their historical high of $2,075 that they reached a month ago. That is good for a 26.5% gain year-to-date and 30.9% since their 52-week low in March, compared to a 6.3% YTD gain by the S&P 500. The torrid rally represents the sharpest gain the metal has mustered in more than a decade. That is hardly surprising given gold’s traditional role as a safe haven asset that many investors turn to during times of deep crises--and few can rival the COVID-19-induced economic meltdown. The Covid-19 situation has been improving somewhat, yet hedge funds, Wall Street, and investors alike continue being extremely bullish about gold, with some licking their chops and predicting that the yellow metal could touch absurd levels of as high as $3,000 and even $5,000 per ounce.

Bank of America Merrill Lynch says it expects gold to hit $3,000 by early 2022 while Citigroup and billionaire Thomas Kaplan, founder of New York-based asset management firm Electrum Group, believe that $5,000 is in the crosshairs.

That certainly sounds like a gold bug’s dream. But what would such a climb imply for the rest of the financial markets? 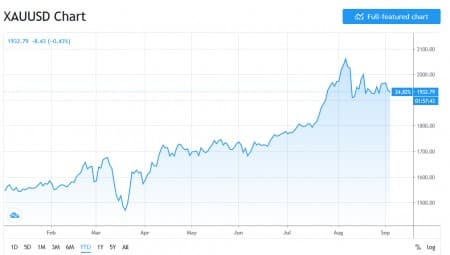 The virus has certainly unleashed a torrent of forces that have been fueling a relentless demand for gold and its time-honored credentials as a safe haven. Gold markets tend to flourish during times of deep economic crises when bonds offer flat or negative returns or stock markets become too choppy.

All these have certainly rung true during the crisis.

The global economy was already showing signs of malaise well before the Covid-19 pandemic, prompting the world’s central banks to cut interest rates to historical lows. Investors tend to turn to safe-haven assets like gold during low-interest environments, though the gold-interest rate nexus has been weakening since the 1970s after the U.S. abandoned the gold standard.

That said, there is a clearer correlation between economic crises and gold rallies. Several months ago, the World Bank sounded the alarm that the crisis was likely to plunge the economy into the worst recession since WWII. People tend to flock to safe havens such as gold and silver during times of heightened geopolitical and economic uncertainties, which in turn supports higher gold prices due to gold’s price elasticity as Erb and Harvey noted in The Golden Dilemma. As Citigroup analyst Heath Jansen has pointed out:

“When investors are hungry for gold, the metal has a habit of rising exponentially which has no parallel amongst metals.”

Unprecedented stimulus packages by central banks have also been playing a part in the rally. A few months ago, the world’s central banks doled out huge stimulus packages to the tune of $15 trillion in a bid to shore up the economy against the effects of Covid-19. Whereas this has helped the stock markets to recover at a faster-than-expected clip, the stimulus overkill has, unfortunately, led to the classic cobra effect and unintended consequences, one of them being a weaker dollar. A weaker dollar tends to push up prices of dollar-denominated commodities such as gold. 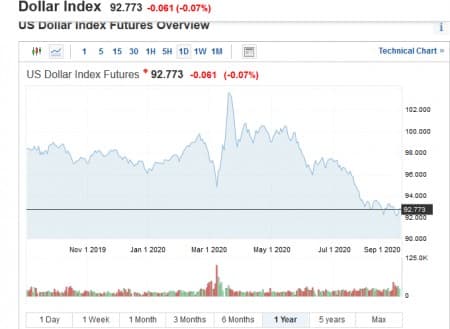 Unfortunately, gold prices flirting with five-digit prices would likely be a very bad place to be.

For one, such levels would imply hyperinflation and possibly 1970s-style stagflation in the U.S.

It would imply exceptional political and social unrest and would push the country into a true hyperinflationary death spiral with pretty much all commodity prices skyrocketing. At the same time, the real value of most commodities would decline dramatically as people focused their attention on mere survival.

If gold prices started to approach $10,000, the dollar would probably lose its status as the world’s pre-eminent currency. Many other fiat currencies would lose value with another currency, such as the Swiss franc taking over as the world’s reserve currency. In desperation, First World governments would likely resort to dirty tricks, including imposing currency controls on any form of money crossing their borders or even confiscating private citizens’ bullion as the U.S. government did during the Great Depression.

Gold prices are currently sitting near all-time highs. Another 10%, 20%, or even 30% rally from here over the next 12-24 months might not necessarily throw the global economy out of whack. But calling for $5,000 might be biting off more than we can chew.