Is The Build Back Better Bill Actually Free?

EDITOR'S NOTE: President Biden is making a habit of saying that his multi-trillion-dollar “Build Back Better” program is “free” to the American public but is that the truth? Zero Hedge reports that it isn’t. Senator Joe Manchin (D-WV) has said the idea that the bill will be revenue neutral is based on “budget gimmicks,” and CNBC’s Ylan Mui says, “While Democrats are claiming they have cut the price tag of the social spending package by more than half, they are using some fuzzy math. ... The most glaring example is that of repealing the SALT cap for the next five years, but they claim they 'pay' for that by reinstating it for the following five years." We all know that nothing in this world is free, and maybe if the Biden administration started admitting that, they’d have an easier time passing this bill.

If you are struggling to understand why Senator Joe Manchin refuses to bend-the-knee to his progressive pals' massive social-spending plan, prepare for some cognitive dissonance.

Why wouldn't he just go along with it? After all, the smartest Democrats have all declared the colossal spendfest is 'free', right?

Citing provisions to offset the spending, Biden has repeatedly claimed that the bill is “going to cost nothing.”

House Speaker Nancy Pelosi has trotted out this argument with great confidence.

"It's not about a dollar amount,” she told reporters.

“The dollar amount, as the president said, is zero. This bill will be paid for.”

“the net cost of Build Back Better is zero."

And sympathetic journalists have picked up the mantra.

But - as you may suspect - it's all a bunch of bullshit premised on what Manchin called "budget gimmicks... and shell games." In fact, as CNBC's Ylan Mui noted this morning, it's "fuzzy math," and citing work based on the Penn Wharton Budget Model (PWBM), the cost of this new new deal is over $4.1 trillion and only $1.554 trillion is paid for.

"While Democrats are claiming they have cut the price tag of the social spending package by more than half, they are using some fuzzy math..." Mui begins, noting "the most glaring example is that of repealing the SALT cap for the next five years, but they claim they 'pay' for that by reinstating it for the following five years."

Additionally Mui notes that various packages at the heart of the bill, such as Universal Pre-K, Medicaid expansion, and Child tax credits all end after just a few years (6 years, 4 years, and 1 year respectively), and of course, those 'free' handouts then become political hand grenades to hold over the Republicans as they expire.

The Democrats are open about this plan, as Mui notes, "their strategy is to start as many new projects as possible and then build public support around them."

As Milton Friedman infamously noted: "there is nothing so permanent as a temporary government program."

Critically, PWBM has estimated the scenario where all spending and revenue provisions in the Build Back Better Framework are permanent and the gap between spending and revenues is over $2.5 trillion... which, the last time we checked is not equal to zero... 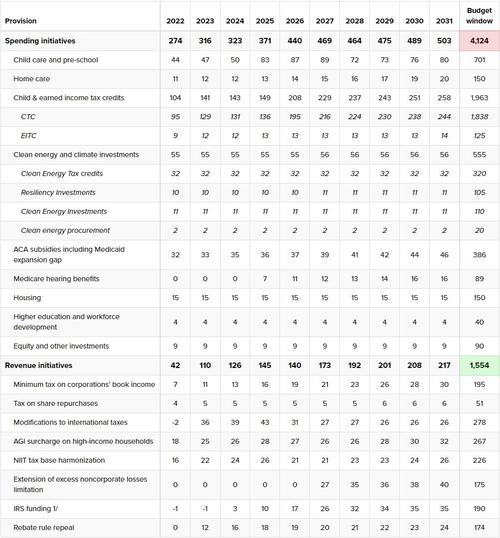 As Rich Lowry wrote at Politico recently, trying to redefine the cost of a multi-trillion bill as zero must rank among the most shameless, patently absurd attempts to change reality through a talking point ever attempted. It’s mind-bending logic that would mystify Lewis Carroll at the height of his creative powers.

Well, if anything has been confirmed by the last 24 hours, it appears the American public is done believing in fairy tales and is rapidly transitioning back to the real world.