EDITOR'S NOTE: Sam Bankman-Fried’s failure to run a tight and “clean” ship is a blow to whatever dream crypto HODLErs may have still had on establishing a currency independent of government or central bank control. Not only was Bankman-Fried, FTX’s founder and CEO, Washington’s poster boy for its image of a clean-run crypto operation. But he’s now being investigated for potential criminal activity; an egg on the face of his lobbyist supporters, and a potential deathblow to the crypto industry. JPMorgan’s Jamie Dimon sees this as a positive development, for it proves that the crypto movement is incapable of handling its own business let alone competing with centralized oversight and authority. In defense of crypto, its movement perhaps had the right intentions but its execution was more or less misguided if not delusional. It gives the government a reason to step in and take over. The crypto enthusiast's pipe dream has always been a foolish technophilic alternative to the status that gold has held for millennia; namely, a private monetary asset that’s beyond the strictures of fiat centralization and government control.

With many commentators mistakenly equating one person's record-breaking fraud - namely SBF hubris that he has full immunity from prosecution just because he is a prominent democrat donor - with the failings of the entire crypto space (odd how nobody said Jon Corzine bringing MF Global down with his fraud exposed the failings of fiat currencies) over the past 24 hours we have seen two very unexpected voices speaking out in defense of cryptocurrencies.

The first comes from Deutsche Bank which notes that just one year ago, in November 2021, the price of one Bitcoin exceeded $65,000, hitting an all time high, whereas just last week, Bitcoin hit a two-year low at just below $16,000 and the FTX crypto exchange deal collapsed.

But while DB's Marion Laboure writes that investors have suffered significant losses, she also believes "this second “crypto winter” will be a net positive because the FTX collapse will edge the crypto ecosystem closer to the established financial sector." Specifically, the DB analyst writes that the FTX crash spotlighted well-known structural issues in the crypto ecosystem: "insufficient reserves, conflict of interest, a lack of regulation and transparency, and unreliable data." And as a result of the FTX collapse, "market concentration is greater than ever, with Binance being the biggest winner." 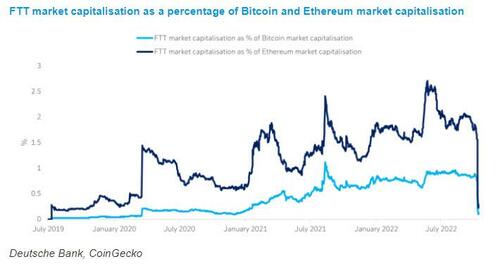 The German bank goes on to note that "every time a major player in the crypto industry fails, the ecosystem suffers a confidence crisis. There are significant consumer and retail losses, but so far there is no systemic risk. However, this confidence crisis requires crypto investors to trust in the “Tinkerbell Effect” even more; in other words, the value of a crypto asset will depend entirely on what people believe it is worth."

Tthe Deutsche strategist concludes that "as we have seen, crypto assets are high-risk products that can cause massive personal losses. For this reason, we continue to argue that regulators should quickly require crypto companies to comply with the rules imposed on traditional investment products. This would restrict crypto companies from fishing for financially illiterate consumers while governments develop overarching regulatory frameworks. The need is urgent. Several factors have aligned to create a potentially dismal situation for average consumers who may be susceptible to misleading information."

A more surprising defense of crypto came from JPMorgan crypto analyst Steven Alexopoulos, who - just hours after JPM's Nick Panigirtzoglou said that he expects more contagion and more liquidations as a result of the FTX collapse - wrote that far from being the death knell of the crypto sector, "the collapse of FTX a Painful Step Back but Might Prove to be the Catalyst that Moves Crypto Two Steps Forward." Below we excerpt from the JPM note (available to pro subs in the usual place).

With FTX emerging earlier this year as a white knight, bailing out troubled crypto-related companies, the news of FTX itself collapsing this week sent shockwaves through the crypto markets. While this is certainly a major short-term setback, we see the widely publicized collapse of FTX as potentially dramatically accelerating the timeline to which crypto-related regulation will be ushered in (similar to new banking regulation which followed the GFC).

As a result, we see the news surrounding FTX as one step back, but one that could prove to be the catalyst to move the crypto economy two steps forward (further unlocking the utility value of blockchain). In fact, we see the establishment of a regulatory framework as the needed catalyst to massively ramp the institutional adoption of crypto.

And the punchline which we have been making ever since the news of the FTX collapse first broke:

Moreover, while the news of the collapse of FTX is empowering crypto skeptics, we would point out that all of the recent collapses in the crypto ecosystem have been from centralized players and not from decentralized protocols.

How long before Jamie Dimon, who five years ago infamously warned he would fire any employee who was caught trading bitcoin before capitulating and making crypto a focal point of his bank's growth, and who now is certainly taking advantage of the crash in crypto to accumulate aggressively having learned his lessons from the first time, becomes one of the most vocal evangelists of digital currencies?