EDITOR NOTE: The world’s largest pension fund, Japan’s Government Pension Investment Fund, holds a portfolio weight of $1.7 trillion. So even when making the smallest of adjustments, its moves, no matter how small, tend to reverberate across the globe due to its sheer size, even triggering a global debt selloff. Most recently, the fund slashed its US Treasury holdings to 35% from 47%. Though the fund’s managers made little to no commentary on the rationale behind the reduction, it likely has to do with the Fed’s uncertainty over its next moves given the inflationary surge that took it by surprise, the US government’s infrastructure gridlock, and rising delta variant cases. The fund appears to be looking for more promising returns in both equities and foreign debt. Basically, investing in the US just got riskier and much less attractive--hence the cut.

The world's largest pension fund, Japan’s Government Pension Investment Fund, made a record cut to the weighting of Treasuries in its portfolio last fiscal year, sparking a global debt selloff.

GPIF slashed it US government bonds and bills to 35% of foreign debt holdings in the 12 months ended March, from 47% previously, according to an analysis by Bloomberg of the latest data. 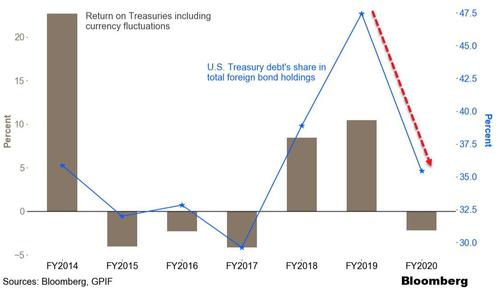 Source: Bloomber Notably, that level of exposure is below FTSE Russell's World Government Bond Index's 38% weight in Treasuries (so GPIF is actually underweight USTs on a global basis).

The giant Japanese fund shifted into mostly European sovereigns with France, Italy, and Germany benefiting the most... 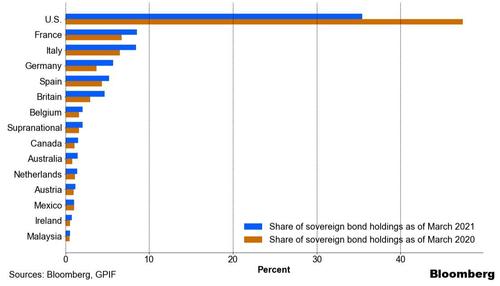 GPIF “substantially adjusted” allocations to bonds denominated in the dollar, euro and pound as an estimated tracking error was relatively high in the first half after the pandemic drove up market volatility, Eiji Ueda, the fund’s chief investment officer, wrote in the report.

Which helps explain overall Japanese official holdings of USTs over the past year... 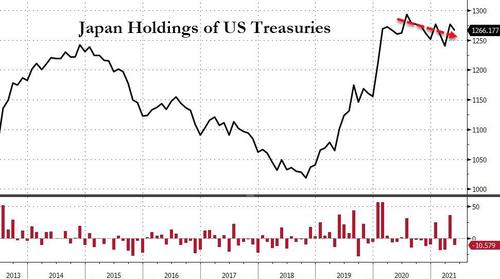 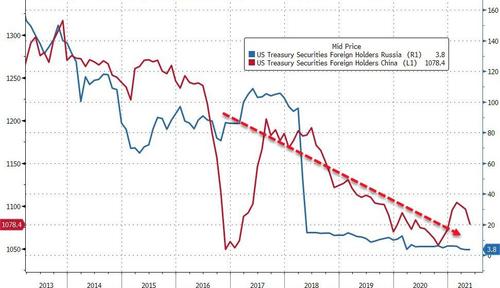 As with many other aspects of Japanese culture, "GPIF has a large influence over the investment decisions of other pension funds in Japan,” said Ayako Sera, a market strategist at Sumitomo Mitsui Trust Bank Ltd. in Tokyo. “What it does has an impact in the market.”

However, Sera suggests a lot of the selling was because hedged Treasuries were unattractive: “Current yield levels don’t compensate investors enough to take foreign-exchange risks,”

Something that is now very much incorrect as FX-hedged Japanese investors are getting the best yields since 2014... 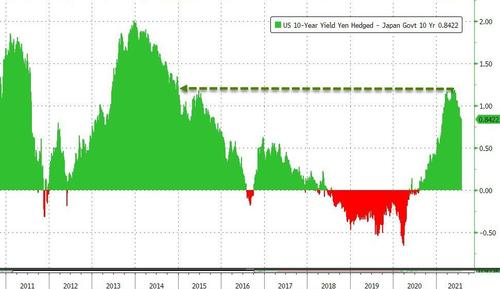 Interestingly as Morgan Stanley pointed out, we think that it is important to avoid the trap of forcibly fitting a narrative to lower yields, a trap investors dealt with merely four months ago:

Treasury yields rose sharply in March, largely due to selling from Japanese investors, based on their fiscal year-end considerations.

Yet, most investors mistook the rise in yields as validation for a super-hot economy, and the consensus bought into the idea that 10-year yields were headed above 2%. We cautioned investors that yields had overshot relative to the economic reality.

Over the coming weeks, economic data in the US couldn’t keep up with unrealistic expectations, and 10-year yields started grinding lower. 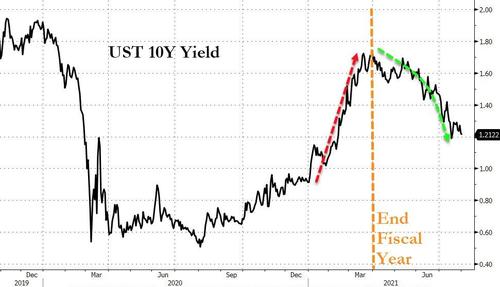 In other words, GPIF's decision to dump US Treasuries fooled the world into believing the recovery was accelerating... But of course, now that yields are collapsing again, the asset gatherers and commission-rakers conveniently brush it off as "QE-driven distortion"...

Does GPIF know something the rest of the world doesn't about just how 'transitory' inflation is?