EDITOR NOTE: In dealing with the pandemic, the government, The Fed and Wall Street are in cahoots to further empower themselves. In doing so, they are breaking the fundamental law of economics: supply and demand? Are they going to jail with no one and nothing to bail them out and taking us with them?

JPMorgan CEO Jamie Dimon told the Deutsche Bank Global Financial Services Conference attendees (virtually) that he sees a "good chance" of a fairly rapid economic recovery and is hoping things pick up in 3Q after what will be weak GDP this quarter.

While the all-seeing CEO warned that JPMorgan is "prepared for a scenario where recovery is slower," Dimon implicitly pointed out that for now there's nothing to fear but fear itself because "The Fed's liquidity, bringing out the bazooka, is propping up stock prices (as well as all other asset classes)." 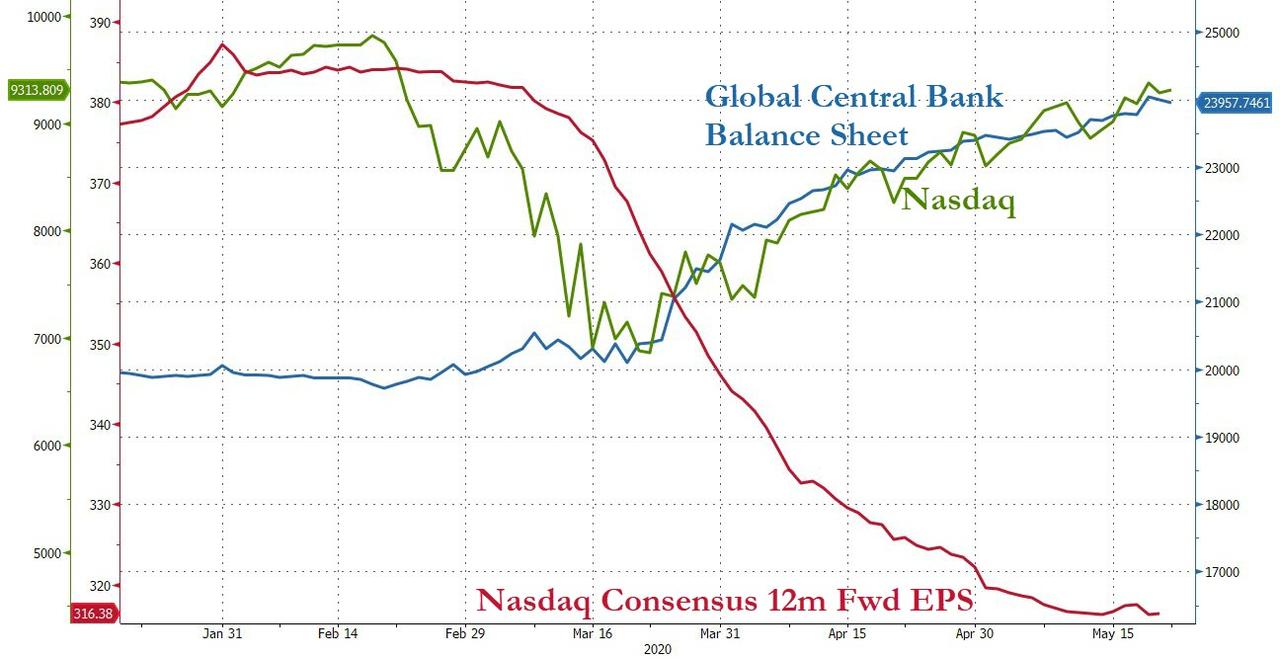 So the bazooka is working for now...?

However, as Mises Institute's Samuele Murtinu and Peter G. Klein noted in a recent article, while The Fed is doing "whatever it takes" to prop up the 'economy' (and market)... and explain why that's a very bad thing in the longer-term.

No sooner had the COVID-19 recession hit the US economy - with its mandatory business and school closures, travel bans, shelter-in-place orders, and a massive drop in commercial activity - than politicians, academics, journalists, and business leaders began calling for the Fed to save it.

a) $2.3 trillion in new loans to households, businesses, markets, and state and local governments;

b) a cut in the federal funds rate to 0–0.25 percent and a promise to keep it low indefinitely;

g) lowering banks’ loss-absorbing capital and reserve requirements. No one would accuse the Powell Fed of standing idly by!

These policies will do tremendous harm to the US economy.

The first and most obvious problem is that the COVID-19 recession results from policies and practices that caused a massive disruption to supply, not demand. When public officials and health experts started urging people to stay home, even before state and local officials made it mandatory (excepting officially designated “essential” workers), firms stopped producing and delivering many goods and services. Politicians and pundits, understanding little about supply chains, specialized physical and human resources, capital structure, and other aspects of production, and seeing the world only through Keynesian lenses, turned to their go-to remedy: monetary and fiscal stimulus. But printing money does not create real goods and services when workers are legally prevented from coming to work.

Policymakers claim to have learned from the 2008–09 financial crisis and subsequent recession. Now the Fed knows how to stabilize the economy! But what happened after the financial crisis? Note first that ultralow interest rates were supposed to alleviate the housing crisis by supporting home ownership. And yet, the home ownership rate at the end of 2019 was 65 percent, even lower than the rate at the end of 2007 (68 percent).

Second, artificially low interest rates and the promise to keep them low, along with promises to buy investment-grade corporate bonds (of firms in trouble), was supposed to help firms maintain employment levels. The employment rate for people aged 15–64 at the end of 2007 was almost 72 percent, a level regained only at the end of 2019. Does monetary policy operate with a twelve-year lag?

Third, short-term loans to “primary dealers”—the large financial institutions that receive initial injections of liquidity from the Fed—in exchange for collateral, including investment-grade debt, was supposed to keep credit markets functioning so that banks could avoid accumulating excess reserves. And yet excess reserves have skyrocketed from $1.8 billion in December 2007 to $2.7 trillion in August 2014. Nonperforming loans, another measure of bank performance, about 1 percent in the third quarter of 2007, rose to almost 6 percent in 2010 before falling back to 1 percent in the second quarter of 2018. It is hard to credit monetary policy for any improvements in the banking sector.

Austrian business cycle theorists have long argued that monetary expansion redistributes wealth via “Cantillon effects,” leads to malinvestment with an intertemporal allocation of resources not in line with consumers’ time preferences, and ultimately generates price inflation. Moreover, today we have the “lower-bound” problem: with interest rates already near zero, there is little the Fed can do to stimulate real economic activity.

And yet, easy money is as popular as ever. Could “modern monetary theory” (MMT), the trendy theory promoted by Alexandria Ocasio-Cortez among others, play a role? Most mainstream economists reject MMT, and Austrians have compared it to the old “state theory of money” decisively smashed by Carl Menger. MMT proposals go way beyond simply monetizing the federal deficit; indeed, its proponents envision a sort of Caudillo scenario in which the sovereign can never default (though we have counterexamples such as Venezuela), in which inflation only kicks in under conditions of full employment (again, ignoring Italy in the 1980s), and in which taxes are unnecessary because the government buys goods directly, at whatever prices it wants. In the minds of its proponents, MMT lets us have all the federal programs we want without sacrifice, through the magic of the printing press.

Although no one at the Fed is openly advocating for MMT, Chair Powell has a remarkably aggressive view of monetary policy. He told an interviewer this week:

In the last crisis, the problems were in the financial system. So they were providing support for the banking system. Here, really, the problems are in what we call the real economy, actual companies that make and sell goods and services. And what's happening to them is that many of them are closed or just not having any revenue.

And we're trying to do what we can to get them through this period where they're perfectly good companies that have had, you know, sound financial condition as recently as February, but now they have no business. And they have fixed costs. So we're trying to help them get through that period.

In other words, Powell sees no difference between the objectives of monetary policy and other government programs designed to prop up firms, industries, and other favored groups. The Fed is simply another government planning agency, not the “independent” monetary authority with a long-term, nonpolitical mandate of controlling inflation (or, since the 1970s, achieving both low inflation and “full” employment).

Most critics of the Fed’s response to COVID-19 recognize the futility of using expansionary monetary policy to fight a real supply shock. But there are more fundamental reasons to worry about the long-term effects of “unconventional” monetary policy such as quantitative easing.

Open-ended purchases of Treasurys and government-guaranteed and commercial mortgage-backed securities results in the prices of these securities being artificially high. With government securities, purchasing long-term bonds means that the Fed pegs their yields. This opens the door to political interference, with the government pushing the Fed to fund its deficit under the guise of promoting social welfare. This of course make it easier to increase government spending on a variety of projects, in addition to generating price inflation and other distortions. As pointed out by Austrian business cycle theory, inflation driven by credit expansion leads to artificially low interest rates, which incentivize entrepreneurs to overinvest in interest rate–sensitive projects whose profitability is driven by an artificially high demand and encourage banks to engage in moral hazard, investing in risky operations (because of lower profits from “normal” operations) in the expectation of future bailouts.

More generally, the Fed's interventions to fight the COVID-19 recession illustrate the "ratchet effect" described by Bob Higgs in Crisis and Leviathan. Quantitative easing was described after the financial crisis as a once-in-a-lifetime intervention designed to forestall a collapse of the global economy. Today, it is seen as an unremarkable, perhaps even inevitable, response to the COVID-19 crisis. As many of us predicted at the time, open-ended purchases of mortgages and securities became simply another “tool” in the Fed’s toolbox, ready to be brought out whenever needed. Is there any doubt that the other “extraordinary” measures undertaken in the last few weeks will become part of the “new normal”? (We can certainly expect the same for fiscal policy—one writer’s call for a $10 trillion fiscal stimulus will make the next call for “extraordinary” stimulus seem tame by comparison.)

Private property, markets, and prices, far from applying only to “normal” times, are needed even more urgently during a crisis. Likewise, the Fed’s extreme measures are exactly the wrong response to the COVID-19 recession. Loose money—a bad idea when the economy is strong—is making a bad situation worse.