JPMorgan Is Statistically The Most Dangerous Bank In America EDITOR'S NOTE: With over $3 trillion in assets, JPMorgan Chase is clearly the largest bank in the US. But any measure of its size goes far beyond its assets. It has faced stiff penalties for felony counts of rigging the precious metals market. It is perhaps the most interconnected of all US banks with a level of risk exposure that far exceeds its peers. In short, JPM may be among the most dangerous Too-Big-To-Fail financial institutions in the world. Yet, neither the government nor JPM’s own board has criticized its CEO, Jamie Dimon, to any extent suggesting he ought to be replaced. Instead, regulators tend to focus on low-hanging fruit like Wells Fargo whose violations and risks are more symbolic than functional. JPM’s Dimon often brags about the bank’s “fortress balance sheet.” If Dimon is correct, the illusion of a fortress rests not with JPM’s own operations but with the government’s actions and inactions, both of which constitute a significant part of its risk-seeking foundations. 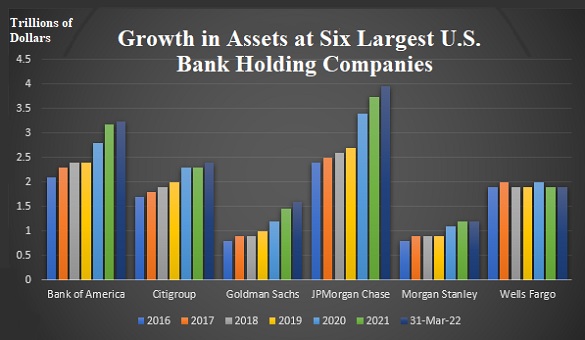 The long-tenured Chairman and CEO of JPMorgan Chase, Jamie Dimon, likes to use the phrase “fortress balance sheet,” when talking about his bank to Congress or shareholders. But the data stored at its federal regulators show that the bank is, by far, the most systemically dangerous bank in the United States. And, despite its high risk profile, neither Congress nor federal regulators have restricted its growth. Its assets have soared by 65 percent since the end of 2016 and stood at $3.95 trillion as of March 31, making it the largest bank in the United States.

Making this situation even more dangerous, the bank has admitted to five criminal felony counts over the past eight years and a multitude of civil crimes and multi-billion dollar fines — all during the tenure of Dimon. Neither Congress nor federal regulators nor the Justice Department that brought those felony counts has demanded that Dimon be replaced. The Board of Directors of the bank has been equally obsequious toward Dimon, awarding him a $50 million bonus after the bank admitted to its fourth and fifth felony counts for “tens of thousands” of trades that rigged the precious metals and U.S. Treasury markets.

Our data comes from the National Information Center, a repository of bank data collected by the Federal Reserve. It is part of the Federal Financial Institutions Examination Council (FFIEC), which was created by federal legislation to create uniformity in the examination of U.S. financial institutions by the various banking regulators.

Each year the National Information Center creates a graphic profile of banks measured by 12 systemic risk indicators. The data used to create these graphics come from the “Systemic Risk Report” or form FR Y-15 that banks are required to file with the Federal Reserve. To measure the systemic risk that a particular bank poses to the stability of the U.S. financial system, the data is broken down into five categories of system risk: size, interconnectedness, substitutability, complexity, and cross-jurisdictional activity. Those measurements consist of 12 pieces of financial information that banks have to provide on their Y-15 forms.

The most recent data is for the period ending December 31, 2020. It indicates that in 8 out of 12 measurements – or two-thirds of all systemic risk measurements – JPMorgan Chase ranks at the top for having the riskiest footprint among its peer banks.

Equally unnerving, JPMorgan Chase ranks number one in the instruments that played a major role in blowing up Wall Street in 2008 – OTC (Over-the-Counter) derivatives. These are private contracts between two parties and lack the transparency or protections of being traded on an exchange. This means if the counterparty defaults and the exposure is large enough, it could put a federally-insured bank at risk. This is not a hypothetical scenario. The giant insurer, AIG, blew itself up in 2008 because it was holding tens of billions of dollars in OTC derivative contracts for the biggest banks on Wall Street, on which it could not pay its obligations. The U.S. government was forced to nationalize AIG and paid more than $90 billion to the banks for their AIG derivative contracts and securities lending obligations. According to the data, JPMorgan Chase has the largest exposure to OTC derivatives, with $44.38 trillion exposure.

The Dodd-Frank financial reform legislation of 2010 was hyped as ending the hubris of OTC derivatives. It was supposed to force these vehicles into the sunlight of exchanges and central clearinghouses. But that hasn’t happened. Corporate business media is simply declining to report on it. According to the Office of the Comptroller of the Currency, the federal regulator of national banks, as of March 31, 2022, only “43.4 percent of banks’ derivative holdings were centrally cleared.” (See page 13 at this link.) That statistic comes 12 years after Dodd-Frank was signed into law, showing just how lax federal regulators have been in enforcing the congressional intent of the law.

Adding to the systemic dangers of JPMorgan, it is a pivotal cog in the U.S. payments system. The bank was responsible for $510 trillion of the U.S. payments system in 2020 – a 51 percent increase over its size in that category in 2019. The $510 trillion is more than the next three largest banks in that category combined: Bank of New York Mellon at $194.23 trillion; Citigroup at $176.57 trillion; and Bank of America at $138.34 trillion.

And despite Dimon perpetually bragging about the bank’s “fortress balance sheet,” the Federal Reserve has yet to explain why a unit of JPMorgan Chase (J.P. Morgan Securities) needed to secretly borrow a cumulative $2.59 trillion in repo loans from the Fed in the last quarter of 2019 – long before the first case of COVID-19 appeared in the U.S. (See chart below.)

The Senate Banking Committee has told Wall Street On Parade that it will be scheduling its annual hearing with Wall Street CEOs before the year is out. The Committee needs to stop using Wells Fargo as a convenient punching bag and focus on the dangerous elephant in the room – JPMorgan Chase. (By the way, Wells Fargo did not rank number one in even one of the 12 systemic risk categories.) 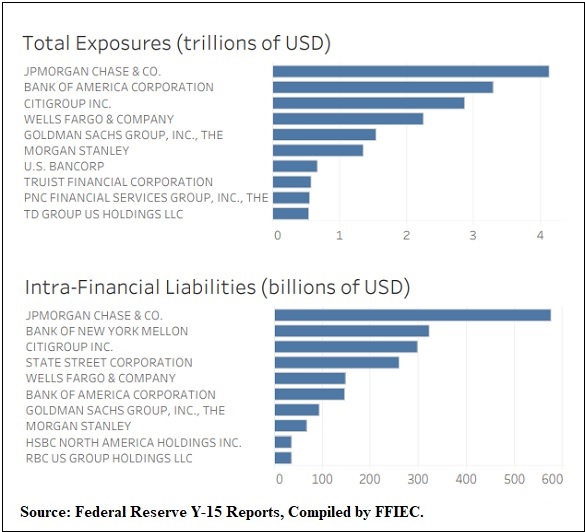