EDITOR NOTE: JPMorgan clients got a bit of a shock and a strong dose of confusion when the bank sent mixed messages last week--one analyst warning that JPM is slated for its biggest bout of forced selling, around $200 billion, while two other JPM analysts virtually discredited the analyst, describing the situation at JPM not as muted but bullish. The article you’re about to read slants a bit toward the technical side. But it gives you a clear picture as to how a large financial institution like JPM manages its contingency messaging, possibly in order to save trust over truth.

Last Tuesday, JPMorgan's in-house quant star (and perpetual skeptical foil to the bank's other far more permabullish strategists such as Marko Kolanovic), Nick Panigirtzoglou - who has far less of a media foot print than Marko - spooked Wall Street when he estimated that quarter and month-end is poised for one of the highest bouts of forced selling in history, as between US pension plans, the Norwegian sov wealth fund and Japan's pension giant, the GPIF, some $200 billion in quarter-end stock selling was on deck due to negative rebalancing flow.

Panigirtzoglou was not shy about the implications of this massive outflow, stating clearly that "This is the most negative rebalancing flow since the virus crisis" and adding that "this negative rebalancing flow becomes even more problematic given this month’s sharp decline in equity market depth" referring to the latest collapse in market liquidity which would only exacerbate the adverse impact of forced selling. 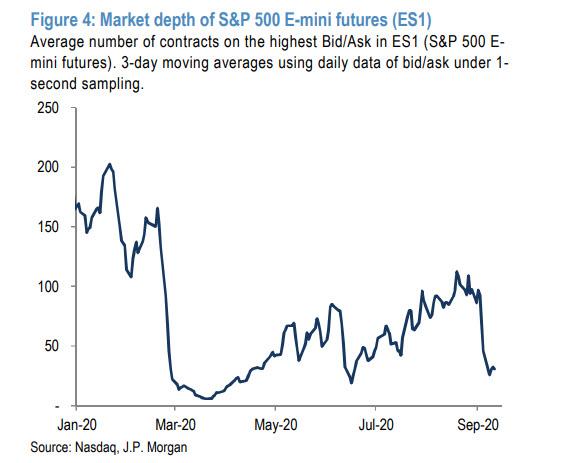 Forced selling aside, Panigirtzoglou also made another critical observation, which however is beyond the scope of this article, even though it reflects a critical aspect of the broken capital markets, namely that "this month’s sharp decline in equity market depth is a reminder of how quickly liquidity conditions can deteriorate in equity markets and raises the risk of more abrupt equity market moves going forward."

In any event, it appears that the angry blowback from clients who read Panigirtzoglou's note in which JPM warned of a potential market dump were not happy to learn that there is a reason why they need to hedge or - heaven forbid - sell, and escalated their concerns to the point where this morning the two heads of JPM's global quant and derivative strategy, Bram Kaplan and Marko Kolanovic, were dragged into writing a note meant to minimize (and dare say discredit) the implications of the report published by their quant colleague just a few days earlier.

Without hyperlinking or even referring to Panigirtzoglou's cautionary note on the topic of forced month-end selling - after all everyone read that - Kolanovic and Kaplan (henceforth K&K) "explain" that in their view there is a notable difference between quarter and month-end rebalancing, which is precisely the loophole JPM needed to avoid being pigeonholed for being both bearish (if one reads the Panigirtzoglou report) and Bullish (as per any report from KK), to wit: "Equities have significantly underperformed bonds on a month-to-date basis (by ~8%), and although they have outperformed quarter-to-date (by ~5%), our analysis suggests that a large majority of these portfolios rebalance on a monthly rather than quarterly frequency."

As a result, Kolanovic and pal concludes that "rebalances by these fixed weight asset allocation portfolios will provide a tailwind to equities next week."

Come again? The reason for the confusion is that one week after JPMorgan quant Nikolaos Panigirtzoglou wrote, and we quote:

... two other JPM quants were immediately tasked to spike the original report and to convince clients that, contrary to what they may have read elsewhere at JPMorgan, the quarter- and month-end rebalancing is really great news, and will actually serve as a "tailwind to equities next week."

Not only that, but while completely ignoring the point Panigirtzogou made about collapsing liquidity exacerbating the impact of quarter-end flows, K&K claim that "based on our model, these rebalances could drive ~1% of equity outperformance into quarter-end all else equal" (what may make all else not equal are changes in market levels and relative performance, to wit: "i.e. equity outperformance/underperformance would decrease/increase the amount to be rebalanced, respectively)."

What this means explicitly is that now that stocks have slumped sharply since last Tuesday, rebalancing may indeed be far less due to the investing public's frontrunning of said selling, which of course makes forced selling less needed as equity outperformance relative to bonds has moderated sharply. Of course, if K&K inspire enough of the market to now reverse, and frontrun the lack of selling, which they frontran last week when they sold, well then buy stocks is what Kolanovic and Kaplan would want you to believe.

Of course, by this point the confusion is so profound that nobody knows what's going on anymore, pension funds may still sell $200BN (or they may not), but one thing that is certain is that this bizarre confusion within one strategy inside JPM shows just how political even market analysis has become as the largest US bank, and how much confusion a simple topic as forced month-end selling (or buying) can create at one of the most closely followed desks on Wall Street.

Oh, and for those keeping track, anyone who traded on Panigirtzoglou's reco last week and sold ahead of next week's forced selling - and today's rout - is sitting pretty and deciding if and when to buy back into the market, while those who bought expecting "a tailwind" from the discounted buying of equities into month/quarter-end as K&K predicted this morning, may want to have a talk with their JPM sales coverage.