EDITOR'S NOTE: For most gold investors, news that the JPMorgan metals desk illegally cheated the system is old and well-known. From 2008 to 2018, rumors of JPM’s spoofing made their way from the margins of fringe financial reporting to the DOJ courts where the hidden hand of executive machination is just now being discovered. What you probably didn’t know was the annual profitability of JPM’s criminal actions. In the course of a decade, the rogue bank made up to $234 million each year. And in 2020, the bank made around $1 billion in “arbitrage,” which (we’ll have to find out) might be their sanitized term for “illegal spoofing.” If the day-to-day price volatility in the precious metals market causes you to make rash decisions with regard to unloading your positions, you should always be a little suspicious if the market doesn’t match the longer-term fundamental outlook of the market. There’s more paper gold and silver out there than there is actual metal stock. When bullion banks are involved, prices are easily manipulable (just something to think about).

Former head of precious metals at J.P. Morgan, Michael Nowak, is currently on trial with colleagues Gregg Smith and Jeffrey Ruffo in Chicago regarding whether or not they conspired to manipulate gold and silver markets.

While that may not be news to many Zero Hedge readers, some of the inner workings of JPMorgan's metals desk, as detailed in a new Bloomberg report, may be.

It was revealed in court that the bank's annual profits from its metals desk, which aren't usually broken out in the bank's earnings reports, made astonishingly consistent "annual profits between $109 million and $234 million a year between 2008 and 2018." 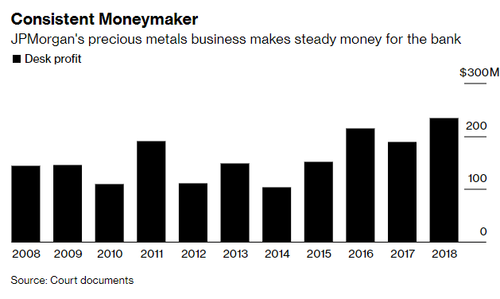 Those profits came mostly from trading in financial markets, Bloomberg noted, but trading and transporting metals also made the bank about $30 million, per year, on average.

In 2020, amidst the Covid panic, the bank made $1 billion from precious metals due to "unprecedented arbitrage opportunities".

The bank holds tens of billions of dollars worth of gold in various vaults it has in places like New York and London, Bloomberg writes. It is the biggest player of several "bullion banks", the report notes, with about 40% of all transactions in the gold market in 2010 clearing through J.P. Morgan. 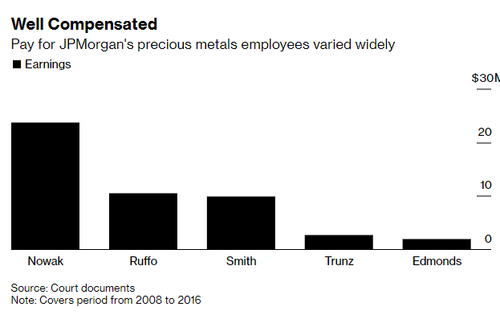 The bank's metals traders were "remunerated handsomely", the report notes. In fact, they made so much money that the jury audibly gasped when it learned how much they made. Ruffo made $10.5 million between 2008 to 2016 and Smith received $9.9 million. Nowak cleared $23.7 million over the same period of time.

Perhaps this is why the bank is often brought up anytime there are rumors and unconfirmed discussions about large short positions in the gold and silver markets. The bank has also been in the spotlight for spoofing being "open strategy" on its trading desk.