EDITOR NOTE: What are the major fundamental factors affecting gold prices right now? Most of them are listed below. From the “Fed put” to the massive Gold ETF inflows to the upcoming election. Some may indicate near-term directional bias; others feed into a longer-term forecast. But all are saying the same thing: the gold dip is a buy, for fundamental reasons that will likely take years to play out. The article lists all of these factors below; something that no serious investor should ignore. 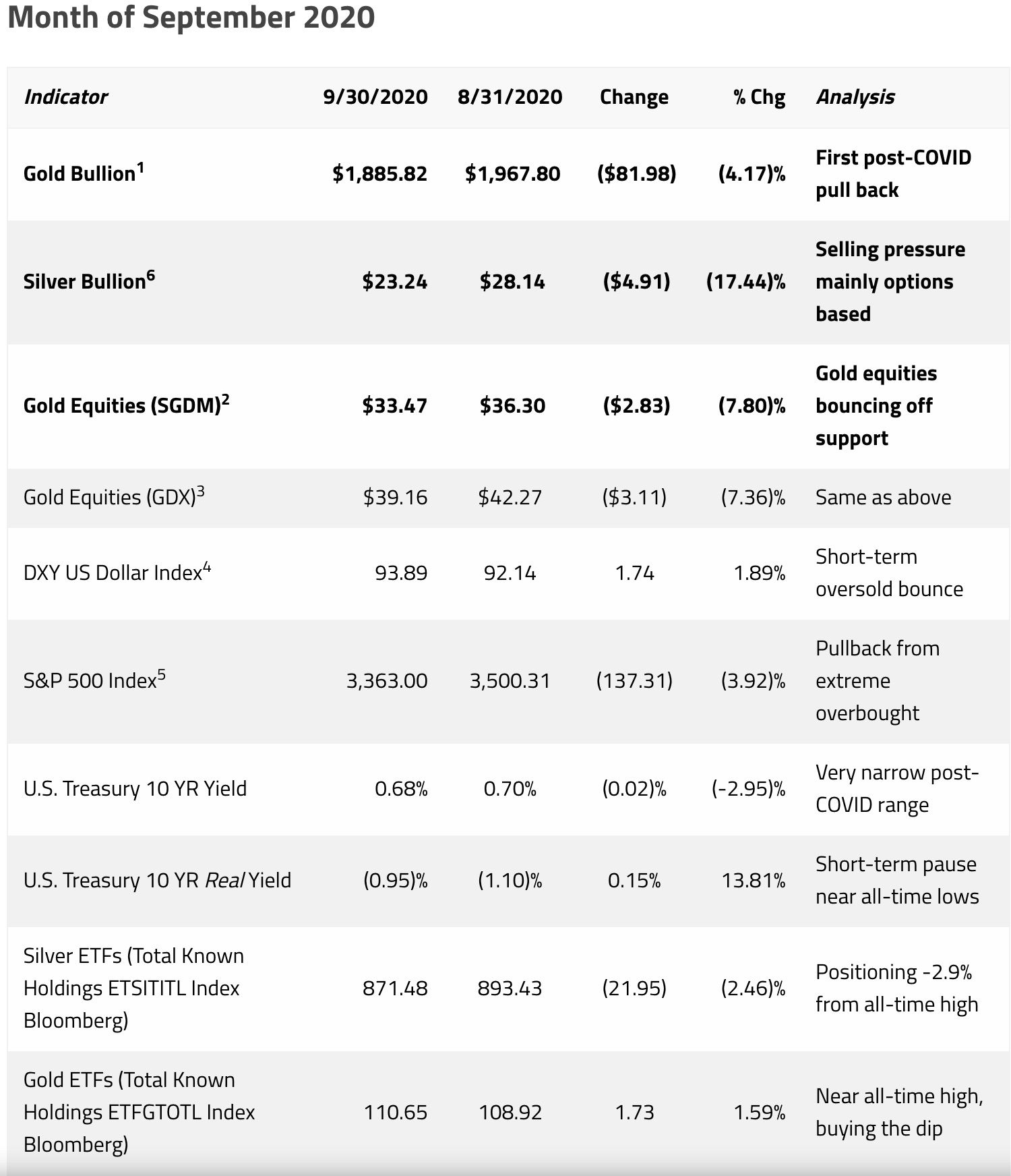 From Gold’s August 6 peak price of $2,064, gold has corrected to $1,886, down 8.62%. Since breaking out the $1,375 major resistance level, gold bullion has traded in step function manner of channel projections and Fibonacci retracement levels acting as support and resistance targets. Currently, gold has pulled back in a typical A-B-C correction back to the support zone of the current trading channel range (see Figure 1). 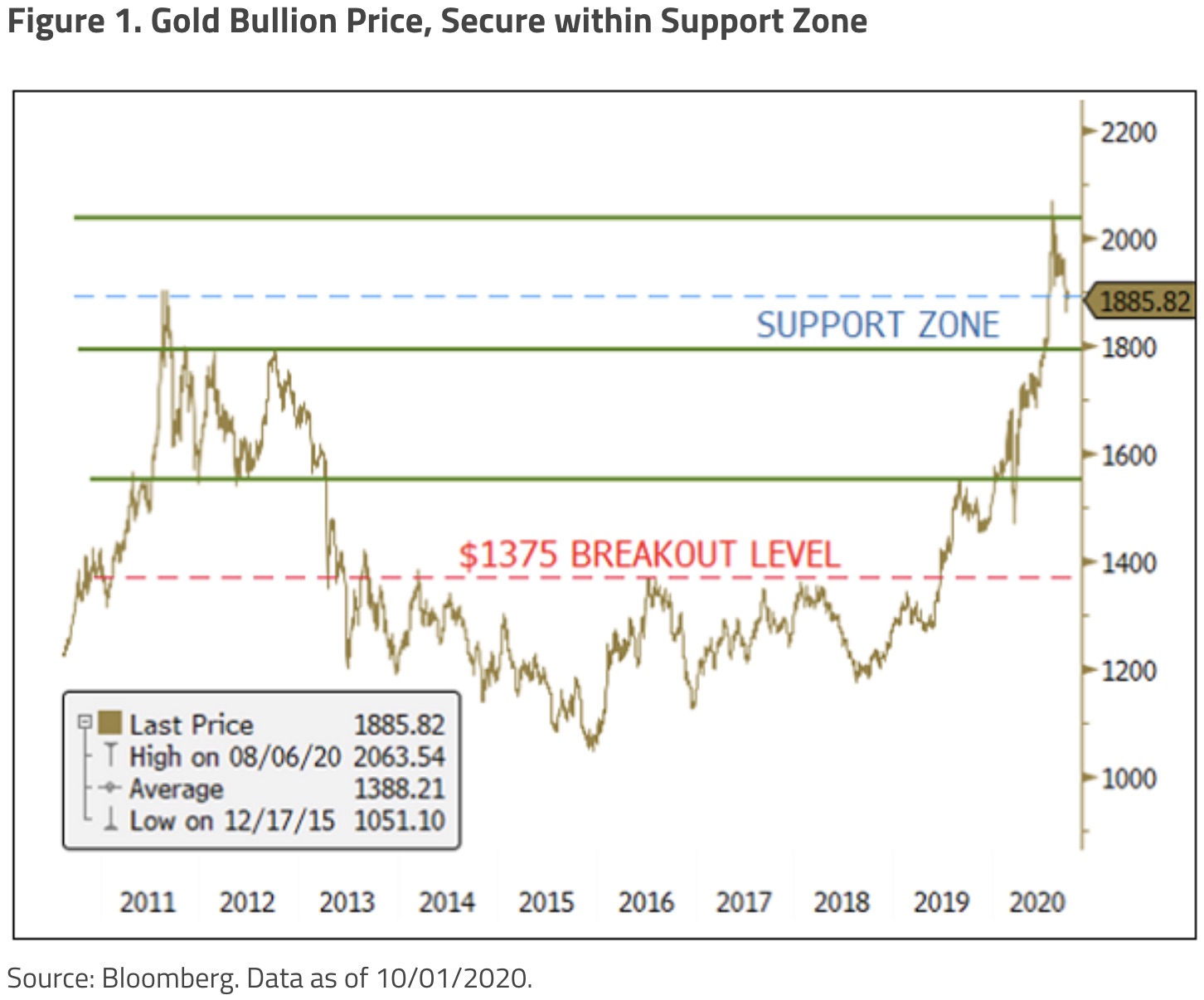 Breaking down the positioning of gold bullion, gold held in ETFs closed within less than 0.3% of its all-time highs. Gold held in ETFs has long been more representative of fundamental longer-term holders, and less prone to flow trading than gold futures. In Figure 2, we highlight gold holdings in ETFs and a combination of Commodity Futures Trading Commission’s (CFTC) Gold Non-Commercial Net Positions plus net gold held in managed futures, expressed in millions of ounces.

Gold held in non-commercial and managed futures represents a “trading book,” which we call “Trading Futures” for lack of a better descriptor. Gold in ETFs tracks macroeconomic variables (i.e., M2 money supply, the U.S. dollar, real interest rates, etc.) to a high degree (R-squared of 0.64 versus R-squared of 0.04 for trading futures since January 2008). The positioning swings in these trading futures account for a large degree of gold’s pricing volatility over time. Since 2008, gold trading futures net positioning has averaged 30 million ounces with a two standard deviation band of 0-60 million ounces and has exhibited very choppy trading patterns over the years. Gold in ETFs has a much steadier profile and is more reflective of the longer-term gold picture. 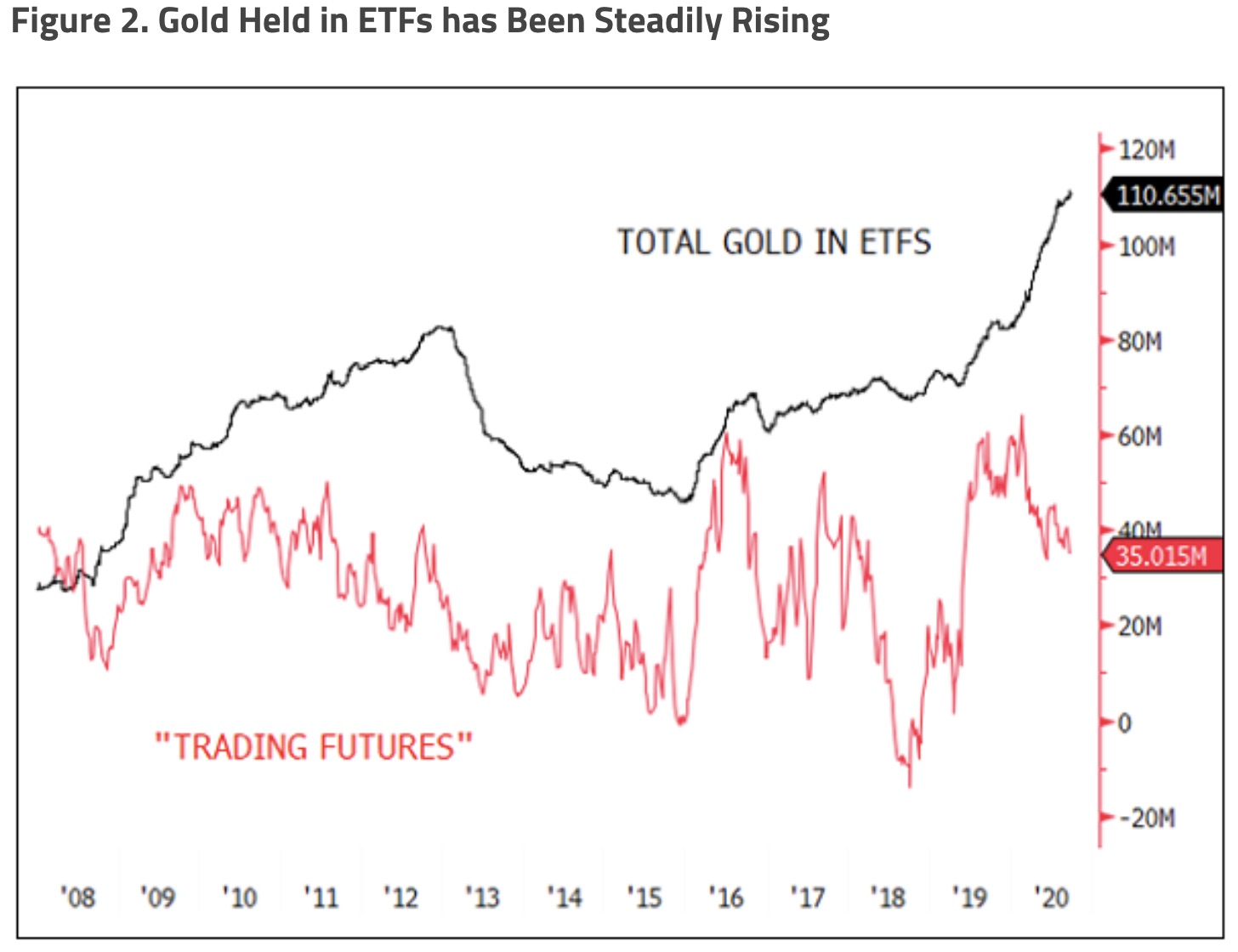 Systematic funds re-risking, new retail investors entering and manic options activity created an almost bubble-like stock market melt-up during the summer. Since the stock market’s peak, market depth and liquidity have been thinning out. September featured a rather sizeable quadruple witching expiry; exposures to most asset classes were reduced further.

The U.S. presidential election risk has been building and is now the leading risk factor for the markets. We see significantly elevated expected volatility in the options market around election time in early November and for several weeks that follow. For these reasons, investment funds have been reducing their exposures, including gold. This reduction in positioning is reflected in the gold trading futures Trading flows in a market with limited market depth and low liquidity will produce wild price swings in all asset classes, including gold. Long-term holders need to separate trading noise from market signals, especially in this environment. As stated earlier, there has been a notable decrease in broad market depth and liquidity. At the same time, options activity has spiked higher, especially in deep OTM (“out of the money”) calls.

For gold bullion, we see this pullback as a short-term correction driven mainly by fund flows in a thin market. The primary macroeconomic factors remained bullish for gold during this correction, with only minor price changes well within trading bands. In Figure 3, we highlight the most recent flow activity. Gold in ETFs was steadily buying the dips while the gold trading futures were reducing positions (producing the dips). 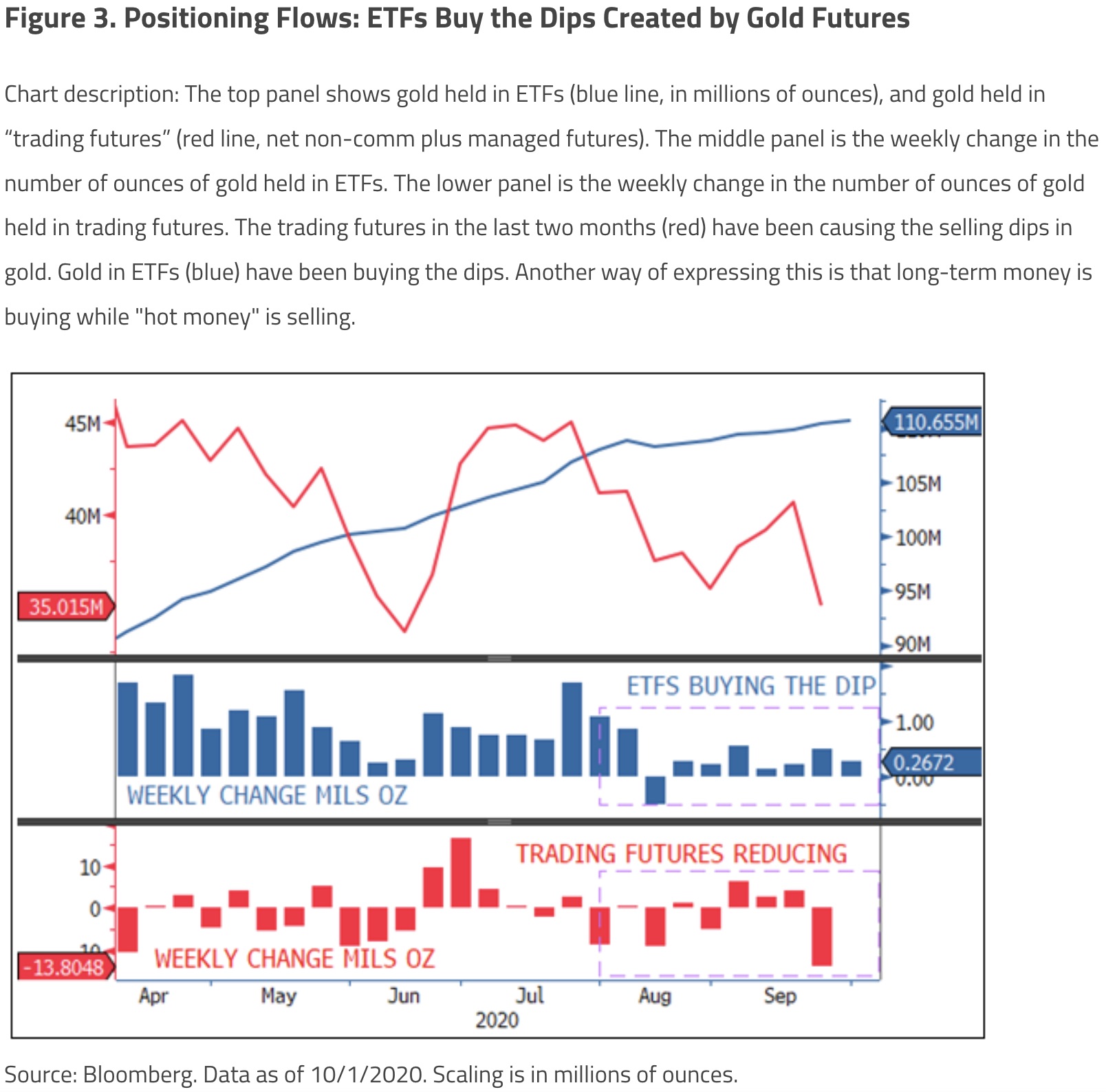 King World News note: These are not predictions by Paul Wong, just observations on the possible election outcome and the corresponding impact on the gold market.

Paul Wong continues:  The upcoming U.S. presidential election is shaping up to be quite unpredictable and chaotic in terms of the possible outcomes. For gold, we see two main results that may have less ambiguity. The first is a Biden-Democratic sweep and a smooth uncontested transition of power. Under this scenario, with Democratic majority control, we expect a much larger fiscal stimulus bill to be passed almost immediately. Debt may increase by $2-3 trillion to finance the additional stimulus plan, the U.S. dollar (USD) will weaken, and breakeven yields will rise, resulting in deeper negative real yields (this assumes the Federal Reserve [Fed] contains nominal yields). This scenario is very bullish for gold, as it is a continuation of current bullish gold dynamics in a more accelerated manner. The other scenario would be a Trump-contested election, resulting in market chaos that leads the Fed to ramp up QE (quantitative easing) to inject liquidity.

Bottom line? Gold could range from outright bullish (flight to safety) to being a relative outperforming asset (systematic liquidity issues). But by definition, chaotic systems are inherently unpredictable.

Silver had a very sharp correction in September, falling more than 17% to close the month at $23.24. We remain bullish on silver despite the recent volatility.

Like gold, the selling in silver was not driven by fundamentals but by forced selling. SLV (iShares Silver Trust, the largest silver ETF) was likely caught in a gamma related selloff, as selling forced dealers to wind down their hedges (to sell SLV) to maintain their delta hedge positions. Like selling activity among other asset classes, the silver selloff was not characterized by panic, and although volatility was higher, it was contained…

Gold equities fell 7.4% in September to retest and bounce off of key support (the intersection of chart support, 100-day moving average and Fibonacci retracement levels), Figure 4. Again, the story is the same: Listless trading before a thin volume sharp drop around OpEx and then gradual recovery — all consistent with a correction. Internal breadth measures continue to show bullish leadership (i.e., high beta gold equities are still in an outperformance trend versus gold royalty stocks and other lower beta gold equities). There were also no signs of increased protection buying or hedging (i.e., put buying in GDX or GLD remained flat). There were no signs of panic, and daily trading volume remained muted, but there was a noted reduction in open interest (calls and puts) in GLD and GDX. Again, this reduction in open interest occurred across the board in most major asset classes as investment funds reduced exposures throughout September.

The long-term positive fundamentals of gold equities remain unchanged. My colleague Doug Groh, Senior Portfolio Manager, reports: “Miners recently profiled their operations at numerous conferences and despite COVID precautions, profits are robust. Cash costs are much better than ten years ago, and with the better gold prices, balance sheets are in very healthy shape. Free cash flow is being returned to shareholders through dividends and buybacks and is not yet going to expensive projects or acquisitions. We think the late summer pullback in gold equities — which was not dramatic — is constructive given such a strong summer. Autumn pullbacks could be short as Q3 profit reports are likely to be exceptional.” 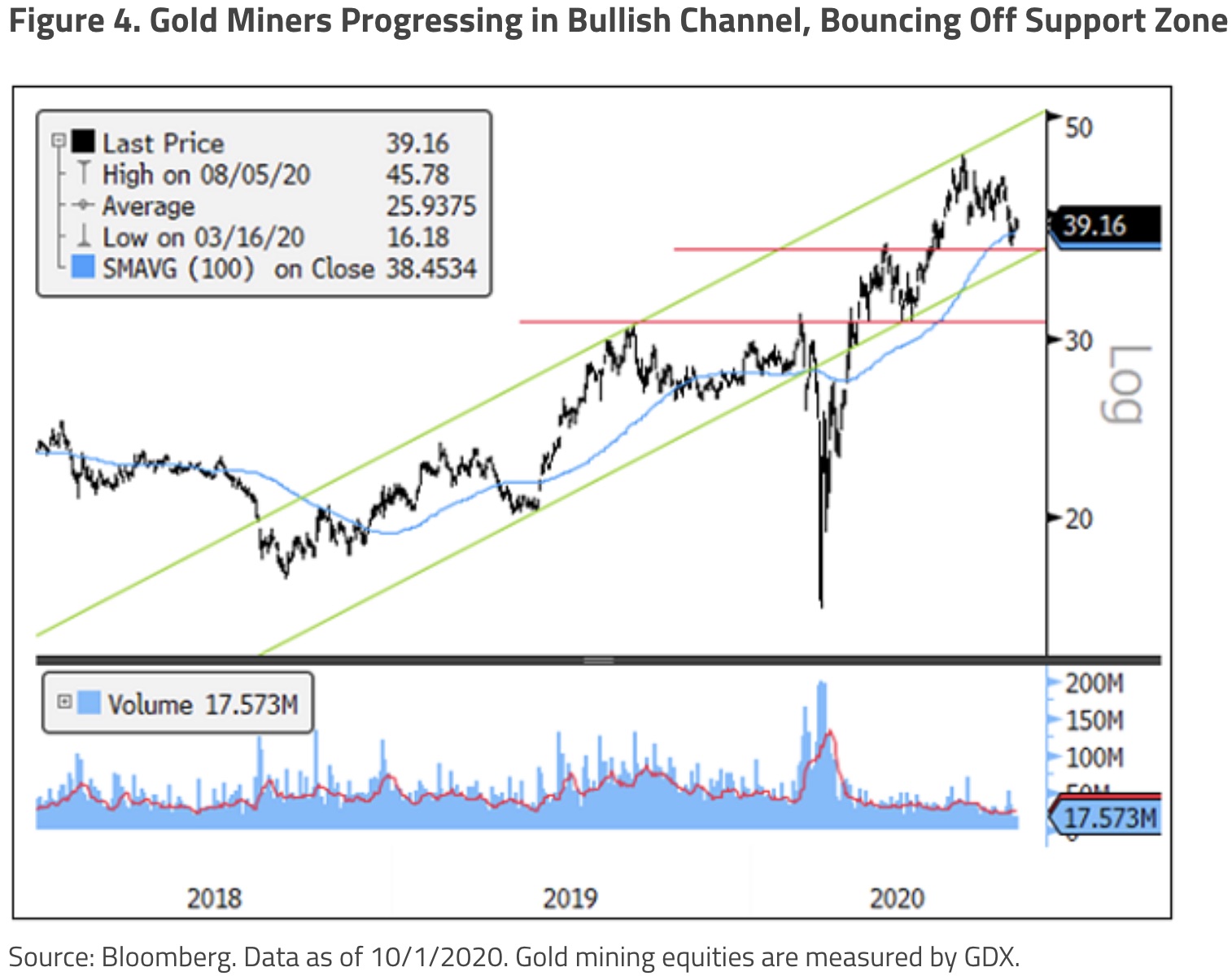 With the September FOMC (Federal Open Market Committee meeting), the Fed policy framework has moved to outcome-based forward guidance and average inflation targeting (AIT). The implications for gold is that future rate hikes will occur only by achieving “maximum employment levels” as defined by the Fed. Not only will Fed policy remain accommodative even after lift-off, but it will be asymmetrical as the Fed will only respond to an inflation shortfall (ignore overshoots, boost if it undershoots). “Lower for longer” is morphing to “lower forever.” AIT, however, remains vague. The Fed has not stated how they will achieve an average of 2% inflation. Tolerating and generating 2% inflation are wildly different. For gold, the implications are that severe sell-offs due to events such as the 2013 Taper Tantrum will not occur in this cycle for many years out. A repeat of the Fed rate hikes of 2017 and 2018 will have a much more difficult hurdle to clear in this cycle.

With Yield Curve Control (YCC) shelved for now and Negative Interest Rate Policy (NIRP) a no-go, to achieve the Fed’s stated goals of 2% average inflation target, more QE and an increase in the average weighted maturity are the likely main options left. QE on its own, as the past decade has demonstrated, is incapable of generating inflation. The goal of averaging 2% inflation without significant fiscal stimulus is likely to fail much as it had during the prior decade. If the goal is to heat up the economy to get inflation higher, fiscal authorities will need to increase debt and spend. Simultaneously, the monetary policymakers will need to print money and suppress and keep real rates deeply negative. Financial conditions will need to remain accommodative and loose throughout to facilitate the process.

Since the GFC (global financial crisis), the Fed has been printing money and buying bonds, and the proceeds from maturing securities have been continuously reinvested. Positions that are never unwound is essentially debt monetization in a somewhat covert manner. Most notable is the failure of the transmission mechanism as money printing becomes mostly trapped in the banking system, and the velocity of money collapses. Limited money supply makes its way into the real economy resulting in continuous low growth despite massive amounts of QE. Much of the liquidity, however, makes its way into financial assets resulting in asset prices skyrocketing. Soaring debt and asset prices become increasingly untethered to the realities of the economy.

To bypass this broken transmission mechanism and provide more fiscal stimulus, we see central banks edging closer to Modern Money Theory (MMT) or an MMT-like process (whether by design or by necessity). Since COVID, most developed economies have been forced to shift closer towards MMT to deal with the sheer magnitude of stimulus required. The Fed has already monetized the first wave of fiscal stimulus in a swift, coordinated fiscal-monetary policy manner. Bypassing the transmission system (the banks) and going from the central bank directly to the Treasury account is overt debt monetization.

One can easily see the temptation, necessity, or the “logic” of going this route for policymakers down the road, especially when the next crisis hits — the implication for gold is the next level of bullishness. Whether the drift towards MMT continues or not, the Fed cannot allow a meaningful tightening of financial conditions. This means that a stronger USD and higher real yields are not likely to occur without the Fed intervening to restore accommodative conditions.