EDITOR NOTE: If you can remember, late 2020 and early 2021 saw the Producer Price Index (PPI) rising, the first indication that inflation was about to hit consumer goods and services. Long before this, CEOs and CFOs of publicly traded companies began talking about rising “input costs” during quarterly earnings conference calls; an even earlier indication that inflation may show in the coming months’ PPI and eventually CPI (Consumer Price Index) reports. In the last three quarters of 2021, mentions of inflation have skyrocketed by over 1,100% year over year--a record high, dwarfing anything we’ve seen in the last two decades. It doesn’t take a rocket scientist to figure out what this means. A good portion of these costs are going to be absorbed by us--the consumers. So, look forward to higher inflation across different segments of the economy. “Transitory” no more, so it seems.

Labor inflation mentions have picked up the most, Bank of America strategists say

Mentions of inflation on earnings calls have jumped to record levels, accelerating as companies that make up the S&P 500 report their latest quarterly results, according to analysts at Bank of America.

About three-quarters of S&P 500 earnings have been reported for the second-quarter, with “inflation” mentions soaring about 1,100% year-over-year, BofA Global Research said in an equity and quantitative strategy note Monday. That exceeds the year-over-year jump of 900% that was seen in the previous quarter. 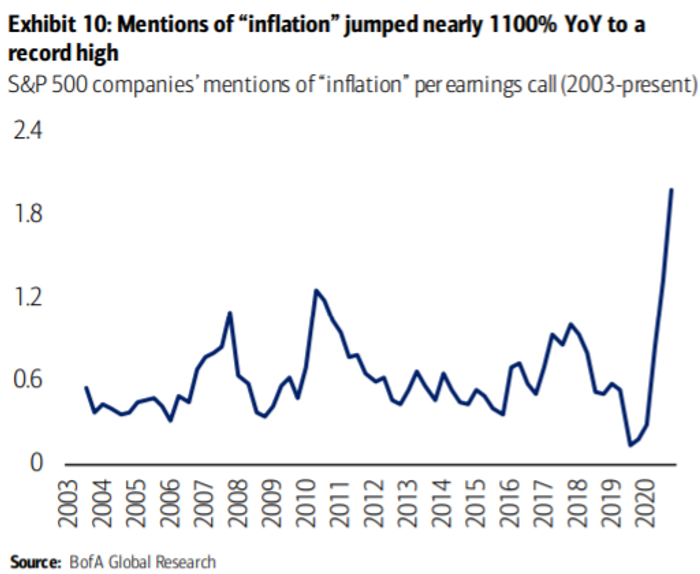 Labor inflation mentions have picked up the most among the categories tracked by BofA, while companies citing higher costs tied to supply chains also more than doubled, the report shows. 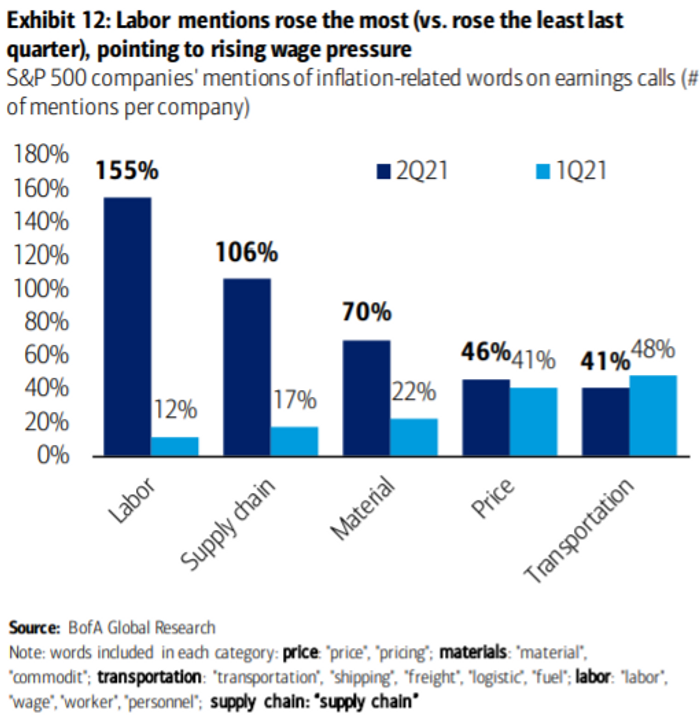 Inflation concerns, rising cases of the delta variant of the coronavirus and “mixed macro data” may be weighing on corporate sentiment, which has dipped from its recent peak, according to the strategists. They used transcripts of earnings calls to measure the sentiment of S&P 500 companies that have reported their results.

“Companies are less enthused,” the BofA strategists said. “A number of companies have highlighted accelerating inflationary pressure, with some companies expecting cost pressure to outpace pricing power in the near term.”

But corporate results for the second-quarter have been strong, with earnings per share “now tracking a 14% beat” at $51.12, topping the strategists’ estimate, according to the report. They expected EPS of $50, or an 11% beat.

The financial, communication services, and consumer discretionary sectors are leading the beat in EPS, the strategists said.

As for second-quarter sales, companies in the S&P 500 are on track for a 3% beat led by energy, according to the BofA strategists. The Energy Select Sector SPDR Fund XLE, +1.71% has soared about 30% this year based on Monday afternoon trading.

“Despite strong beats so far, earnings reactions remain muted, similar to the past three earnings seasons,” the strategists said. “Companies that beat on both sales and EPS have outperformed the S&P 500” by 50 basis points the next day, they said, which is “in line with last quarter, but well below the historical average” of about 150 basis points.

Meanwhile, the S&P 500 was up about 0.1% in Monday afternoon trading for a gain this year of about 17%, according to FactSet data, at last check. The Dow, which gauges blue-chip stocks, and the tech-heavy Nasdaq were each showing lower year-to-date gains of around 14%.