Money: A Matter Of Faith In The Issuing Government

EDITOR NOTE: You’re about to read a very smart and insightful interview on the dangers of  inflation. Not quite a primer, but close to it, the article discusses something that many people are perhaps too busy to critically penetrate: when the Fed announced that it’s willing to tolerate higher levels of inflation in order to establish a 2% “average,” what many people aren’t seeing is that inflation varies from good to good, industry to industry, person to person. Your personal inflation rate differs from mine, for example. And it depends on what you need, how much it costs, and whether or not you can afford it. While the Fed’s view of the inflation rate hovers below its desired level, the fact remains that the cost of food has been inflating, and so too has the cost of healthcare and higher education. Wait, doesn’t food and healthcare constitute our primary daily needs? If so, why’s the Fed raising those prices even higher to hit a target beyond many Americans’ threshold of affordability? That’s “real” inflation. Your inflation. And the Fed refuses to see it.

Anyone remember when our money was backed by gold? Top of the dollar bill said “Silver certificate”? Today our bills say, “Federal Reserve Note”; called fiat currency. Fiat currency is government IOU’s (political promises). The value of fiat money is based on supply, demand and faith in the issuing government.

Adam Smith said, “All money is a matter of belief.” When the world loses faith, the currency becomes worthless paper.

…. We are not tying ourselves to a particular mathematical formula that defines the average. Thus, our approach could be viewed as a flexible form of average inflation targeting.”

What could possibly go wrong?

The goal is to “average” 2% inflation, using a “flexible” formula hidden from the public. The internet is full of warnings about the possible consequences.

“…. The world’s most powerful central bank – the US Federal Reserve – ushered in a revolutionary change to its monetary policy framework…which will allow the Fed to keep borrowing rates lower for longer, and tolerate periods of what would have been unacceptably high inflation, could have profound consequences for the price of pretty much everything.” (Emphasis mine)

I contacted friend Chuck Butler. He can decode “fedspeak” better than anyone I know.

DENNIS: Chuck, once again, thank you for your time in helping us understand what is going on.

What is inflation? I was taught that the more dollars a government creates, the lower buying power of each dollar; which is reflected in higher prices for goods. As the world loses faith in the currency, they move their money into other currencies.

The Fed dropped interest rates to near zero, created trillions out of thin air, yet Powell says inflation is too low.

Why isn’t inflation through the roof already?

CHUCK: Dennis, thank you once again for allowing me to opine!

In my college economics, I had to study Adam Smith, and I agree with him wholeheartedly. Since the Fed has decided to constantly debase the dollar, I no longer call the dollar money; it’s nothing but currency…. Ok, let’s go!

1. Why isn’t it through the roof? It all depends on who you ask.

ShadowStats has it above 7% using the government formula before they started playing with it: 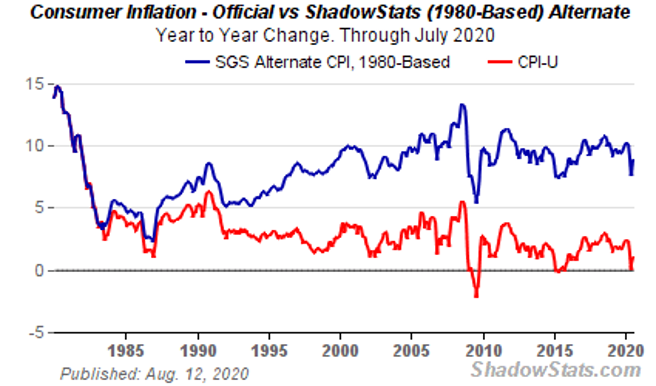 The Chapwood Index is even higher.

The government calculator in on the fritz. The US Inflation Calculator tells us inflation has averaged 1.69% since 2008 and they feel a need to spur inflation! 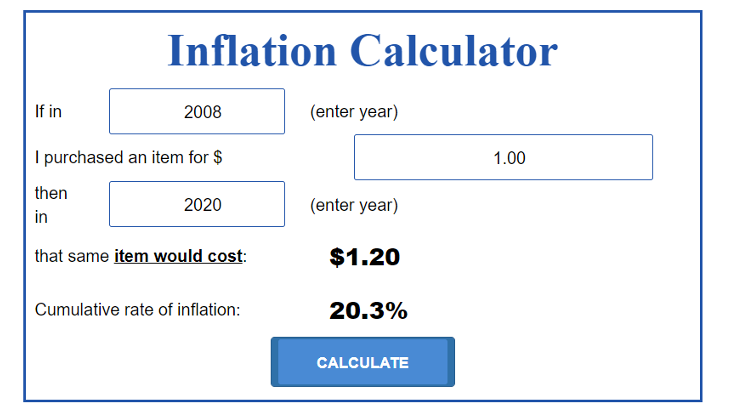 I consider inflation to be a personal thing. What I may spend oodles of currency on, you may not. If my item is going through the roof with inflated prices, then I have that inflation and you don’t! But that only goes so far, we are all affected buy food, gas and medical costs.

During the Clinton Administration, the President ordered Fed chairman Al Greenspan to find a way to bring down inflation so interest rates could be lowered; thus making housing affordable to the masses. Greenspan hired the Boston Commission, who came up with the idea of “substituting”. Historically inflation was calculated by using a fixed number of goods, putting them in a basket and checking the prices on those goods each month. Under the new calculations, if one item in the basket got too expensive, the Gov’t could just “substitute” something else, similar to that item.

And now you know why the Gov’t’s inflation calculator is on the fritz!

2. The phrase, “Helicopter Money”, associated with former Fed Chairman Big Ben Bernanke, is not a joke. The problem is all the Fed’s shenanigans, zero interest rates, bond buying, and now even ETF buying, has destroyed the “price discovery” of the markets.

This last round of currency printing went to the casino banks and the zombie Corporations; not to the mom and pops on main street. When the currency goes directly to the mom and pops, then we’ll see inflation rise, and not before…. I hear the sound of helicopters coming our way….

“There is no way the Fed pulls this off without blowing price inflation through the roof. …. They have no idea, apparently, that price inflation can get way out of control, above 5%, very rapidly and it would then require short-term rates of near 7% rather than zero, to choke off the price inflation.

But the Fed is not going to raise short-term rates to 7% anytime soon and so the price inflation could eventually advance well above 5%.”

With the Fed’s “flexible formula” could we see a huge jump in prices while the Fed tells us everything is under control?

CHUCK: Yes…Mr. Wenzel is bang on when he says, “that price inflation can get way out of control, very rapidly.” How many people remember the late 70’s, and just how quickly inflation rose to 12-13%? It didn’t take long, and once inflation was high, it took yeoman’s effort to bring it back under control… (Thank you Paul Volcker!)

I don’t like talking gloom and doom, but Central Bankers banging the gavel for higher inflation just gets me going. I can’t stop talking about all the problems that just this initiative could cause.

Gov’t debt in this country is already larger than the size of the economy! We have that weighing down the economy; we don’t need inflation on top of that!

But that’s what the Fed wants, so much so that if inflation never rises to the Fed’s target, whatever it may be, then Powell’s tombstone will say, “No Inflation did this to me.”

DENNIS: Low interest rates, coupled with the Fed hell-bent on raising inflation doesn’t bode well for the middle class. Working people hope their wages will rise with inflation, but what about those looking to retire?

“If the Fed was trying to “make up” for all inflation misses since November 2008, the Fed would need 42 years of 2.1% year-over-year core PCE inflation to average out to 2%….”

Chuck, what would you tell those in their 50’s to project for their 401k returns when they are ready to retire?

OK…One has to think that this stock market phenomenon can carry on for 20 more years, right? And when the “correction” comes, it will hurt a lot of 401k’s values….

1. Lower your debt, and if possible, get it out of your life!

2. Make certain that your investment portfolio is diversified, and I mean really diversified, using currencies and metals as different asset classes to reduce the overall risk of the portfolio.

You certainly don’t want to be heading to retirement, and have a blow up on Wall Street, right? The only way to protect yourself is to have a diversified investment portfolio. Now, you won’t be able to do your diversification all in one spot…. The Wealth Advisors aren’t going to offer currencies and metals….

DENNIS: One final question. Many will figure things out and stay ahead of the game. Some may have to downsize a bit, work a bit longer than they anticipated, but will eventually retire and enjoy life. They will know what is going on and prepare for the future without rose-colored glasses.

Do you see it the same way?

CHUCK: Yes, I do. I warn people all the time to look under the hood, and around the corner, at what the Gov’t and Fed and Treasury are telling us. As kids we had a phrase for when people that were known to stretch the truth, would speak; we would yell, “Pack of Lies, Pack of Lies”….

Word of mouth is the fastest way to get an idea going around the country. People that have diversified investment portfolios need to yell from the rooftops so other people will hear and act. That’s my hope, Dennis.

The destruction of our economy, dollar, and way of life is coming to a theater near you!

Dennis, thanks again for inviting me.

Dennis here. Money is a matter of belief in the government. I believe “The American Spirit” will rise to the challenge.

When the British Pound lost their world reserve currency status, they took a step backward, survived and many thrived. We want our readers to be in the latter group.