EDITOR NOTE: First-quarter 2021 earnings shot up as many analysts had expected. If you look at the 2022 earnings consensus, forecasts are expecting more of the same and even better. This is where Morgan Stanley differs. It feels that Q1 might have been the peak and a reset is required. And if you look at what's going on in the market, investors may be suspecting the same thing too. There are a number of things to look out for, and the article below covers a comprehensive amount of fundamental ground to be wary of. “ Investors are positioned for higher inflation...any disappointment in the next data series could unleash some pain for very crowded consensus trades.” In short, market valuations are getting way ahead of the fundamentals--into ground no longer sustainable by validation. Morgan Stanley’s recommendations? Find a safe haven. Fast.

In its mid-year outlook, published just two weeks ago, Morgan Stanley - while still sticking with an overall bullish outlook - argued that it's "often better to travel than arrive." After all, markets are discounting machines and often anticipate changing dynamics long before they become obvious. However, as the bank's chief equity strategist Michael Wilson writes today, "eventually such changes do become obvious and priced, at which point a reset is required or evidence the higher expectations are not only achievable, but beatable."

In many ways, Wilson writes, "this year represents such a period when last year's extraordinary moves in stocks are justified by the fundamentals" and his V-shaped recovery call from last year is now the consensus. Actually, no - Wilson laments that in its eagerness to catch up, the consensus is now ahead of what Morgan Stanley thinks will occur over the next 12 months: "More specifically, post Q1 earnings results, bottom-up 2022 EPS estimates are now ahead of our top forecasts for the first time since the recovery began."

To be sure, there is some fundamental justification for this euphoria: in Wilson's review of past earnings surprises, he has never witnessed such a large beat rate over a four-quarter period and/or revisions to out-year forecasts (something we predicted would happen ahead of earnings in "Q1 Earnings Will Be Stellar, But Are Fully Priced-In And Only Guidance Will Matter"). And while the results over the past year have been very much in line with Wilson's call for superior operating leverage coming out of this recession, he is "now concerned that these results have been extrapolated in a way that is too optimistic." First, over the past 4 quarters, earnings have beaten expectations by over 20%. 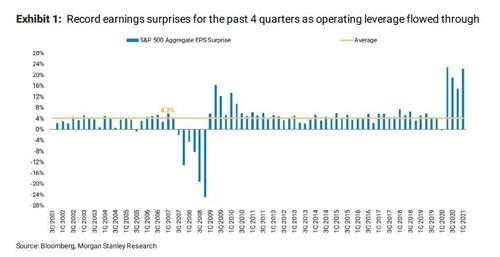 Not only is this unprecedented but it also didn't follow a period of disappointment, which usually occurs during a recession, according to MS. As a reminder, when the economy collapsed due to the lockdown, earnings estimates were slashed overnight. And while Wilson back then argued they were reduced too far and that companies would likely experience record operating leverage during the recovery due to the unprecedented government subsidy for the unemployed - "fast forward to today and that's what has happened" - the chief equity strategist is turning downright bearish.

One reason for that is Wall Street is basically extrapolating nirvana beyond the foreseeable future, with record earnings surprises resulting in record revisions. According to Wilson, "never before have we observed earnings revisions breadth this high (Exhibit 2), leaving it vulnerable to an inevitable decline." 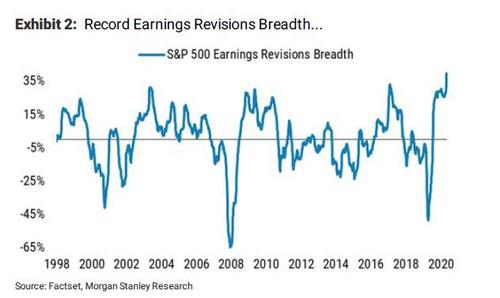 And here the infamous Wilson pessimism shines through: "The question is whether it will be a severe enough deceleration for the market to care. We think it could be given our view that NTM EPS forecasts are now too high also." The chart below shows how extended NTM EPS forecasts are relative to actual LTM results. 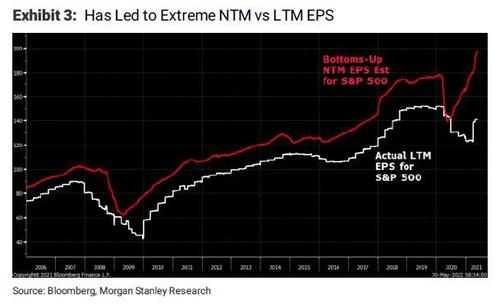 Echoing our warning on imminent margin contraction - with profit margins at all time highs just as soaring input prices hammer corporate profits - the Morgan Stanley strategist then cautions that just like his prior work forecasted record incremental margins a year ago, it is now telling us that incremental margins are topping and are likely to disappoint over the next 12 months. That view is based on two areas of concerns in particular that are unique to this cycle: 1) supply constraints/higher input costs and 2) higher corporate taxes next year.

Summarizing the story so far: earnings have been remarkable over the past several quarters, benefiting from trillions in global fiscal stimulus, and have surpassed even Morgan Stanley's previously optimistic forecasts. While this is undoubtedly a good thing, it's a "known known" at this point and no longer a surprise. Instead, in Wilson's view "consensus forecasts are now baking in what appear to be unrealistic margin assumptions given rising cost pressures and the likelihood for higher taxes next year."

There's more: in addition to peak profit margins, Wilson also believes Q1 was the peak quarter for both monetary and fiscal policy stimulus (at a time when most companies and investors are extrapolating Q1 results into the future). Exhibit A: the sharp fall in personal income suggests those concerns are warranted, as personal spending is likely to follow in the next few quarters. 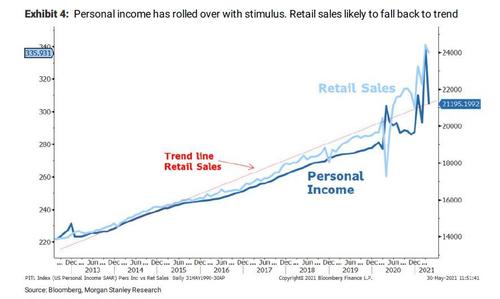 To be sure, it's not like the market is completely oblivious to all this: despite record Q1 earnings, stocks have barely budged with some of the FAAMGs lower now than in early April. As a result, this rather limited follow through to stock prices since earnings were released, suggests that the market is continuing to de-rate lower as Wilson's mid-cycle transition view dictates. Of course, given the significant earnings revisions after 1Q reporting season, the overall market price has remained flat. In other words, sliding PE multiples are being mostly offset by rising earnings forecasts.

At this point, Wilson cautions, investors must ask themselves if they think valuations will continue to de-rate lower and/or if future earnings revisions can offset it. In Wilson's own conversations with clients, most don't have a strong view on where valuations will go from here, "but the majority think valuations are fair at current levels." In contrast, the chief strategist remains convinced that "the de-rating process is not over and still has about 75% to go or an approximate 15% decline in P/Es from here."

Finally, in Wilson's view - which is rapidly emerging as the most bearish on Wall Street - "earnings revisions will not be able to offset that de-rating, leaving the overall market vulnerable to a 10-15 % correction over the next 6 months" 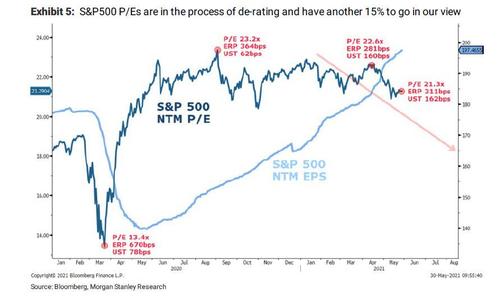 So what's an investor to do? Simple... if only on paper: According to Wilson, the key for investors will be to find stocks where earnings expectations are likely to rise more than the P/E compresses.  At the sector level, one strategy is to favor those with lower Earnings Revisions Breadth (ERB), like Consumer Staples.  Conversely, we would fade those where ERB is extreme, like Industrials.

One final point from the MS chief strategist has to do with inflation, and here too he spoils the "transitory" party. Writing that inflation is now much more the consensus view  - "in fact, it's so much the case, we are starting to think expectations may need a bit of a reset before inflation can really embed itself into expectations and force the Fed to move away from it's "transitory" view" - Wilson writes that inflation has become one of the most talked about concerns by both companies and individuals. Both corporate and consumer surveys are now laden with commentary that suggest higher costs are affecting their behavior. Both the National Purchasing Manager Survey and the Regional Fed surveys...

... suggest prices are getting out of control for many businesses. Commentary from the latest Regional Fed survey (Kansas City) indicate these concerns are becoming more difficult to manage:

Inflation expectations have also surged higher from a consumer standpoint, and according to Morgan Stanley "this is the beginning of a new trend that is more sustainable and less transitory than perhaps the Fed thinks." That said, the bank recognizes these trends can ebb and flow and would not be surprised if there is some demand destruction in the short term and overheating that leads to consumer sentiment cooling a bit in the near term.

Wilson's Bottom line: investors are positioned for higher inflation at this point in both the stock and bond markets, and as such, any disappointment in the next data series could unleash some pain for very crowded consensus trades – long commodities, TIPs, reflation winners and short dollar and interest rate sensitive assets. Of course, for stocks, this would simply be an accelerant for Morgan Stanley's bearish, or as it calls it "de-rating" call, as "higher real rates and less ability to pass on higher prices  will a bad cocktail for multiples writ large."