MSNBC Tweets High Inflation Is A "Good Thing", Then Deletes

EDITOR'S NOTE: While inflation is bad for everyone — especially for those who can least afford the higher costs of everything — some are rooting for it in order to help their agenda. In possibly related news, after the most recent consumer price data came out, MSNBC tweeted out an article about “why the inflation we’re seeing now is a good thing.” The rationale behind the article was, “Even though millions of Americans lost their jobs, enhanced unemployment benefits and stimulus payments left many of them better off, not worse. And the stock market, after initially falling, boomed.” After swift backlash and the debunking of this preposterous theory, MSNBC deleted the tweet. Unfortunately, they couldn’t delete the idea that selling the “inflation is good” narrative is a clear push to help validate the Biden administration’s massive spending plans.

While millions of Americans are suffering from runaway, galloping inflation everywhere (to avoid the dreaded "H" word that made Jack Dorsey every lib's enemy #1) from the gas pump to the grocery store aisle - which of course affects low-income individuals the most, MSNBC has gone up to bat for the Biden administration, deploying their best pretzel-logician to explain why all this inflation is literally - wait for it - good. 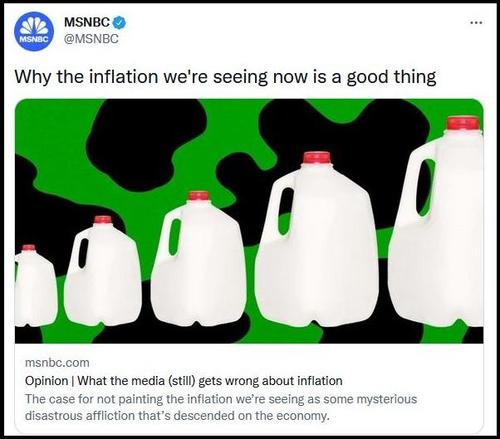 Nevermind that in September, a Kroger executive warned in that grocery prices were about to get nasty, and the company will be "passing along higher cost to the customer where it makes sense to do so." Or that Nestle CFO Francois-Xavier Roger said blistering inflation would likely continue into next year - telling the crowd at a Barclays consumer staples conference: "If we talk of 2022, it is likely that input cost inflation will be higher next year than this year."

Or that Atlanta Fed President Raphael Bostic admitted last month that inflation is not transitory (and even has a swear jar collecting dollar bills for every time some gaslighter utters the word "transitory").

Or that agricultural input costs from fertilizer to feed have gone through the roof - thanks to soaring natural gas prices of all things.

Or labor shortages throughout the supply chain - including US ports and the trucking industry - including those who refuse to take the Covid-19 vaccine.

Or just read this from Bank of America:

Nope. You see, the inflation we're seeing today is a good thing, according to MSNBC's James Surowiecki, whose financial background is a Ph.D. in American history and being a writer at The Motley Fool and The New Yorker. 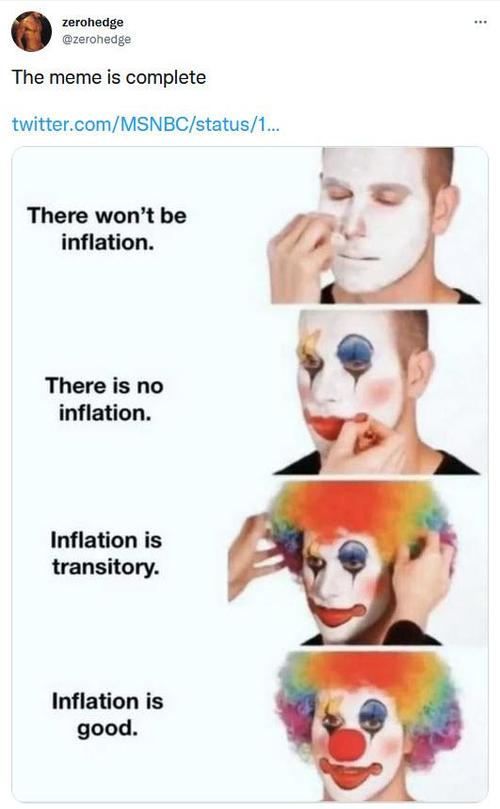 Their rationale: people spent less and saved more during the pandemic (more disposable income), and the stock market (which most American's still don't participate in) went apeshit.

Even though millions of Americans lost their jobs, enhanced unemployment benefits and stimulus payments left many of them better off, not worse. And the stock market, after initially falling, boomed.

Which of course is just propaganda, because as Morgan Stanley explained so simply even MSNBC columnists could understand, the "bottom 80%" of the population retained just a third of the $2 trillion in so-called excess savings. And without jobs, most have already burned through whatever money they had saved up. In other words, the bulk of government handouts ended up - you guessed it - in the hands of the ultra rich who never needed it!

Facts be damned, MSNBC's propaganda continued: "American consumers are, relatively speaking, flush, and it’s that strong demand for goods and services that is sending prices higher."

BUT (and totally couldn't be the primary reason, could it?), "it’s taking manufacturers and food producers time to increase supply after cutting back production during the pandemic," and as a result, "When you have high demand, and relatively low supply, prices go up."

"The inflation we’re seeing is not, then, some mysterious affliction that’s descended on the economy. It’s the predictable product of the economy’s rapid recovery, and its costs have been offset, to a large degree, by robust wage growth and government policies."

Except, when adjusted for inflation, real weekly earnings are negative. 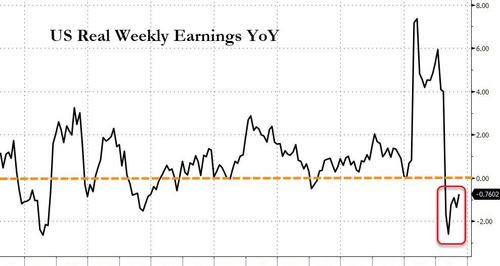 Meanwhile, even the notorious optimistic Wall Street is starting to tell the truth, with Goldman warning that things are going to get a lot worse before they get better.

Not surprisingly, after getting ratio'ed in a furious backlash, MSNBC did the only thing it could and deleted its tweet, as its latest attempt at mass gaslighting propaganda went terribly wrong.