EDITOR NOTE: A little over a year ago, 15 months to be exact, we saw the shortest bear market and the shortest recession in US history. We all knew this, as just about every financial news channel covered it; pointing it out; declaring the “emergency” to be over and the recession officially ended. Yet both the Fed and the government are printing and spending money as if the US were still in the throes of economic despair. It’s almost as if they were trying to “generate” a national emergency which, practically speaking, they’ve achieved. Government stimulus has done much to drive the current labor shortage. The Fed has actively sown the seeds for a potentially devastating period of inflation. In their attempt to control the direction of the economy with precision, they’re actively uprooting its capitalist foundations. But these efforts don’t come without some success--in transferring wealth from the poor to the well-off, in creating the conditions that justify a “free-for-all” taxation stance, in showing the economically ignorant portion of America the benefits of universal basic income, and in further solidifying their control over the economy--meaning your income, your (non-gold or non-silver) assets, your future wealth prospects, and any chance you have left of achieving financial freedom.

In case you were worried...

"The committee has determined that a trough in monthly economic activity occurred in the US economy in April 2020," says the Business Cycle Dating Committee of the National Bureau of Economic Research..

"The previous peak in economic activity occurred in February 2020. The recession lasted two months, which makes it the shortest US recession on record."

What a relief it must be to the almost 14 million Americans that remain on some form of government benefits since the widespread lockdowns of last year... 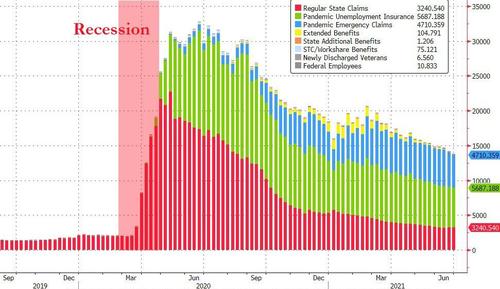 So, asking for a friend... if the recession ended 15 months ago, why are Powell and his pals still buying $120 billion in TSY/MBS every month?

Almost makes one wonder if they have an ulterior motive?

And one more tough one... if the recession ended 15 months ago, why do we need another $3.5 trillion stimulus "human infrastructure" bill?