EDITOR NOTE: Supply chain problems keep coming, and it looks like they are here to stay for the foreseeable future. Bloomberg reported that “a supply chain crunch that was meant to be temporary now looks like it will last well into next year as the surging delta variant upends factory production in Asia and disrupts shipping, posing more shocks to the world economy.” This is driving up prices on everything from lumber to cars and supercharging inflation. The temporary boost in spending from the continued government stimulus packages in the U.S. has faded, and now the true economic problems are showing their teeth. To protect themselves from this supply chain-fueled inflation, many people are turning to non-CUSIP gold and silver, which historically are great insurance policies against these sinister economic forces.

I wrote an overview of how Treasury Inflation-Protected Securities or “TIPS” work in this unusual economic environment, and published a long-form research piece on Bitcoin’s energy consumption.

This newsletter issue focuses on the ongoing supply chain issues, inflation, and commodities. In many ways, the 2020s decade continues to mirror the 1940s in terms of fiscal policy, monetary policy, and de-globalization.

Bloomberg ran a piece several days ago discussing how global supply chain problems continue to grow, leading to price inflation and delivery delays across the board. Here’s an excerpt:

A supply chain crunch that was meant to be temporary now looks like it will last well into next year as the surging delta variant upends factory production in Asia and disrupts shipping, posing more shocks to the world economy.

Manufacturers reeling from shortages of key components and higher raw material and energy costs are being forced into bidding wars to get space on vessels, pushing freight rates to records and prompting some exporters to raise prices or simply cancel shipments altogether.

The Baltic Dry Index, which measures the price of moving raw materials globally, has more than tripled recently: 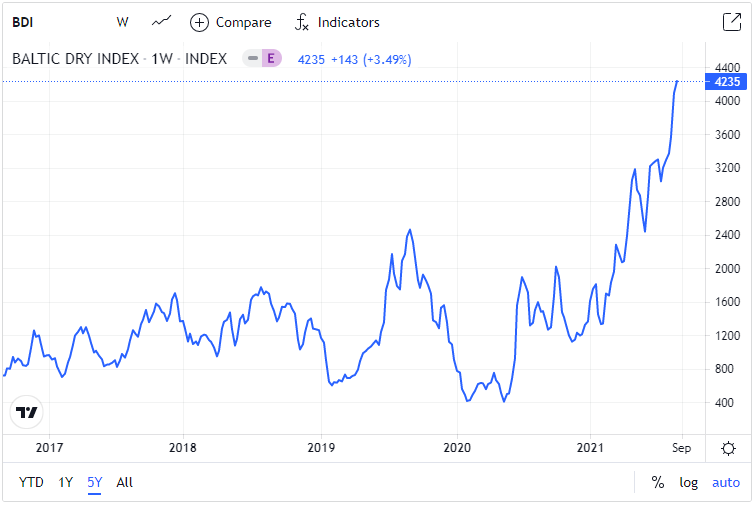 Earlier this year we had the infamous spike in lumber prices, followed by a huge spike in used car prices which was largely a result of semiconductor shortages, and this semiconductor problem remains ongoing to some extent. Toyota, the largest vehicle manufacturer in the world, is cutting production by 40% in September due to semiconductor shortages. Many manufactured goods are very complex, and draw upon supply chains around the world. Just a handful of missing parts out of a thousand can delay a finished product.

But it’s not just manufactured goods. Food and gasoline prices are elevated, house prices have surged, and rents are starting to shift upwards to catch up with housing prices: 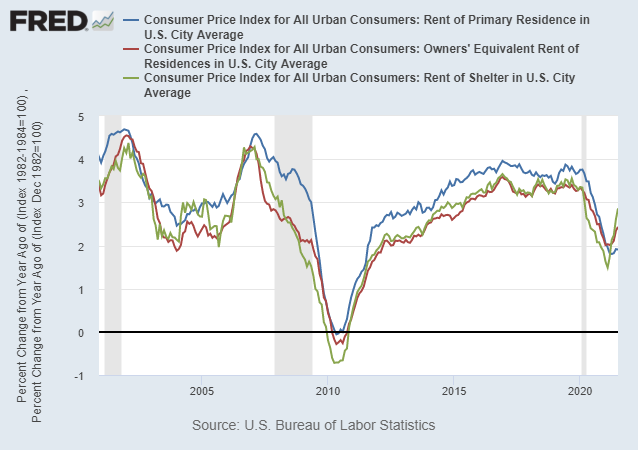 Many people are debating to what extent the recent widespread price inflation is the result of supply-chain problems associated with COVID-19 lockdowns, changes in consumer behavior, and broad money supply growth.

That third variable is controversial because it’s political; neither fiscal authorities nor monetary authorities in any country want to take any part of the blame for inflation, so they point heavily towards supply chain issues as being the sole cause of the inflation. Back in the 1970s, they kept saying it was transitory as well, due to one-time factors.

However, it’s important to keep in mind that every major inflationary period is associated with shortages. That’s what inflation is. Price inflation occurs when the money supply goes up a lot more quickly than the supply of products and services. And specifically which products and services get price-constrained depends on where our weaknesses are, meaning where we lack abundance.

The inflationary 1940s decade had major commodity and labor shortages, which also pushed up the prices of most other things. It happened at a time when countries were monetizing massive government deficits to fight a global war, which radically increased the supply of money in the system. Interest rates were held near zero by central banks while inflation soared. Most countries had suspended their gold standards or devalued their currencies relative to gold starting with World War I, through the Great Depression, and into World War II.

The inflationary 1970s decade had major oil shortages, which pushed up the prices of everything else. US domestic oil production peaked and we became increasingly reliant on oil imports, at a time when for geopolitical reasons related to the Yom Kippur War, some of those exporters didn’t want to sell to the US. Importantly, it also happened shortly after the US defaulted on the gold standard and increased its money supply rapidly (as did other countries, who had until that time pegged their currencies to the dollar, which was supposed to be “as good as gold” but was now unbacked and devaluing). Apart from the war, why would oil exporters want to be paid with unbacked pieces of foreign paper, which the dollar had just recently become? It took some convincing, to say the least. Like the Godfather, we offered them some protection, and the petrodollar system was created.

The so-far inflationary 2020s decade has major supply chain shortages, which are pushing up prices across the board as well. And, like the 1940s and 1970s, it is happening at a time when governments are running large monetized deficits, and thus increasing their money supply faster than normal. Interest rates are once again below the prevailing inflation rate, meaning savers are not being compensated for their devaluing money.

This chart shows 5-year cumulative broad money supply growth per capita, and consumer price inflation, for the United States over the past century and a half: 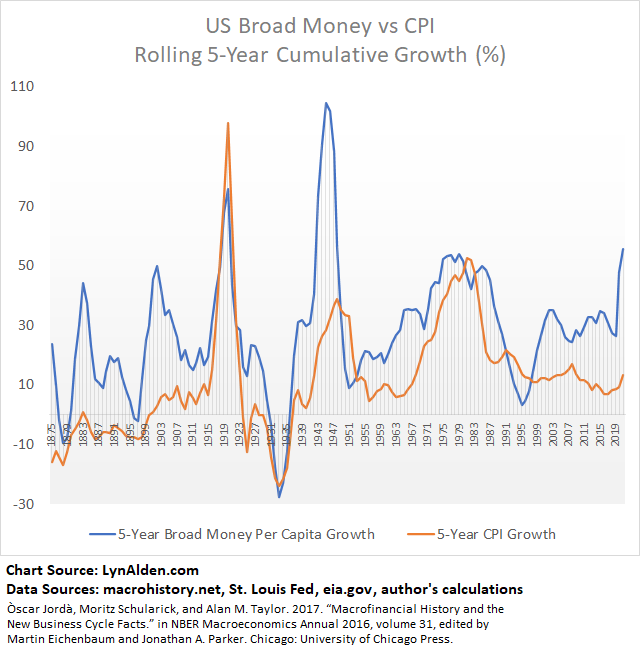 How much inflation we have going forward will depend on the growth of the money supply and how quickly we are able to use our resources to address our supply chain problems.

If the current inflation was purely based on supply chain issues, which are causing issues globally, then we should see similar rates of inflation across the developed world. But we don’t see that. The United States has noticeably higher inflation than our various developed peers. Here’s the US vs the UK vs Japan for example: 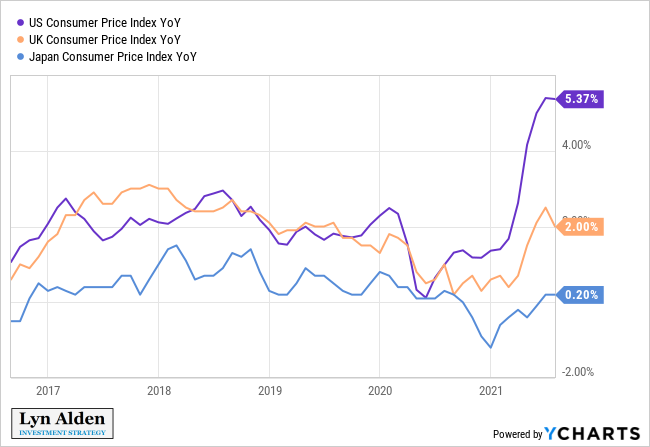 Unlike the US, the UK hasn’t rapidly expanded its money supply lately: 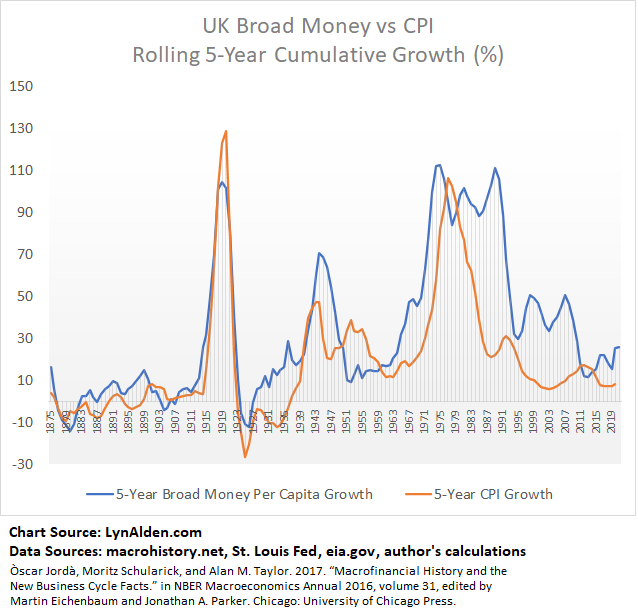 And Japan had the slowest money supply growth rate in the world in recent years: 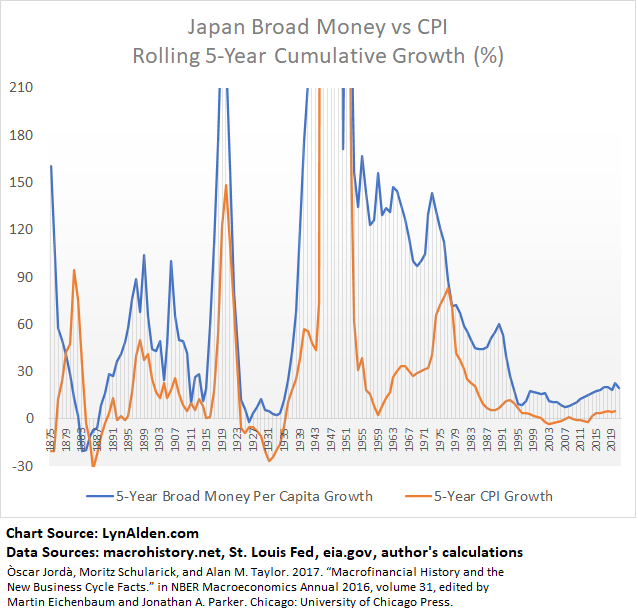 Large fiscal stimulus in the United States, monetized by the Federal Reserve, helped boost demand for goods and services in the US but can’t fix supply shortages, and so our nominal GDP bounced back faster than our peers, along with higher price inflation. People can debate about the various trade-offs for how much fiscal support is useful, what format that fiscal support is best used in, etc. But it does come with costs, in addition to its benefits.

This is a theme I’ve been focusing on for a while. Many countries, especially the US, are backed into a corner due to high levels of debt and basically have to do fiscal stimulus while holding interest rates low, and it is real assets (stocks, real estate, commodities, etc) that benefit from that outcome.

We should also take a step back and look at global supply chains from a high level view.

For the past few centuries, as communication and shipping systems improved, the world became more interconnected. Global trade as a percentage of global GDP grew over time.

This was mostly a good thing because it allowed for more efficient use of labor, specialization, resources, and information. An oil-rich nation could trade with an oil-poor nation that focuses on manufacturing, for example. A country with abundant food resources could trade with a country that specializes in financial services, software, or medical products.

However, the world has gone through occasional periods of de-globalization as well. This chart shows global trade as a percentage of GDP from 1870 through 2017: 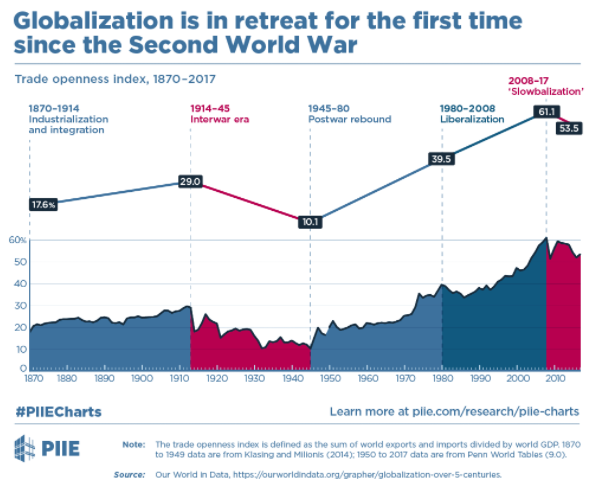 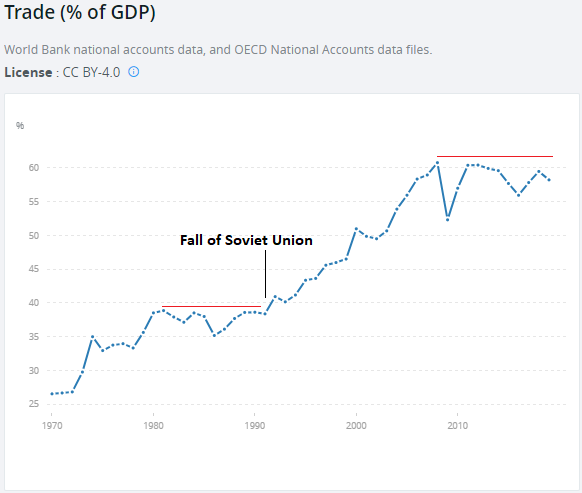 Globalization briefly stalled after 1980. Fed Chairman Volker had sharply raised interest rates to save the dollar from 1970s inflation, and parts of Latin America suffered financial crises in part because their dollar-denominated debts suddenly surged in value against their local currencies.

China’s economy began opening up to the world in the 1980s under Deng Xiaoping, and the Soviet Union dissolved in 1991, opening eastern Europe and central Asia to the rest of the world as well. From there, along with US trade policies that made use of these new markets, we had a renewed period of globalization, this time with the benefit of information technology. This trade growth peaked in 2008 at the start of the global financial crisis, and since then has gone sideways.

When we look at the chart of US money supply vs inflation again, we can see two big periods of weaker correlation (unlike, say, the UK where it remained far more correlated): 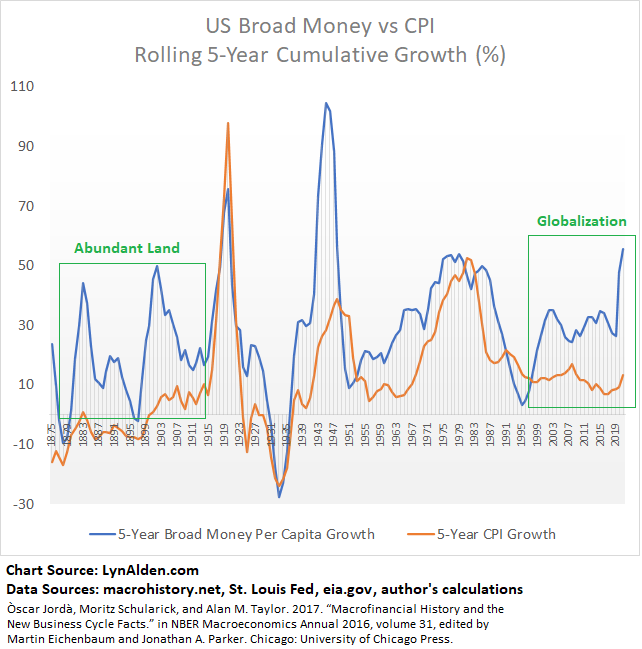 The 1870s-1900s decoupling in the US was characterized by major abundance of land and resources, unlike the UK and elsewhere. American settlers moved across the unsettled continent (often killing and displacing indigenous populations), meaning that land and resources were cheap and abundant. Immigrants flocked to the broadening country as well, providing abundant cheap labor. China, which before then had been one of the world’s biggest economies, was brought to its knees by the Opium War due in large part to aggression from European powers, and many Chinese immigrants came to the US to work, accepting low wages. The American economy went from underbanked to fully-banked. Major oil discoveries were made, the internal combustion engine was invented, and electricity was invented.

The 1990s-2020 decoupling in the US were characterized by similar advancements in information technology and global openness that dramatically improved corporations’ ability to arbitrage labor. They could hire workers in Mexico or China for pennies on the dollar compared to what they would need to pay Americans to do similar work. The United States, with the global reserve currency, hollowed out its industrial base at a far faster pace than our peers, as we shut down domestic factories and opened them up abroad.

Starting in the 1970s and continuing through today, US labor productivity and US wages decoupled: 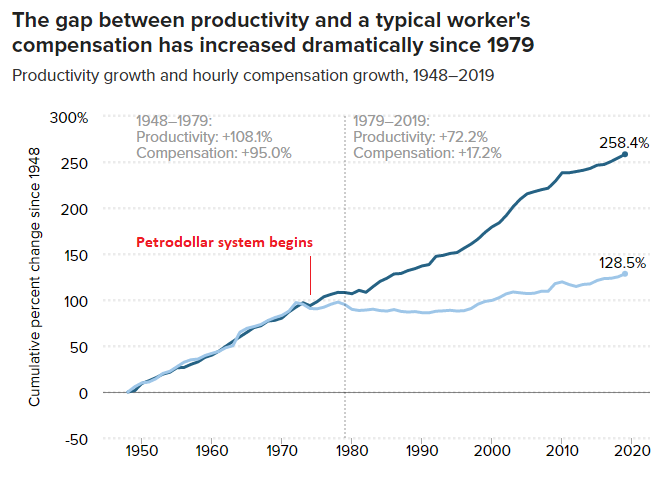 The US began running structural trade deficits with the rest of the world (unlike Japan and Germany and many other peers): 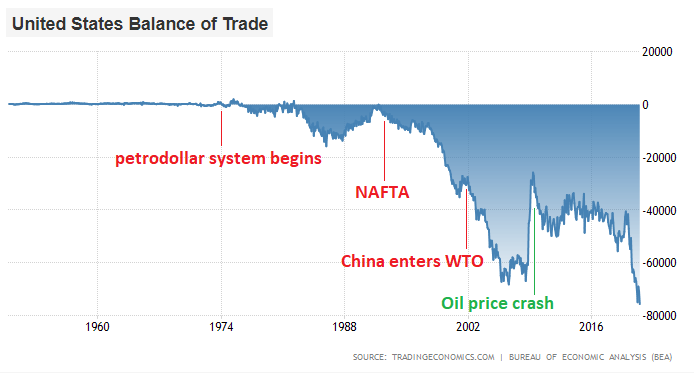 Specifically, the US is a net exporter of services, but a huge importer of goods. When you combine services and goods together we have a net trade deficit, but it’s in the goods area that we are really weak: 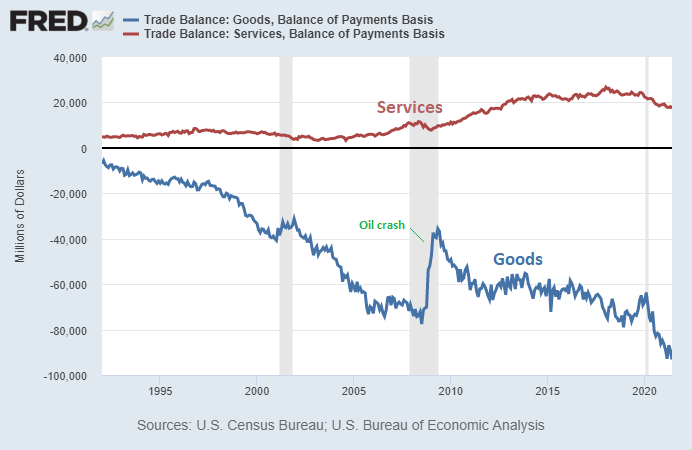 This is important, because starting from the initial March 2020 lockdowns and fiscal stimulus, the US and many other places had an explosive difference in goods consumption vs services consumption: