Next 10 Years Will See 15% Decline in Bank Teller Jobs

EDITOR NOTE: Ten years from now, there will be a mass exodus of humanity from the banking and financial services industry. Literally and figuratively. As digitization outpaces human performance in productivity and efficiency, as consumers prefer the personalized features of apps to the personal touch of a branch clerk or manager, it’s becoming clearer and clearer that what the industry needs, according to a Wells Fargo analyst, is “more computers and less people.” We like to think that the technologies we create and manage are in service to humanity’s needs. There’s subtle yet perverse reciprocity in that equation. These technologies are also “domesticating” us to think more like machines in a digital world and less like humans. As central banks get closer to developing and implementing digital currencies on a global scale, what’s going to be lost in the mix is the notion of financial freedom, privacy, and choice--the attributes that help make us feel more “human.” In other words, humanity itself will be reduced in the digital mix. Financial control will be in the hands of a centralized government-bank hybrid and individuals will be reduced to digitized “cogs.” The only way out of this dystopian scenario, of course, is to find shelter from digitization--one that retains a monetary value far greater than the digital monetary system itself: physical gold and silver.

Wells Fargo analyst Mike Mayo sees a major change coming in the world of U.S. banks. In fact, he predicts that they could wind up doing away with 200,000 jobs, or 10% of the industry's total employee count, over the next decade.

The shift would come as a result of looking to increase profitability in an age of automation and changing customer behavior. “This will be the biggest reduction in US bank headcount in history,” Mayo told the Financial Times.

The jobs most at risk are in-person branch jobs and call centers; as if it wasn't already difficult enough to get any banking done in person or over the phone with an actual human being.

Mayo's analysis gels with Department of Labor predictions, which are calling for a 15% decline in bank teller jobs over the next decade. In addition to technological advancements, non-bank lenders entering the market have also put pressure on banks, Mayo said.

Names like PayPal and Amazon entering financial services are some of the concerns of high profile banking executives, like J.P. Morgan's Jamie Dimon, who mentioned it in his annual letter to shareholders last month.

“Digitisation accelerated and that played to the strength of some fintech and other tech providers,” Mayo says in his note. “We believe that banks are likely to see headcount reductions accelerate as the economy reopens and conditions normalize. Long-term, improving efficiency is less luxury than necessity.”

“Banks must become more productive to remain relevant. And that means more computers and less people,” he continued. He predicts that backlash will be limited as most of the cuts can occur as a result of attrition, and not layoffs, over the next 10 years.

He concluded: “If I was giving advice to my kids, I’d say you probably don’t want to go into the financial industry. It’s likely to be a shrinking industry.”

The U.S. banking sector has seen jobs remain roughly flat at about 2 million for the last decade, FT reported. 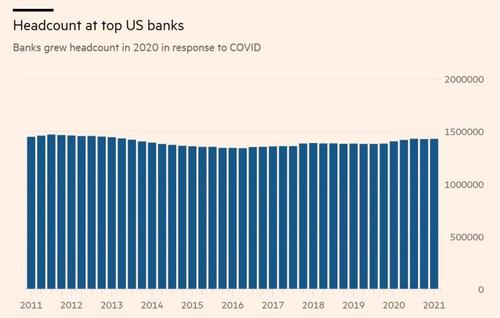