EDITOR'S NOTE: The nickel market saw a perfect storm brewing on March 8. As the fighting between Russia and Ukraine intensified, fears of a nickel supply shortage triggered a massive buying spree. The price jump, over $100,000 per tonne, was so remarkable that the London Metal Exchange had to halt trading. It turns out that the world’s largest nickel producer, Tsingshan Holding Company, was caught in a short squeeze. If the producer was simply hedging the price of nickel in anticipation of its 850,000-tonne delivery, then it should have been immune to the surge. After all, their goal, we assume, was to lock in the price of nickel, making it immune to price fluctuations. The problem, however, is that LME nickel contracts are for “Class 1” metals. Class 1 nickel is used for EVs, alloys, electroplating, and other applications that require “high-grade” metal. Tsingshan, in contrast, produces “low-grade” nickel, aka nickel pig iron (NPI), most of which goes toward manufacturing low-cost stainless steel. So, when Tsingshan found itself on the wrong side of the market, it couldn’t simply deliver its low-grade nickel for contracts representing higher grade products. Nickel trading resumed at the LME. And once again, its futures contracts are surging, locked limit-up. 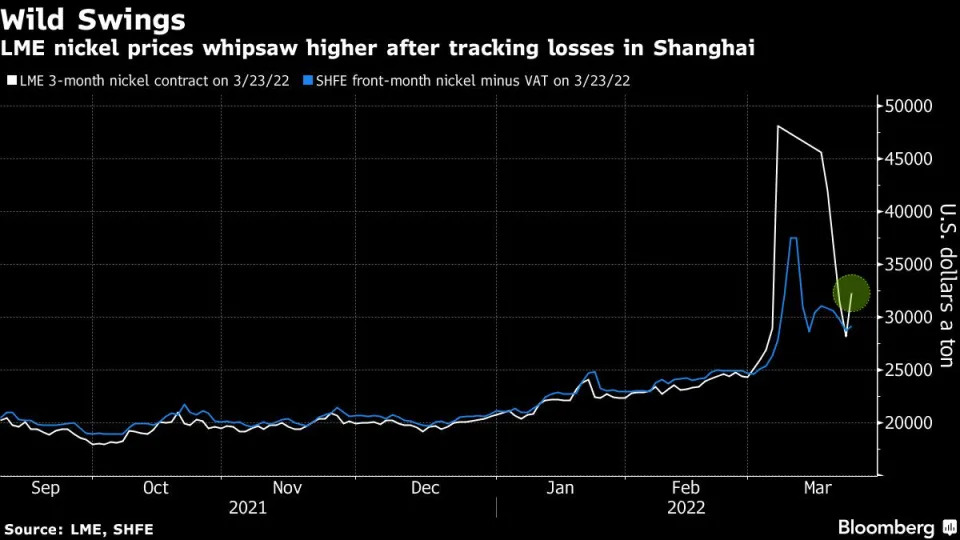 (Bloomberg) -- Nickel surged by the 15% daily limit on the London Metal Exchange, adding to a string of sharp price moves as the market attempts to reset following a massive short squeeze.

Nickel futures were locked limit-up at $32,380 a ton by early afternoon in London, in the first day of gains since the market reopened on March 16 with new price restrictions aimed at preventing a repeat of this month’s chaos. Prices plunged by the limits with very little volume in the first four days of trading, before reaching a level on Tuesday where buyers finally returned to the market.

Futures in Shanghai also jumped when trading resumed for the evening session, and rose as much as 17% to the exchange limit.

Wednesday’s surge extends a period of unprecedented turmoil in the nickel market, after LME prices soared 250% over two trading sessions in early March, touching a record $101,365 a ton during a short squeeze focused on China’s Tsingshan Holding Group Co. The exchange intervened to suspend trading for a week and cancel billions of dollars of trades. The market plunged when it reopened, and is now down about 70% from the record high, but up more than 30% from the start of the month.

Other base metals also jumped on the LME, with zinc surging as much as 7.3% to the highest since March 9, while aluminum gained as much as 6.2%. Trading is becoming increasingly illiquid on the LME, with many investors looking to liquidate their positions in the wake of the metal’s unprecedented volatility.

Today’s limit-up move in nickel also means that the LME once again failed to set its “official” price -- a key benchmark that is established at lunchtime. The industrial metals industry relies on LME prices as gauges for physical transactions, while financial investors in products like commodity indexes use the exchange’s prices to value their positions. The LME published an official price on Tuesday for the first time since March 7, the day before trading was suspended.

Trading started slowly in London on Wednesday, before gaining pace as prices spiked toward the limit. While Tsingshan has struck a deal with its banks to avoid further margin calls, there are still a large number of bearish bets in the market that need to be unwound -- and at a time when fears over supply are growing.