EDITOR'S NOTE: On this last day of 2021, it’s fitting that author Charles Hugh Smith writes about the fact that “every asset bubble has a last chance to get out before the crash.” Smith admits that the last chance can be difficult to identify. It has to, or everyone would see it and take the exit ramp. He does identify several signs to look for. These include a breakout of new highs followed by a dip, and people, once again, being encouraged to “buy the dip.” On the technical side, Smith says there are “traditional signs of a top such as double tops and head and shoulders are mooted by the advance.” After all this, when the rally everyone believes in falters, the crash comes, and those who haven’t gotten out are in trouble. Smith sums up with an ominous observation, writing, “The interesting feature of last chance to get out is nobody sees it until after the crash has done its damage. Only when it's too late does it become painfully obvious.”

The interesting feature of the 'last chance to get out' is nobody sees it until after the crash has done its damage.

Every asset bubble has a last chance to get out before the crash point that becomes obvious in the aftermath. But at the time, this last opportunity to exit before the wipeout is difficult to identify for a number of reasons.

One is the general mood at the top of bubbles is extreme confidence that there are further gains just ahead. Everyone who attempted to identify the top of the rally has been proven wrong, and everyone who shorted the rally (i.e. bet on a decline) has been wiped out.

The most anyone is willing to say publicly is that risk is elevated, some day there will be a reckoning, etc., all of which is boilerplate everyone has heard for months or even years.

The last chance to sell doesn't give itself away; technically it's at best ambiguous as all the conventional topping signals tend to be muddied, enabling Bulls to declare the top is far from in and bearish signals have been nullified.

The classic last chance follows an apparent breakout to new highs that exceeds previous resistance. In retrospect, the breakout proves to be false, but at the time it's clear to Bulls that this is yet another breakout and therefore a reliable signal for more gains ahead.

Everyone who sold on downlegs is anxious to get back in and so every dip is reversed by buy the dip buyers who have been handsomely rewarded for buying previous dips.

Technically, traditional signs of a top such as double tops and head and shoulders are mooted by the advance. The rally exceeds whatever levels were considered bearish triggers and so the consensus that further advances are essentially guaranteed finds sufficient technical support for even skittish traders to continue to be all-in the market.

The first decline off the last chance to exit is bought, but the rally falters. The buy-the-dippers dismiss this as an anomaly and buy this second dip. That too falters and once the third buy-the-dip has failed to rally back to previous highs, many buy-the-dippers have been wiped out and the momentum of buying slackens.

When it's clear buy-the-dip has failed, the selling becomes a self-reinforcing avalanche and the market crashes.

None of this is visible until it's too late to exit with profits in hand. By the time the banquet of consequences has been cleared, the majority of the believers in the inevitability of more gains just ahead have been wiped out by the crash that they reckoned was impossible.

Is this the last chance to get out before the crash? Bulls are confident for reasons that have worked astoundingly well ("It's all about flows, nothing else matters," "because the Fed," etc.) and Bears have been reduced to mumbling about elevated risk.

The interesting feature of last chance to get out is nobody sees it until after the crash has done its damage. Only when it's too late does it become painfully obvious. 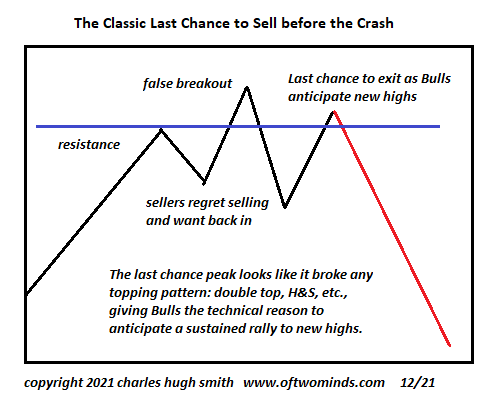 Originally posted on Of Two Minds.