Non-Transitory Inflation: We Will Be Forced to Face It

EDITOR NOTE: Two positions at stake, and two compelling arguments explaining the current inflationary environment. At the crux of it all is the side of the fence for "non-transitory" or “transitory.” Will economic growth coming out of the pandemic translate to rising prices, considering the “drag” from businesses that went belly up, exerting negative pressure on prices? Or will that not matter, based on the principle that inflation in the money supply necessarily seeds the outcome of higher prices in the future? Both experts--one bear and one bull--aim to predict the outcomes unfolding in the near term. Our position, as gold and silver investors, is not to predict but to prepare--to manage risk and to position our portfolios either for explosive growth, should inflation spike, or sound capital preservation, should inflation remain moderate. Either way, the time window to purchase non-CUSIP gold and silver is closing, as the market plays out the clash between sentiment and sobriety, pushing both metals higher on monetary and (in the case of silver) industrial demand.

We are about to see “non-transitory inflation,” according to Bianco. His words were chosen carefully to oppose Fed Chair Jay Powell’s statement on April 28 that the U.S. would face only “transitory” inflation.

Bianco is president and macro strategist at his own firm, Bianco Research, L.L.C., which is based in Chicago. He spoke on a panel with Lacy Hunt on May 7 at this year’s Strategic Investment Conference, hosted by John Mauldin.

“We are going to see inflation,” Bianco said.

Inflation will bring higher interest rates. Bianco said he was a bond bull for a long time, but that changed on March 9 of last year, when the yield on the 10-year Treasury bond bottomed at 32 basis points.

The biggest driver of inflation is the $4 trillion deficit, which Bianco said does not include the spending bills that were just passed or infrastructure bills that are pending. That is 19% of GDP, a level that was surpassed only in 1943-1945, when it was 20%, only to fall to 7% in 1946 in the aftermath of World War II.

That deficit is not going to disappear, Bianco said.

Bianco is alarmed by the percentage of personal income that is made up by government transfer payments – he called this “mailed money” – consisting of stimulus and other federal subsidies. It was approximately 33% over the last year. That third of Americans’ income that came from the government has been mostly invested. The savings rate rose from 2% in 2005 to 27%.

Consumers have a “pocket stuffed full of money,” he said.

Some of it went into stock market and some went into the real economy and has shown up in the money supply, Bianco said. That means more money will be chasing a dwindling supply of goods, the classic formula for inflation.

The shortage of goods is showing up as problems in the supply chain, he said, and prices will go higher to bring it into balance. The alternative is for manufacturers to ration products, which he said has happened. Delivery times have slowed and are now at a 70-year high. Container rates are surging, particularly from Asia.

“We are running the supply chain flat out, but the demand is outstripping the supply,” Bianco said. “The fix is to raise the prices.”

“In the wake of the pandemic and government subsidies,” he said, “people are buying stuff like crazy and the supply chain cannot keep up.”

Companies are willing to pay higher prices, and this is showing up in commodity prices, like copper, which is soaring “like bitcoin,” he said. Lumber prices are up so much that home builders say it is adding $38,000 to the average cost of building a home. 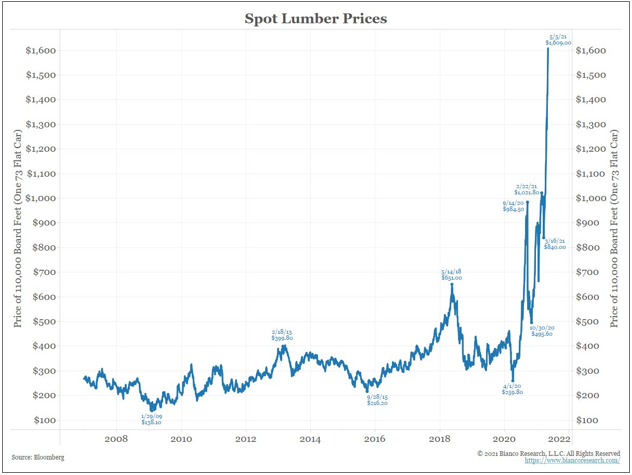 The Bloomberg economists’ forecast for inflation is 2.6%, which is consistent with the consumer Conference Board survey. Gas prices are not soaring, though, Bianco said, but inflation shows up everywhere else. 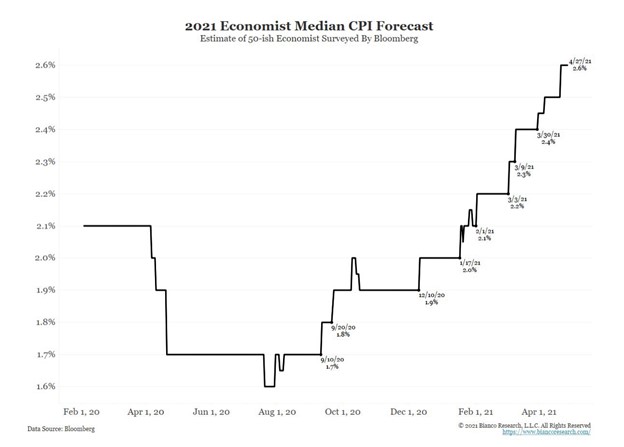 Data from the Bank of America shows that mentions of the word “inflation” on earnings calls went up 800% this year. The bank called it “transitory hyperinflation,” but Bianco said it just means inflation will go up a lot.

The Fed uses the phrase “anchored inflation,” according to Bianco. That means that if companies raise prices, they lose market share. But inflation has become unanchored, giving companies the flexibility to raise prices. This is not easy to fix, such as by raising rates. Once the base effect of supply chain shortages passes, he said, companies will be comfortable raising prices on a steady basis.

Lacy Hunt and the case against inflation

Inflation will decelerate, according to Hunt, based on fiscal and monetary issues.

Last year, real GDP had its worst decline since World War II; this year it will grow at the fastest rate since the late 1950s. In such early-stage expansions, Hunt said, the relationship between GDP and inflation doesn’t hold, meaning that economic growth doesn’t translate to rising prices. There is too much drag from companies that went out of business, he said, holding back price increases.

Inflation is a lagging indicator, and typically shows up 15 quarters after the low point of a recession. This is because a recovery would be truncated by rapid inflation, according to Hunt, due to higher interest rates and a growing trade deficit. After deep recessions, productivity rebounds sharply – historically approximately 5% annually. It will do better this time because of technological advances, like Zoom. This productivity increase will offset increases in wages and prices.

The supply-side disruptions from the pandemic caused domestic producers to gain share. But now, lower-cost Asian producers will regain their market share, Hunt said, and there will be a significant price war.

The world suffers from a massive debt overhang, a theme that Hunt has written and spoken about extensively. The U.S., Europe and Japan have all accelerated their debt burden since the start of the pandemic. More debt has led to weaker economic performance because it increases the government’s share of economic activity, he said, and economies become less productive.

When debt bubbles, such as the U.S. faces, burst, it has typically been followed by deflation, Hunt said

Debt-financed operations typically stimulate government for a quarter or two and quickly fade off. The increase in demand from that stimulus is not sustainable, Hunt said. In technical terms, there is no “Keynesian multiplier” from debt.

The policies we are pursuing today are destructive to economic growth, Hunt said. We are heading to a Japan-like lost decade of growth.

The core of the disagreement

The sharp divide over inflation between Bianco, Hunt and Rosenberg can be traced to the question of whether the effects from government stimulus payments will be transitory or permanent. Bianco says they are permanent; consumers have enough money and there is enough pent-up demand to drive prices up, and corporations will have the power to sustain price increases.

Hunt and Rosenberg disagree and argue that the money from stimulus payments will be used to pay down debt or will be saved by consumers. Consumer demand will return to pre-pandemic levels. The supply shortages we now see will self-correct, and companies will not have the power to raise prices at a sustained pace.

All agree that the growing fiscal deficit is problematic. Bianco says it will be inflationary, although he was not clear about the transmission mechanism that will cause increases in consumer prices. Hunt and Rosenberg believe that higher deficits will be deflationary, as they have been in Japan.

The structural forces behind the “great moderation” and the period of low inflation that has persisted since the 1980s are still in place. Globalization has reduced the cost of manufactured goods. The dollar is the reserve currency, and a strong dollar is deflationary. And many Americans at the lower end of the wealth spectrum, despite government subsidies, still have a negative net worth, which again is deflationary.