Now What? US Stocks Third Largest Jump In 100 Years

EDITOR NOTE: The 76% rise in global and US stocks since last year’s March low is the third-largest market surge in a century. Everything that can possibly boost the market is active in the mix--stock-buying mania, corporate buybacks, accommodative monetary policy, and, specific to our circumstances, a towering medical achievement in the rapid production of vaccines to counter the pandemic. But along with this V-shaped recovery in the “financial economy” (note the difference between the economy of production versus paper) comes a V-shaped recovery in inflation. Bottom line: Bank of America sees the peak in policy and optimism as early as Q2 of this year. Q2 begins now, from April to June. Will this be the market’s downturn to match the lows of the “real economy”?

For his weekly Flow Show report, BofA's Michael Hartnett picked a remarkable front cover chart, one showing that the 76% jump in US stocks from Mar’20 lows is now the 3rd largest YoY move in the past 100 years. 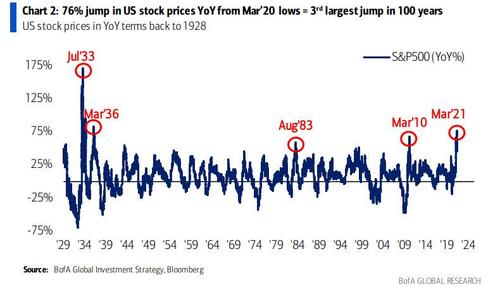 Among the factors making this possible was the return of the record stock market mania, which in the last week manifested itself in another round of huge inflows into stocks ($25.6bn) bonds, ($17.9bn), all funded by an even bigger ($47.3bn) outflow from of cash, the largest in 4 months. Among the "flows to know" according to Hartnett, there were strong inflows to IG bonds ($9.8bn) & EM equities ($5.1bn), plus tech inflows resume ($1.6bn); inflow to global stocks past 5 months ($602bn) exceeds inflow in prior 12 years ($452bn)…note US corporate buybacks ($6.3tn over past 12 years). 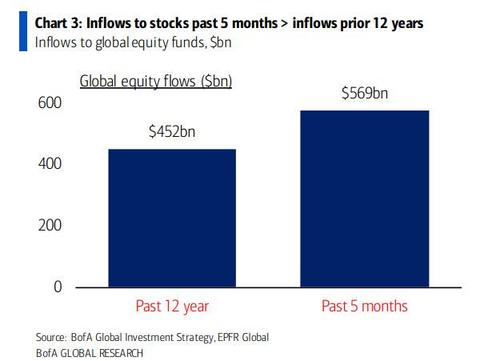 Hartnett then notes another historic milestone: so far there have been 833 million global COVID-19 vaccines administered since 1st vaccination in UK on Dec 8th, and at this rate global vaccinations are on pace to exceed 1 billion jabs in 6 days, on April 23rd, "a staggering global human achievement," but one that hardens BofA's view that Q2’21 will see peak in policy & profit optimism. 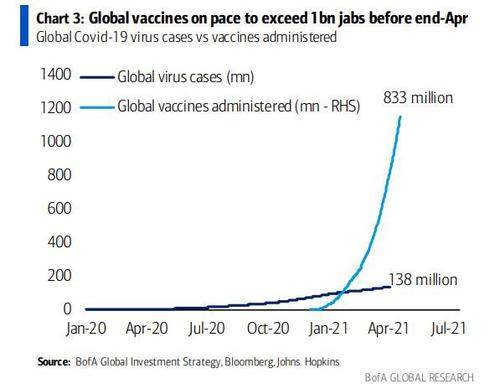 As a reminder, earlier this week BofA quant and chief equity strategist Savita Subramanian explained her reasons why she expects the S&P500 to drop 10% and close the year at 3,800 making BofA tied for the most pessimistic banks on Wall Street).

Looking ahead, Hartnett says that after the remarkable rebound in everyghing in the past year, "there is only one more V to go": V-shape in stock prices, housing, PMIs, EPS, GDP now being followed by V-shape in inflation, just look at lumber prices... 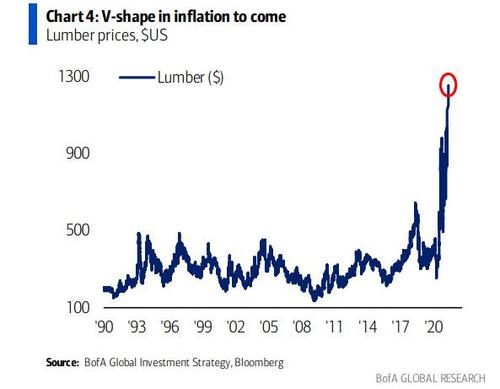 .... tighter labor market (almost half of all small businesses are unable to fund workers, as we discussed yesterday); 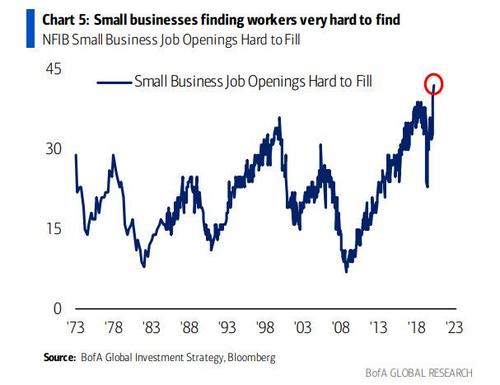 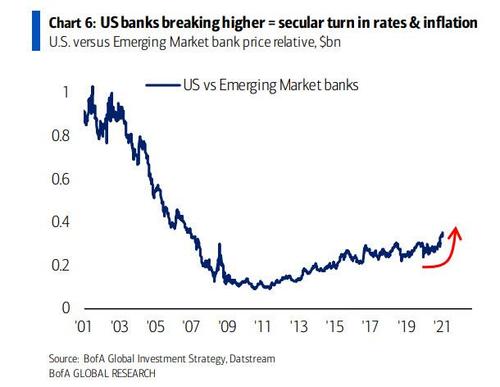 Finally, with regard to what happens next, going back to Hartnett's key observation this has not only been the third fastest annual surge in stocks in history... 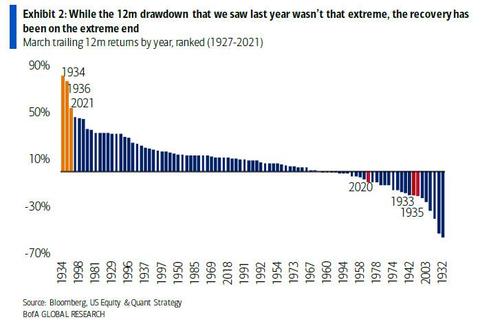 ... but also a 2.3-sigma move above average. Such outsized moves have unhappy endings: as BofA's Savita Subramanian calculated "two+ standard deviation moves have only happened four other times since 1928, with losses occurring over the next 12 months in three of the four cases, and the average 12 month return of -4%.

In other words, as BofA concludes, the current moves implies a projected 12-month price return of -4%, all else equal... although it isn't because never in the history of humanity has the market been injected with so much central bank liquidity as it is now.