EDITOR'S NOTE: According to Zero Hedge, there are currently more open jobs than there are unemployed Americans in the country. The Bureau of Labor Statistics shows that, even after two straight months of decline, there is still a near-record 10.438 million job openings in the country, while the number of unemployed people is at 7.4 million. The sectors with the biggest gains in job openings in October include health care and social assistance, state and local government, excluding education, wholesale trade, and information. A lot of this is being fueled by the number of people quitting their jobs continuing to rise. In October, the sectors with the most job quits include arts, entertainment, and recreation, other services, and state and local government education.

After seven consecutive months of massive increases in job openings (where even the weakest month saw a 290K increase and the strongest, July, saw a record 913K new jobs openings), today the BLS reported that in September the number of job openings in the US may have finally reached a peak, dropping for the second time in a row, by a modest 191K in September (recall the JOLTS report has an extra month delay vs the payrolls report), after August's 469K drop. Still, even with the big drop, the total number of job openings remains a huge 10.438 million, which came in well above the 10.3 million expected, and just shy of the 11.1 million all time high. 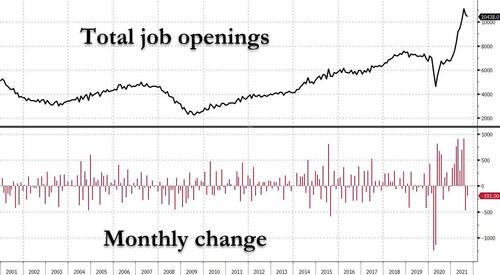 The second consecutive decline in job openings took place in the month when millions of Americans lost their emergency pandemic benefits, and while we have yet to see a big surge in payrolls as a result of millions of unemployed workers collecting benefits returning to the workforce, we expect continued declines in job openings in the coming months as more and more vacant jobs are filled. But not just yet. 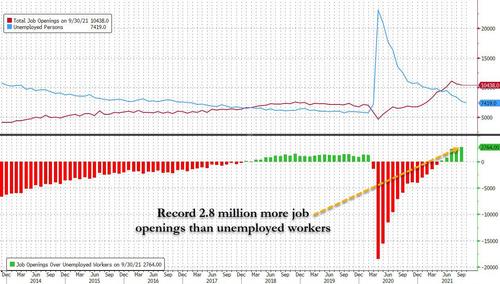 Obviously, with far more job openings than unemployed workers, this meant that in August there were again less than 1 unemployed workers (0.7352 to be exact) for every job opening, up from 0.7841 in July, and down from a record 4.6 at the peak crisis moment last April. 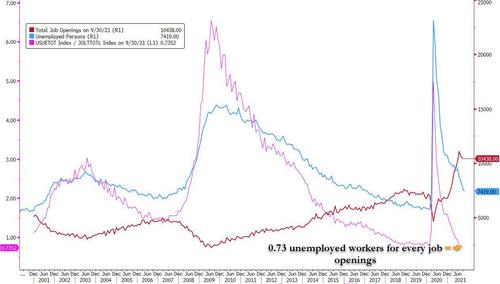 Furthermore, in September in addition to a decline in job openings, we also saw a modest slowdown in hiring: according to the BLS, hiring dropped by 38K to 6.459 million following last month's sharp decline in hiring of 264K, as decreased in state and local government education (-92,000) and educational services (-89,000) while increasing in health care and social assistance (+109,000) and finance and insurance (+60,000). 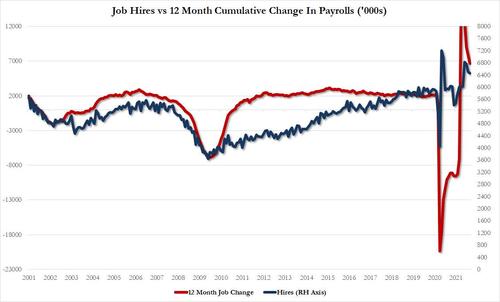 But perhaps the most interesting highlight of today's JOLTS report was neither the openings nor the hiring activity, but rather the number of quits, which for the second month in a row soared to an all time high, jumping in September by 164K to a record 4.434 million.  The quits rate increased to a series high of 3.0%, from 2.9%, as quits increased in several industries with the largest increases in arts, entertainment, and recreation (+56,000); other services (+47,000); and state and local government education (+30,000). Quits decreased in wholesale trade (-30,000). The number of quits increased in the West region 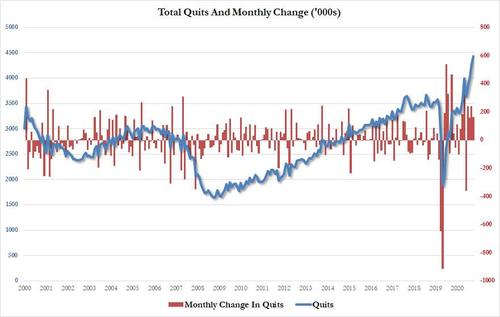 As a reminder, this "take this job and shove it" indicator is generally seen as a real-time proxy of how marketable employees think they are, as they tend to quit jobs and look for higher paying occupations when the job market is red hot. And since it tends to lag peaks in job openings modestly, the surge in quits was probably not all that surprising.