EDITOR NOTE: As part of its effort to run down its cash balance in the Treasury General Account (TGA) to $450 billion before the debt ceiling suspension expired last week, the TGA reduction increased reserves into the banking system which, in turn, made their way into the reverse repo facility (RRP). The current RRP balance stands at $1 trillion. This increase in RRP can reduce money market funds’ demands for Treasuries whose rates are now pinned at record lows. The flows from Treasuries to RRPs are accelerating, and at the current rate may even double. If RRP inflows reach $2 trillion, which can happen at the end of this year, just think of how this might affect the markets moving forward.

It's official: at exactly 1:15pm today, the NY Fed reported that for the first time ever, 86 counterparties parked over $1 trillion in reserves at the Fed's Reverse Repo Facility for overnight 'safekeeping' and collecting a nice, fat yield of 0.05% - representing hundreds of millions in absolutely free money as these are reserves that the Fed has previously handed out to banks - for free - who then turned around and handed it right back to the Fed where it collected a small but nominal interest. 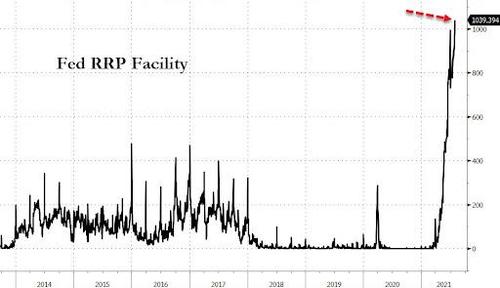 Of course, it is month-end (if not quarter-end) so we do get some window-dressing but even without it, it's only  matter of time before we got consistent $1 trillion prints... which then become $2 trillion and so on.

In fact, the question of how big the Fed's reverse repo facility - which as explained previously is just how the Fed recycles all its massive reserves which it keeps injecting into the financial system (if not economy) at a pace of $120 billion per month - is one we discussed yesterday, and highlighted a calculation by Curvature's repo guru Scott Skyrm who made the following observations: 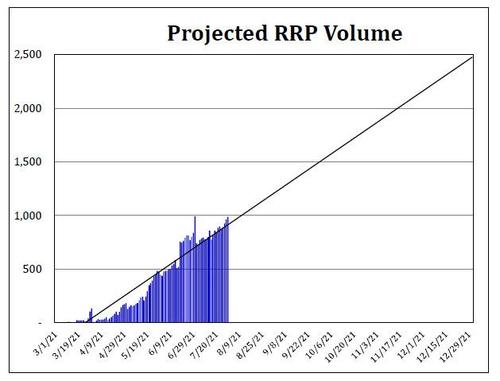 A few rhetorical questions from Skyrm to conclude: what will be the impact of $2 trillion going into the RRP each day? How will this affect the markets? Will the Fed need to adjust the RRP rate again?