Omnibus Bill - A Closer Look At The Details EDITOR'S NOTE: As you already know, the government passed a $1.7 Trillion omnibus spending bill. Is it a swamp money grab, or another round of fiscal insanity as some GOP lawmakers would call it? Well, it depends on what’s in it. But one thing is for certain: Washington likes to spend big when it comes to your money. Here are the alleged grisly details in the article below. Decide for yourself whether the GOP’s response is an overreaction meant as political theater, or if the Biden administration has proven its incompetence once again.

This week, while Democrats still (barely) have enough power to pass it, the 117th Congress is about to rush through a 4,155-page, $1.7 trillion omnibus spending bill that the WSJ Editorial Board has called the "worst in history." 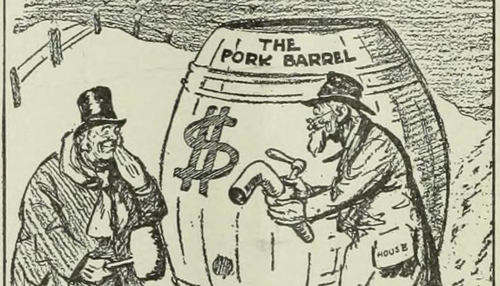 "This is no way to govern in a democracy, but here we are," the board writes.

The final bill was quietly dropped Monday in the 'dead of night' - and by Thursday, if all goes to plan, it will get rushed through for a vote.

"I brought with me the omni, 4,155 pages. When was it produced? In the dead of night. 1:30 in the morning it was released," said Sen. Rand Paul (R-KY) during a press conference with Sens. Mike Braun, Ron Johnson, Mike Lee and Rick Scott - the only dissenting Senate Republicans.

I brought along the 1.7 trillion, 4,000+ page Pelosi-Schumer omnibus spending bill that's being fast-tracked through the Senate. This process stinks. It's an abomination. It's a no good rotten way to run government. We're standing up and saying NO. pic.twitter.com/Wom6xKEeQh

Overall, the bill contains $858 billion for defense - an increase of 9.7%, and $45 billion more than President Biden sought. It will, among other things, give military members a 4.6% raise and help replenish dwindling weapons stocks. $45 billion has also been earmarked for new military and economic aid for Ukraine.

"What is more dangerous to the country? $1.1 Trillion in new debt or as Republican leadership likes to say, “Oh, it is a win! It is a big win. We’re getting $45 billion for the military,”" said Paul. "So which is more important? Which threatens the country more? Are we at risk of being invaded by a foreign power if we don’t put $45 billion into the military? Are we more at risk by adding to a $31 trillion debt?"

My budget predictions were close. Only the omnibus unveiled in the dead of night was later, longer, and more expensive than even I imagined.

Big spenders in Washington know no depths to their fiscal insanity. pic.twitter.com/MCNO7zuaiA

There's also a symbolic $275 million cut to the IRS's annual budget... (out of $80 billion), which the GOP is doing a victory lap over.

It also removes the Vice President's ability to void an election via the Electoral Count Act Reform, and clarifies that the role of the VP in the process is purely ceremonial.

For more details of the swamp money grab, Rep. Dan Bishop (R-NC)'s office has been digging through the text and has found quite a few gems.

One reporter asked Senate Majority Leader Chuck Schumer how the bill was "functional," to require legislators to read a bill of that size in such a short period of time.

"How is it functional process to drop a 4,100 page bill this morning and expect a vote on it tomorrow?" asked a reporter, adding "Most of Congress hasn’t had a chance to review this."

Reporter: "How is it to functional process to drop a 4,100 page bill this morning and expect a vote on it tomorrow?"

Schumer: "The bill has been carefully worked on [and] most of the provisions were well known weeks and weeks in advance." pic.twitter.com/PLBO3JOdig

To which Schumer replied: "The bill has been carefully worked on by the appropriations committee for a very, very long time. Most of the provisions were well known weeks and weeks in advance. Getting this bill done for the American people, which really matters, is the most important thing."

🎄 I wrote and performed my own scary version of 'Twas the Night Before Christmas 🎄 Enjoy! pic.twitter.com/IHI0uNyW0N