Opinion: If You Don’t Love Silver? You Will Soon

EDITOR NOTE: This piece is about “silver,” or rather, many “silvers” depending on who you are and how you look at it. As the author shows, silver is as much a symbol (of something) as it is a form of sound money. In the US, silver is associated with a certain type of “Americana,” or in some cases, an American (sub)culture, which sees in the metal both the essence and function of freedom. Others see silver as a short-term speculative object, while most precious metals investors may see it as a store of value. There are many ways to look at it. What does it mean to you?

There’s something about silver that drives certain individuals nuts.

If gold was the metal that drove the conquistadors mad, in recent decades silver has had the power to induce near-psychotic states among its holders. I almost wrote “investors”, but that is too dispassionate a term for the true believers in silver…

That was in the Financial Times early this month.

I must confess – I am guilty as charged. Silver is like crack to me. I can never really get enough of the stuff, and the urge to buy more of it is a temptation I need to keep under control. There’s just something about its lustre and weight that’s hard to describe… but kindles a relentless desire to acquire more of it.

While I was originally drawn to silver from an investment angle, I now see myself as less of a silver investor as I do a silver collector – I own a lot of the stuff, and find it hard to imagine a scenario where I wouldn’t want to own any.

For a certain kind of American silver is part of an ideology.

It goes along with owning a semi-automatic rifle with lots of spare ammunition. Canned goods. Conspiracy theories. Contempt for urban liberals. They are way past voting Republican. The most committed are “silver stackers” who squirrel away stacks of silver coins to trade for essentials after societal collapse.

Do not argue with these people. Just back off, without making any sudden or threatening movements.

I’ll leave it to your imagination just how much of that description applies to me. But fittingly, this derision of the silver stackers which was titled “Don’t bet on the silver boom” and gave a bearish case for silver was published on 3 July… right before silver started booming: 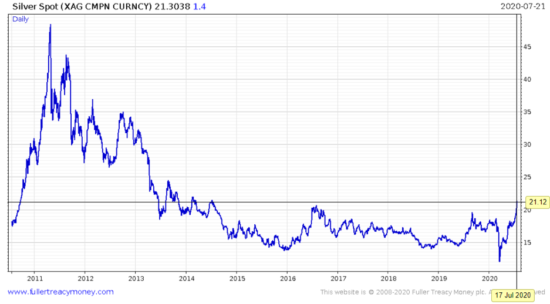 That’s the silver price in dollars, where it has climbed back to the highs of 2014. In pounds, the price of silver has made it further, back to 2013 levels.

In the depths of March, when silver was plummeting, I said the silver buying opportunity of a decade was coming (When crises occur, this asset mysteriously disappears – 17 March). Just as silver got whacked in the depths of the financial crisis before booming afterwards, I argued that the same thing was happening during the WuFlu shock, with silver primed to boom in the wake of all the money printing afterwards.

Tavi Costa, a fund manager who my colleague Kit Winder had a podcast with, posted a chart recently arguing a similar point, declaring, “This is it. The silver rush has begun”: 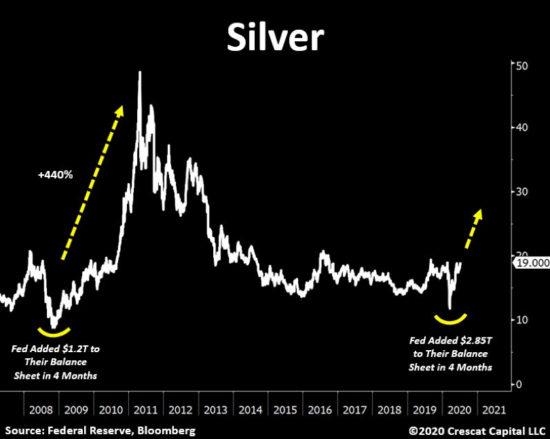 In our issue of The Fleet Street Letter Monthly Alert for March we laid out the way in which investors could load up on silver, not only without paying the premiums (which had spiked hugely), but at a discount. It’s looking like a good decision.

But Charlie Morris, our own fund manager and who’s prospered for decades in the industry due to his careful approach, sees a couple more boxes that need to be ticked before we really know if the silver rush is beginning…

This is a chart of the silver-to-dow ratio, with its 50-month moving average in blue trailing alongside it, courtesy of macro strategist Lyn Alden on Twitter.

As you can see on the far right-hand side of the chart, and as Alden has pointed out, silver has broken through its 50-month moving average (a strong trend indicator) for the first time since 2002: a very bullish signal.

Charlie though, thinks we need to see silver moving against other stockmarket indices as well before we can be sure silver gonna run for it – the Dow Jones is only 30 stocks after all.

To quote Charlie, “Silver to Dow first. Then silver to S&P. Then finally silver to Nasdaq. Then we know it’s real.”

Silver rising against the Nasdaq (the internet stocks) would definitely signal a change in the tides. I wonder how soon it’ll happen – but it’s looking good so far. I sure as hell don’t think we’re going to see silver anywhere near where it got whacked in March any time soon.

I’ve always got time for silver bugs and the silver community in general. You can go down some wild – nay, feral – rabbit holes, but it’s full of interesting characters, theories, and intrigue.

Several years back, when I was just discovering this community (deep in the forests of “Silver Bug Island”), I remember reading a great tract from one of the most devout silver bugs out there on how “everybody loves silver”.

One after the other, paragraph by paragraph, he argued how the US Founding Fathers, the population of China, manufacturers, environmentalists, “the military”, honest governments, women, miners, investors, inventors and scientists, JFK, JP Morgan, and even God – in that order – “LOVE SILVER!”

Good times. It was quite a read, and he made a compelling and verbose argument for each party. But I’ve been wondering about the environmentalist’s love for silver again.

Next week, my colleague Kit Winder is hosting an online event, a sequel in fact, to our very successful “Beyond Oil” series. He’s been interviewing some very interesting figures in the space – including “The Green Taliban”, no less – on what the future holds for renewable energy technology (if you haven’t signed up to watch it yet by the way, you can do so here).

Back during the last silver boom which peaked in 2011, one of the main narratives that kept being spun in the silver world was the use of silver in the renewable energy technologies of the future. The use of silver in solar panels was something often repeated and written about. This attracted broader interest to the silver space and supported the silver price.

With all the talk about green energy these days and, importantly, all of the money being thrown at the sector by governments and investors alike… I wonder if we’ll see a similar narrative about silver’s green properties emerge soon.

It could be an incredibly potent mix for the silver price – the hard money silver bugs on one side, and the green ESG investors with boatloads of cash on the other.

Whatever happens, we’ve yet to discover just how much “everybody loves silver”…