EDITOR NOTE: The motto when dealing with hurricanes, which also applies to investing is, "prepare for the worst, hope for the best". Right now, there are investing storms on several fronts that could create a worst-case scenario for investors that you need to start preparing for now. The first issue is that the billions of dollars in the Democratic spending plan could cause the U.S. to hit the debt ceiling and default on its loans, which would crush the bond market, among others. Next, there is Fed tapering coming, which will take the legs out from underneath the stock market that has been artificially propped up by the Fed’s QE policies. There is also rising inflation, massive stimulus packages, and the Fed printing money to create the appearance of pandemic recovery. The housing market bubble could also be about to burst as supply could come rushing in as forbearance programs come to an end, and this is all mixed with the uncertainty around the rapid spread of the Delta variant. It is time to hope for the best but prepare for the worst, and, for many, that preparation means stocking up on non-CUSIP gold and silver.

Having been Puerto Rico residents for almost three years now, Shane and I have learned a few things about living in the tropics. In Dallas, we didn’t often think about hurricanes, though we did have tornadoes and severe thunderstorms. Ditto for earthquakes. North Texas is pretty stable, geologically speaking.

Now hurricanes and earthquakes are part of normal life. We expect them to happen, and indeed they have happened since we came here. They weren’t too bad but could have been much worse. So, we have plans and precautions to deal with them, as does everyone else here. Last year, a hurricane came through and decided to drench the eastern part of the island and simply miss us. We had no wind or rain. But we were prepared, as were our neighbors. It’s just part of life. But then that same storm tragically devastated the Bahamas.

I was thinking about this in connection with my Sandpile letter, which we again reposted recently. Like those fingers of instability, our ability to predict the weather is far less than perfect. Technology can tell us when hurricanes/tropical storms are out there and the general direction they are moving. It’s still far from certain exactly where they will make landfall, and how strong they will be at the time. They can leave one corner of this small island devastated and the rest untouched.

So, the prudent course is to prepare for the worst, hope for the best—a trite saying but in this case it’s true. We would rather be overprepared than caught by surprise.

Investors face hurricanes, too, with even more uncertainty. The storm could hit someone else, or go back out to sea and dissipate. Do you bet everything that it will? I don’t.

Right now, several potentially big storms are brewing. They could be minor annoyances or catastrophic disasters, or anywhere in between. I truly hope they all resolve with minimal fuss. But they may not. They could even combine into a perfect storm of even greater magnitude… so now is the time to prepare.

I’ll describe several related but independent problems. The first one is US federal debt, which is approaching its limits. Literally so; the statutory debt ceiling, which Congress suspended for two years back in 2019, took effect again this month. The Treasury is now shuffling books to buy some time but we will reach the $28.5 trillion limit in the next few weeks.

Unlike the Federal Reserve, Treasury can’t create money. It manages the government’s cash flow by issuing new debt as needed to pay for the spending Congress approves. It has discretion on when to borrow, and in what amounts, so “cash on hand” can vary a lot. Treasury built up a huge cash balance last year and has been drawing it down in 2021, as this Gavekal chart shows. 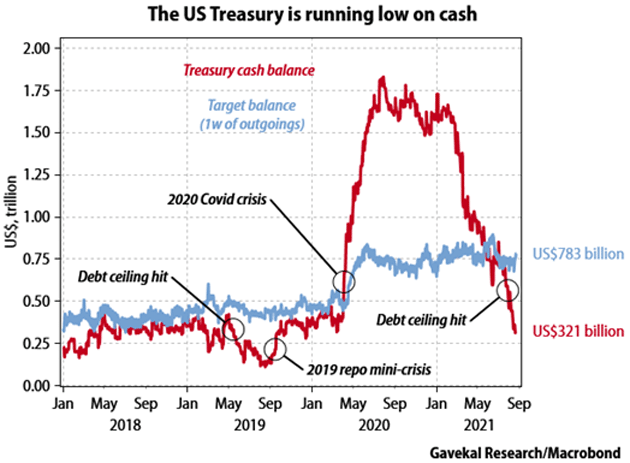 The blue line is Treasury’s “target balance” needed to cover the spending it knows will occur. Notice that the target balance increased rather dramatically at the beginning of the COVID crisis and it has not changed. The actual balance (red line) plunged this year and is now almost $500 billion below the target, and headed lower still.

The “easy” solution is for Congress to raise the debt ceiling, which obviously doesn’t restrain actual spending, and may actually increase spending by letting them postpone more effective reforms. But, as with everything else these days, that collides with other issues and becomes a political fight.

Congress is presently considering two infrastructure bills, the smaller of which has modest Republican support and is actually what we mostly think of as infrastructure, plus a much larger “human infrastructure” plan the Democrats will try to pass on their own. It includes universal preschool, free community college, and subsidized long-term healthcare as well as a host of other government benefits.

It is not clear the second bill can pass, as some moderate Democrats are not fully aboard. They could, and I suspect will, attach a debt ceiling increase to that bill. But regardless, they have to somehow modify the debt ceiling soon. If they don’t, some government spending will have to stop and Treasury debt holders may miss interest payments—the kind of thing that would constitute “default” for a private borrower.

The chances of this actually happening are small, but very real. Having been through this what seems like a dozen times, there will be lots of drama and then the debt ceiling will be increased.

All this has market impact even if ultimately resolved. Government spending and borrowing is critical to bond market liquidity. When this last happened in 2019, the related liquidity crisis forced the Fed to end its attempt to normalize policy. The FOMC decided in an October 4, 2019, secret meeting, unrevealed until a week later, to permanently add reserves to the system.

As I said at the time, “We have reached a point where the Fed believes it must have nuclear weapons just to swat flies.” A few months later COVID came along and the Fed enthusiastically fired those nukes. That brings us to the next problem.

This week is the Fed’s Jackson Hole retreat—again virtual this year, but still an important policy decision point. Powell’s Friday morning speech was basically a nonevent. He did signal the initial taper could begin this year if all goes well. The speech was uber-dovish overall. Is the Fed really going to take its foot off the gas when Congress may ensure Fed support is needed more than ever? Hard to believe.

A further complication, as I discussed recently in Policy Errors Have Consequences, is the Fed’s own leadership is uncertain. Powell’s term as chair expires soon. President Biden still hasn’t announced whether he will renominate Powell or appoint someone else, although, as Peter Boockvar said, this speech did sound like someone campaigning to retain his job.

Treasury Secretary (and former Fed chair) Janet Yellen wants Powell to stay. This week we learned that much of the White House staff also wants Powell reappointed. While progressive Democrats wanted Biden to appoint Lael Brainard or another uber-dove, Powell increasingly seems like the likely choice.