Printing Money Will Be Bullish For Gold and Silver

EDITOR NOTE: This morning, stocks retreated as 10-year Treasury yields spiked to a 14-month high. This is a strong sentiment signal that we’re moving toward an environment of high inflation. Other not-so-good news is that the jobless claims jumped higher to 770,000 despite efforts to relax economic restrictions. These are likely to cause near-term volatility. But looking to the longer term, what’s the likelihood that the national debt may double to more than $70 trillion by the end of Biden’s first term? After his $1.9 trillion stimulus is another proposal for an additional $4 trillion. When the government prints money and adds to the national debt, that’s a long-term claim on your future income and wealth. This is why bitcoin and other virtual currencies have been seeing increased capital inflows. Cryptos may be a trendy and familiar investment particularly among millennials. It may be less cumbersome than purchasing and storing physical gold and silver. But in the end, non-CUSIP gold and silver are the only investments that will give you real inflation protection, financial privacy, sole accessibility, and real (intrinsic) value.

We have seen a tremendous anomaly in the gold market since the high was made at $2089. Even with that high, it did not seem to reach its natural mean based on the crisis in March, when gold became a currency again. Gold shot up plus $600. We don’t think that is the only major action we are going to see in gold and silver. Silver particularly seems ready for a major move. The precious metals markets seemed to discount all of the damage the pandemic was causing and the metals stayed relatively low in price. There was a lot of selling pressure.

The Biden administration just passed the trillion dollar stimulus package. A staggering amount of money has been printed since March 2020. Such printing of money should be bullish for precious metals. We also still don’t know the totality of the damage wreaked by the pandemic. Crude oil is at $67, when just last March it went negative $37 a barrel. It seems logical that crude oil should not have bounced back so much in the face of the damage caused by the pandemic and the reeling economy. Soybeans are up to $14.60 a bushel. Wheat is up to $6.93. Corn reached $5.74. Commodities are roaring up and appear to be beginning to show that inflation is here. The Fed says that inflation is running below 2%, but many commodities, especially food and energy, are certainly showing a great deal of rising prices - or inflation. Inflation appears to be running at fairly high levels already.

In the 1970s, inflation hit double digits right after the US dollar went off the gold standard. In 1981, interest rates were at 14% or 15%. Gold hit $800 an ounce. Gold was around $135. Some experts say that high interest rates are bearish for gold, yet history appears to disagree. The 10 year note is moving up, suggesting we are moving into an inflationary environment. The 10-year note is at 163.50, a new high. It will be interesting to see how the precious metals markets react.

The administration is printing huge amounts of money in the form of stimulus and debt is increasing rapidly. It may exceed $70 trillion by the end of the Biden administration, which is double the debt now. If that happens, inflation will hit new highs and the US dollar will probably collapse. All of these factors suggest strongly that you should be long gold and silver, which are real money, not fiat money. Old principles do not change and gold and silver have been money for thousands of years, particularly when paper currencies collapse, which we appear to be witnessing. Faith in governments and their paper currencies appears to be waning, which is, in part, why Bitcoin and other virtual currencies are finding huge interest.

The Eurozone is buying more of their own bonds. They, like the US, continue to provide stimulus to the market. Again, such a policy is inflationary.

The sooner we reopen the economy the better given how the economic fundamentals are in dire straits. Unemployment is still high. Small businesses have gone broke by the thousand. Inflation is hitting commodities. Interest rates are rising. The dollar, therefore, is losing value. Gold and silver are an incredible opportunity to retain value and gain significant value in these challenging times.

Gold mining shares are also highly likely to rise in price significantly. They are currently at fire sale prices. Be careful picking individual stocks, but you can trade the GDX as an index. We also trade NUGT, a two-to-one leveraged ETF. It is an exciting instrument to trade if you want to manage margin risk.

We strongly believe that gold and silver will react to the fundamentals sooner or later and will skyrocket to all-time highs. We are buying pullbacks and increasing our long-term long position in gold and silver. 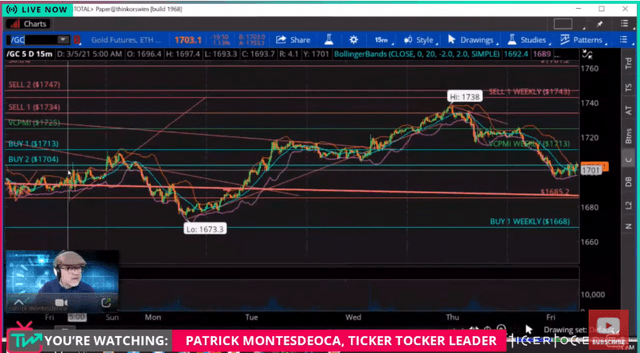 Gold is at $1703.5. It is down about $19. We use the Variable Changing Price Momentum Indicator (VC PMI) artificial intelligence algorithm to analyze the markets. The Buy 1 daily level is $1713 and the Buy 2 daily level is $1704. The average daily price is $1725. Yesterday we saw the completion of a pattern into an area of distribution of supply, where sellers came into the market. The supply is overwhelmingly paper, but that doesn’t matter in relation to the price action. Gold is trading below the VC PMI Buy levels, so the VC PMI recommends buying into the market at these levels.

The gold market has come down to the extreme levels around Buy 2. If we activate a trigger, then there is a 95% chance that the market will revert back up toward the mean.

The daily and weekly VC PMI signals are in harmony. Gold is oversold. If we close above $1704, then we will have a trigger to buy. Gold hit $1705, so we recommend buying.

The weekly average of $1713 matches the daily Buy 1 level of $1713. It is a harmonic alignment, which is a powerful signal to buy with a strong probability that the market will move up from there. If it closes above $1713, the daily and weekly signal will support each other. Then $1725 will be activated as the daily target, while the weekly target is $1743.

Silver is at $25.65, down .54. We got about a $2 move yesterday. The volatility is increasing tremendously. Silver has activated a buy trigger at $25.55, the Buy 2 level. Since then, silver has been reverting from that level. If you do buy, we recommend a maximum catastrophe stop, depending on your profile. We use a $1,000 stop, regardless of the signal, but yours will vary depending on your profile. We do not recommend straight stops, or you will get stopped out constantly. For conservative traders, you can place a stop at the trigger point. You may get stopped out, but you won’t lose much, if anything. The targets above will be the weekly average price of $25.77 and then the daily target of $25.87. If it closes above that level, then it will activate the final daily target of $26.21. That would be a considerable move. So silver is at an extreme level below the mean in an oversold condition.

Ending the Link to Gold Unleashed an Inflationary Period

Biggest Mines in Decline: Could Gold Regain Its Luster?

Is Biden Trying to Collapse the US Dollar?