EDITOR'S NOTE: Q3 GDP was revised slightly upward last week but still “missed by a mile,” according to Zero Hedge. Personal consumption did rise a bit but “drilling further into the data, real disposable personal income - personal income adjusted for taxes and inflation - decreased 4.0% in the third quarter after decreasing 29.1% in the second quarter.” As for inflation, it rose as well, although it rose in line with inflation, which some in the government certainly see as a victory. Now, all we can do is wait for the Q4 data and see how much worse (or slightly better) it’s gotten.

After the preliminary read of Q3 GDP disappointed bigly last month, when it came in at just 2.0%, missing expectations by a mile, moments ago the BEA disappointed data watchers (or what's left of them today) again when it reported that its first revision of Q3 GDP data was 2.1%, below the 2.2% expected, if slightly better than the 2.0% initial estimate. 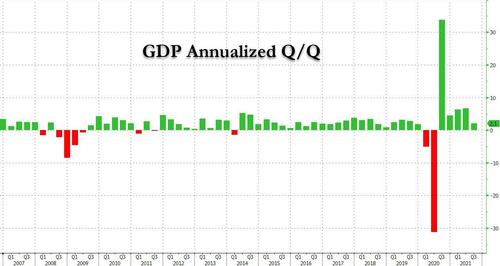 Of note, personal consumption rose a 1.7% annualized in 3Q after rising 12.0% prior quarter; this compares to expectations of 1.6%, or for the initial estimate to be unchanged.

Here is a more detailed breakdown: 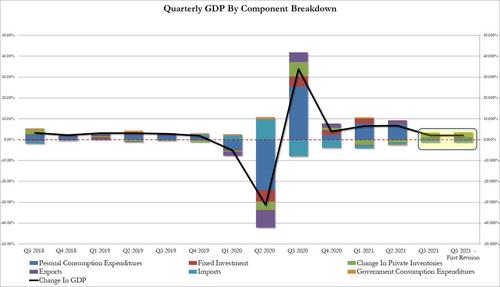 Drilling further into the data, real disposable personal income - personal income adjusted for taxes and inflation - decreased 4.0% in the third quarter after decreasing 29.1% in the second quarter. Current-dollar DPI increased primarily reflecting an increase in compensation of employees. The increase was partly offset by a decrease in government social benefits related to pandemic relief programs, notably unemployment insurance. Personal saving as a percentage of DPI was 9.6 percent in the third quarter, compared with 10.9 percent (revised) in the second quarter.

Of course, since this data is extremely stale, nobody will care what GDP did in the late summer with all eyes now fixed on Q4 GDP where the Atlanta Fed expects the number to come in above 8%, although we in turn expect this print to drop sharply in the coming weeks.