Quantifying the Cost of Military Equipment Left Behind In Afghanistan

EDITOR NOTE: In addition to the geopolitical and humanitarian catastrophe of Joe Biden’s decision to tuck and run from Afghanistan, there is a massive financial cost as well. In the last two decades, the U.S. provided Afghan security forces an estimated $83 billion worth of training and equipment, including $3 billion worth of aid in 2021 alone. When the U.S. military pulled out, they left behind millions, if not billions of dollars, worth of military vehicles, aircraft, equipment, and weaponry. Why don’t we know the exact figure? Because the Biden administration is now hiding the reports about the value of the military equipment that is now in Taliban, and possibly ISIS hands. Republican Senators summed it up perfectly in a letter to Secretary of Defense Lloyd Austin, saying, "It is unconscionable that high-tech military equipment paid for by U.S. taxpayers has fallen into the hands of the Taliban and their terrorist allies."

The U.S. provided an estimated $83 billion worth of training and equipment to Afghan security forces since 2001. This year, alone, the U.S. military aid to Afghan forces was $3 billion.

Putting price tags on American military equipment still in Afghanistan isn’t an easy task. In the fog of war – or withdrawal – Afghanistan has always been a black box with little sunshine.

Not helping transparency, the Biden Administration is now hiding key audits on Afghan military equipment. This week, our auditors at OpenTheBooks.com reposted two key reports on the U.S. war chest of military gear in Afghanistan that had disappeared from federal websites.

U.S. taxpayers paid for these audits and the U.S.-provided equipment and should be able to follow the money.

After publication, the GAO spokesman responded to our request for comment, “the State Department requested we temporarily remove and review reports on Afghanistan to protect recipients of US assistance that may be identified through our reports and thus subject to retribution.” However, these reports only have numbers and no recipient information.

Furthermore, unless noted, when estimating “acquisition value,” our source is the Department Logistics Agency (DLA) and their comprehensive databases of military equipment.

Between 2003 and 2016, the U.S. purchased and provided 75,898 vehicles and 208 aircraft, to the Afghan army and security forces, according to a Government Accountability Office report. 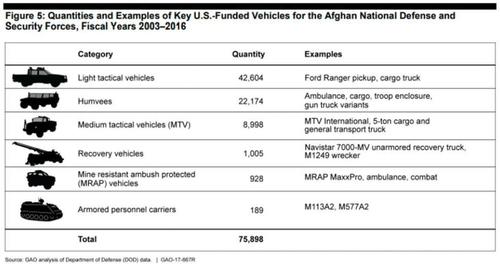 Here is a breakdown of estimated vehicle costs: 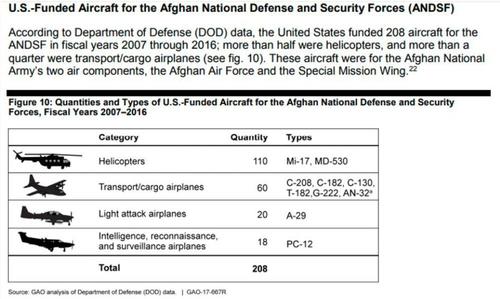 The Afghan air force contracted for C-208 light attack airplanes in March 2018: seven planes for $84.6 million, or $12.1 million each. The airplanes are very sophisticated and carry HELLFIRE missiles, anti-tank missiles and other weaponry.

The PC-12 intelligence, reconnaissance and surveillance airplanes use the latest in technology. Having these planes fall into Taliban control is disconcerting. Civilian models sell new for approximately $5 million each and the military planes could sell for many times that price.

Basic fixed-wing airplanes range in price from $3.1 million to $22 million in the DLA database.

Of course, helicopter prices also range widely depending on the technology, purpose, and equipment. For example, according to the DLA, general purpose helicopters range in price from $92,000 to $922,000. Observation helicopters can cost $92,000 and utility helicopters up to $922,000.

Even if the Taliban can’t fly our planes, the parts are very valuable. For example, just the control stick for certain military planes has an acquisition value of $17,808 and a fuel tank sells for up to $35,000.

In 2017, the U.S. military lost $174 million in drones that were part of the attempt to help the Afghan National Army (ANA) defend itself. But the ANA didn’t immediately use the drones and then lost track of them.

This week, the SIGAR audit on the $174 million drone loss disappeared from its website. 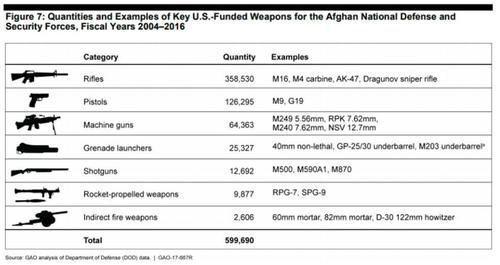 The howitzer is the modern cannon for the U.S. military and each unit can cost up to $500,000; however most are in the $200,000 price range. At the higher end, there’s GPS guidance on fired shells.

Here are the costs of other types of weaponry provided to Afghan forces: 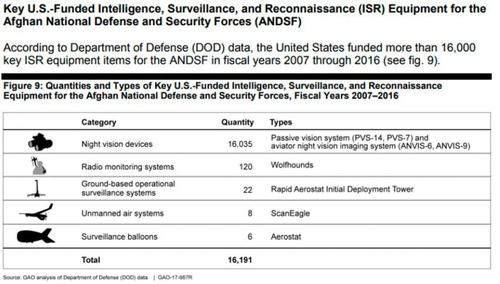 Each Aerostat surveillance balloon costs $8.9 million. Each ScanEagle drone costs approximately $1.4 million according to recent procurement news. Even as late at 2021, U.S. appropriations for the Wolfhounds radio monitoring systems approached $874,000.

Night vision devices: The total cost for the 16,000 night-vision goggles alone could run as high as $80 million. Individually, the high-tech goggles were priced between $2,742 and $5,000 by the DLA. Other equipment like image intensifiers are commonly priced at $10,747 each; however, sophisticated models run as high as $66,000 each.

However, if the Taliban doesn’t have the expertise or technologies to program the equipment, it will become obsolete quickly. Or it could be sold off to other countries who wanted to acquire U.S. technology.

An unnamed official told Reuters that current intelligence assessment was that the Taliban took control of more than 2,000 armored vehicles, including American Humvees, and as many as 40 aircraft that may include UH-60 Black Hawks, scout attack helicopters and ScanEagle military drones.

“We don't have a complete picture, obviously, of where every article of defense materials has gone, but certainly a fair amount of it has fallen into the hands of the Taliban,” White House national security adviser Jake Sullivan said Tuesday, The Hill reported.

“And obviously, we don't have a sense that they are going to readily hand it over to us at the airport.”

Republican Senators have demanded that there be a full count of U.S. military equipment left in Afghanistan.

In a letter to Secretary of Defense Lloyd Austin, the lawmakers said they were "horrified" to see photos of Taliban militants taking hold of military equipment, including Black Hawk helicopters.

"It is unconscionable that high-tech military equipment paid for by U.S. taxpayers has fallen into the hands of the Taliban and their terrorist allies," the lawmakers said in the letter.

"Securing U.S. assets should have been among the top priorities for the U.S. Department of Defense prior to announcing the withdrawal from Afghanistan."