EDITOR'S NOTE: As the supply shortage is sweeping the nation, U.S. retailers are doing everything they can to try and convince everyone that things are not as dire as they seem. Zero Hedge reports that stores across the country are “fronting” products to make shelves appear fuller. This practice involves pulling products to the front of the self, even if it’s just a single row or a single product. Zero hedge says this is so, “for now, retailers are creating the appearance that everything is fine so empty store shelves don't spark buying panic that would strain supplies even more,” but also shows a worrisome picture of empty shelves in the Soviet Union just before its collapse in the early 1990s.

Americans are waking up to the fact that shortages of everyday products such as ice cream, frozen food, soda, chicken, spices, coffee, fish sticks, snacks, and toilet paper are popping up all over the country as supply chains remain heavily congested 19 months after the virus pandemic first began. Instead of leaving some store shelves bare, which might insight fear and buying panic among consumers, some stores are lining their empty shelves with meaningless items to appear as full as possible.

A little more than a week ago, hashtag #EmptyShelvesJoe was one of the hottest trends across Twitter but was quickly squashed by Twitter police. People from all over the country went to their local supermarkets and big-box outlets to point out how supply chain snarls have left some store shelves bare.

Retailers have since panicked, and social media users are now pointing out that some store shelves are lined with single items to "hide the supply shortage."

Our Safeway appears to be trying to hide the supply shortage by using single lines of products to fill shelves. Leading to this: pic.twitter.com/CDXR67FYRu

A user tweeted a picture of what appears to be single boxes of Kraft Macaroni & Cheese lining multiple shelves. 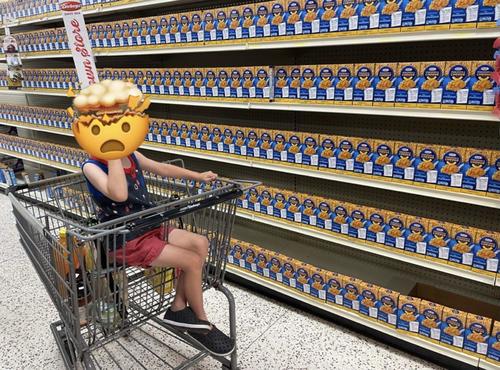 One of the most stunning attempts to keep the appearance that everything was fine was when one retailer lined multiple aisles with dozens and dozens of foldable chairs.

Some on Twitter explained this is just part of the retailers "fronting" merchandise which means they're bringing everything to the front to make the store look as packed as possible.

What's troubling is that retailers are running out of items, and it's becoming entirely obvious now as congested supply chains may suggest that certain products will not be available in time for the holidays. It's okay if stores run out of PlayStations and Nerf Blasters, but if shelves in food sections start to go bare - this could be very problematic.

Remember what happened in the Soviet Union right before the collapse?

For now, retailers are creating the appearance that everything is fine so empty store shelves don't spark buying panic that would strain supplies even more.