EDITOR'S NOTE: The twilight of the Golden Age of Travel is upon us, according to social historian Dominic Sandbrook. Imagine a dystopian scenario in which energy costs are prohibitively expensive, airline flights are canceled, and mobs of angry people crowd roads, stations, and airports. Apocalyptic theories are as fascinating as dystopian fiction but unlike fiction, and neither is all that far off from (political) messianic fervor or mass paranoia. For Sandbrook, our current transportation woes represent the end of the world as we know it. Might it bring about a narrowing of mind and culture or might it inspire a renewed sense of localization? Where does cross-border trade fit into this scenario? Isn’t it more likely that divisions in wealth and access will further widen and solidify? Sandbrook’s projection reads more like a literary exercise than it does a viable theory. But to be fair, the future does look grim. It’s just that every generation has an image of the future, and although certain aspects of those imagined futures do materialize, the actual future never quite resembles those imagined. They join the “hauntology” dust bin along with every “future that never happened.” Still, the article below makes for a fun read. It just assumes that the changes in the present and future are anchored on a “constant” transition from a fixed past to a fixed (and therefore predictable) present and future. There is only one constant: change. And change is a disruptor of all things “fixed.”

Just imagine a world in which, almost overnight, the transport system breaks down. Flights across the world are cancelled, leaving thousands of travellers stranded far from home.

Airports are crowded with mobs of angry, frightened people. Even greater throngs descend on the railway stations, desperate to squeeze on to the horribly overcrowded trains.

Meanwhile, the roads fall eerily silent, as rocketing petrol prices make it prohibitively expensive for all but the richest to drive long distances.

For businesses across the Western world — hotels and restaurants, cafes and newsagents, garages and tour operators — this would be nothing short of a disaster.

It would leave us poorer, more isolated, more introverted and more ignorant: prisoners not just on our own island, but in our own towns and our own homes.

It sounds like the stuff of some dystopian fantasy. In reality, it's the story of what's been happening over the past few weeks.

This morning, thanks to the biggest nationwide strike for 30 years, railway stations across Britain have fallen silent. More than a million commuters have been forced to work from home or take to the roads, with enormous queues expected to block motorways and major arteries.

In London, Tube workers are striking all day, shutting down much of the capital's Underground network. The authorities have begged people to stay at home, but any remaining services are expected to be packed to capacity.

And there's worse to come. More strikes are scheduled for Thursday and Saturday, as part of the RMT's campaign for higher pay and an end to redundancies. 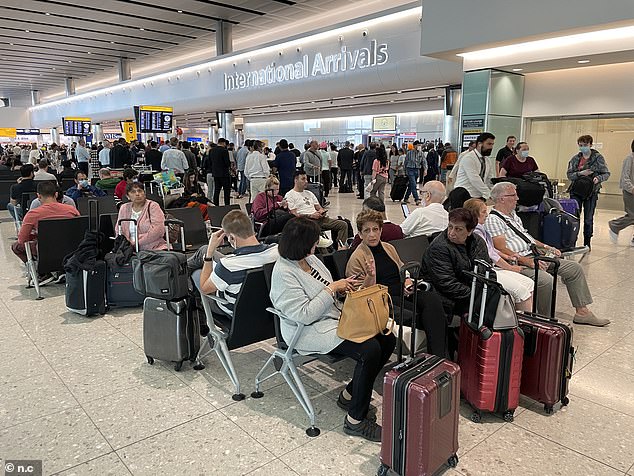 The union boasts of 'the biggest rail strike in modern history' bringing Britain to a standstill.

And should the disruption continue — endangering supermarket food deliveries and causing forecourt pumps to run dry — some analysts warn the Government may be forced to suspend remaining passenger services to keep freight moving.

There's even grimmer news ahead. With petrol prices soaring, the RAC estimates that it now costs an eye-watering £103.13 to fill a typical family car with petrol, and a whopping £106.79 for a diesel car.

For some families, the prospect of a quick, cheap drive to the shops is already disappearing out of reach.

And if you're hoping to go abroad this summer, you may have to think again. In the past few weeks, Europe's airports have descended into utter chaos, with gigantic queues at security and tearful scenes as flights were cancelled.

Gatwick has urged airlines to slash services to ease the pressure, while easyJet, Britain's biggest budget airline, is cutting thousands of summer flights.

And to make matters worse, cabin crew working for Ryanair in Spain have voted to hold six days of strikes in late June and early July, which could have a devastating impact on families' holidays.

Two weeks ago, Tom Rawstorne wrote in the Mail of his nightmare family holiday to Malta, which was plunged into chaos when the easyJet flight home was cancelled at the last minute.

In the end, his family had to fly home via Barcelona and Dublin, at a cost of more than 30 hours, one lost suitcase and some £2,000.

Such stories are bound to become more common in the next few months. Indeed, industry insiders warn that the cancellations, queues and disappointments could last well into 2023 — if not longer.

But as expensive and distressing as they are, these dramas are merely symptoms of a much deeper and more worrying malaise.

To put it simply, the Golden Age of travel is over. And for people like me, who grew up with package holidays, came of age with city-break flights and never questioned the cheap petrol, regular trains and busy skies on which our modern economy depends, all of this represents a colossal shock.

Just think of all the things we take for granted. The 07.57 commuter train to London. The long drive to visit relatives on the other side of the country. The weekend meander down country lanes. The Easter holiday on the Cornish coast. The weekend away in Berlin or Barcelona. The fortnight in Spain at the height of summer.

Not everybody can afford all these things, of course. But they've become part of our collective imagination.

What we rarely consider, though, is how unusual this is. Although today's academics are obsessed with immigration, the fact is that most people in recorded history barely moved from their home villages.

Even in the middle of the last century, millions of people lived in the towns in which they had been born, and very rarely visited other parts of the country.

It's true that the rich have always travelled. In some ways our own summer holidays are simply streamlined versions of the Grand Tour of the 18th century, when aristocratic young men would spend months, even years, on jaunts through France, Germany, Switzerland and Italy.

Then, as now, people believed travel enriched the mind and the body.