EDITOR'S NOTE: At the onset of its sanctions against Russia, the US and NATO-allied excluded Russia from the global SWIFT payment system, forbade western businesses from operating in the target country, shut off all western exports to Russia, and financially targeted its largest banks and oligarchs. The ruble tumbled as a result, and along with it, the Russian economy. Yet Russia’s financial resilience appears relatively solid: its currency quickly bounced back, and its account balance remains ample to continue financing its war on Ukraine. How’d that happen? Russia is still collecting revenue from its energy exports to Europe and other partners. So, despite the West levying what may be the harshest program of sanctions ever directed toward a single nation, the effects weren’t devastating enough to pummel the belligerent nation to submission. So, what’s the West to do? The article below explores this dilemma in greater detail, outlining the effects the current sanctions may have on the Russian people versus Putin’s war machine. 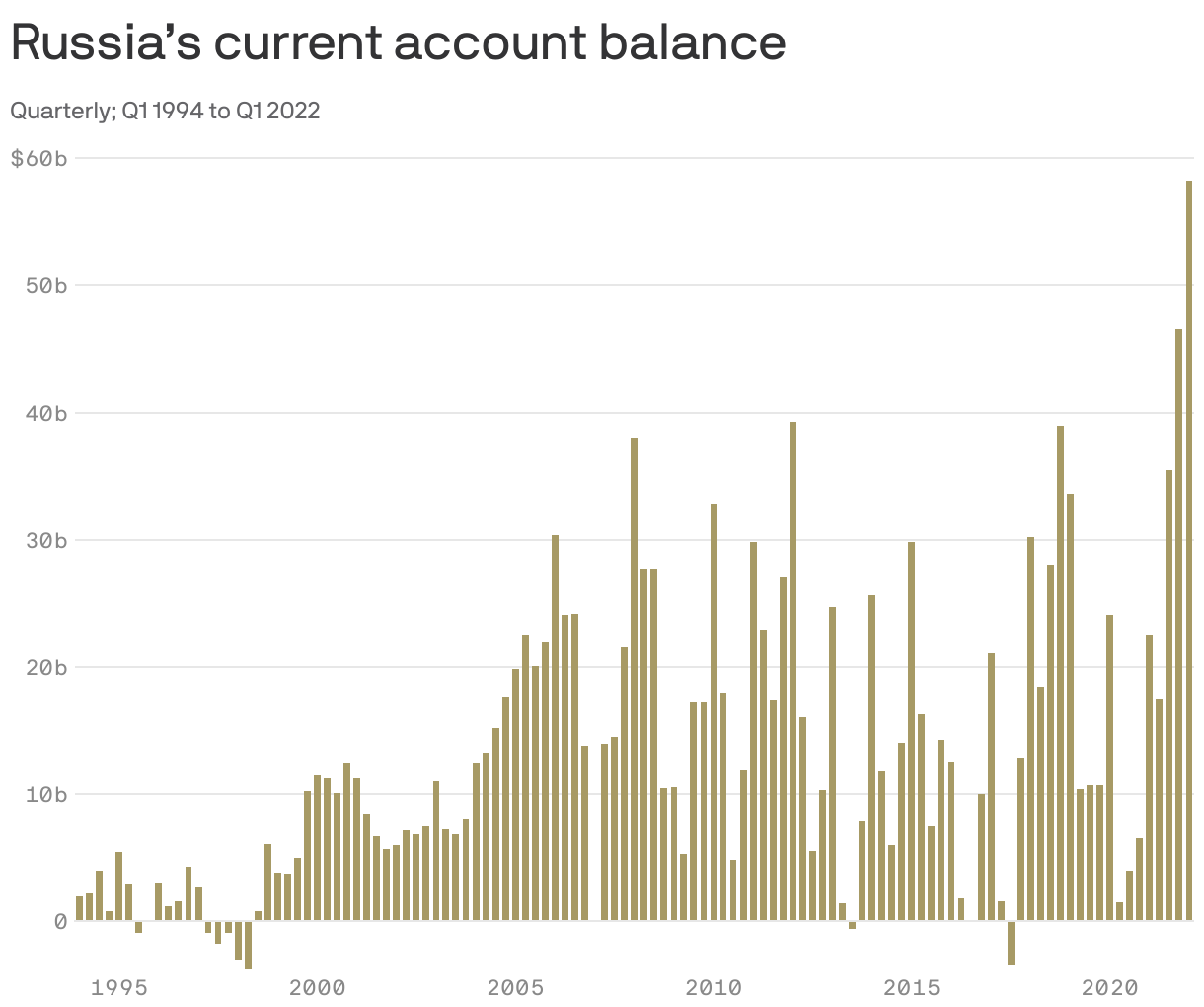 Russia's cash flows soared during the first quarter, despite economic sanctions imposed by the West. The nation benefited from soaring energy prices brought on by its attack on Ukraine, Matt and Emily write.

Driving the news: During the first quarter, the Russian Federation posted a record surplus in its current account — a broad measure of its trade with the world — as surging energy prices translated into a gusher of export revenues.

Details: While Russia remains effectively severed from much of the world economy by Western sanctions, its big account surplus means it can get the money it needs to finance its war, pay government employees, and stabilize its currency by intervening in foreign exchange markets.

Reality check: Russia's ruble, which plunged by roughly 75% after fresh Western sanctions were imposed in late February, has now more than fully recovered — a sign that Russia is finding ways to adjust to its new status as an economic pariah.

Yes, but: A large current account surplus doesn't mean that the Russian economy, or its population, is thriving. The surplus — exports minus imports — in part reflects the fact that imports into the country have fallen sharply.

The bottom line: Russia's financial resilience underscores the fact that if the West really wants to impose pain on Putin, Europe will need to cut off energy purchases.