What Is The FHA Doing With All The Seriously Delinquent Mortgages?

EDITOR'S NOTE: While the number of seriously delinquent mortgages (90-days-plus) on FHA loans has dropped from 12% during the height of the pandemic to 8.5% today, it’s still far higher than the pre-pandemic level of around 4%, per Wolf Street. Foreclosures are surging, but that surge is based on foreclosure moratorium numbers. The actual FHA foreclosure rate isn’t as bad as it was post-2008. That’s because the Fed’s asset purchases — including mortgage-backed securities purchases — have spiked the housing market and eased the pressure on both sides of the equation. Wolf Street explains that what this means is, “the Fed thereby bailed out mortgage lenders and their guarantors once again.”

The FHA – a government agency that insures 7.5 million high-risk, low-down-payment mortgages, including subprime mortgages – has been at the core of the pile-up of delinquent mortgages during the period of the foreclosure moratorium and forbearance, when borrowers didn’t have to make mortgage payments. 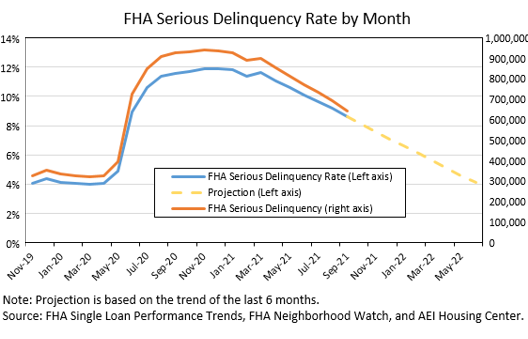 The foreclosure moratorium ended on July 31. When the forbearance period ends for each mortgage depends on the borrower and when the mortgage was entered into a forbearance agreement. For more and more of these mortgages, forbearance is terminating, and this is when the borrower needs to deal with reality, of sorts.

How can a borrower exit the forbearance agreement?

Given the surge in home prices, many borrowers can sell the home for more than the balance of the mortgage; and they would then pay off the mortgage in full, thereby fix the arrearage, cover the selling expenses, and may even have some cash left over. This might be a great time to sell a home, after that kind of run-up in prices. And it solves the problem.

If borrowers can resume making normal payments on the existing mortgage, the missed payments will be added to the end of the mortgage, which moves the mortgage into “current” status.

If borrowers cannot resume making normal payments, they can work out a deal to have the mortgage modified to stretch out the term of the mortgage and lower the payments. If that doesn’t work, they can sell the home and pay off the mortgage.

Borrowers face foreclosure if they cannot meet the requirements of even a modified mortgage, and cannot sell the home for enough to pay off the mortgage.

The rampant price spikes of homes in most markets not only support the sale of the home to cure the delinquency, but also make mortgage modifications easier because many borrowers now have equity in their homes as a result of the home price gains.

Given the surge in home prices, a huge wave of foreclosures – as during the financial crisis – cannot happen. Home prices would have to fall broadly below mortgage balances before foreclosures become a mega-issue, which is what had happened in the run-up to the mortgage crisis.

How are FHA mortgages foreclosures doing?

The foreclosure rate tripled in two months, from 0.2% through July, to 0.7% at the end of September.

The trend shows that over the next few months, foreclosures will likely surge beyond the pre-pandemic levels but are not going to reach the mega-proportions during the Financial Crisis since home sales, after the price gains, provide a functional cure for most distressed homeowners.

Foreclosure starts among FHA mortgages have also jumped, but from ultra-low levels during the foreclosure moratorium, to 2,000 starts in September, compared to the range of 10,000 starts before the pandemic. 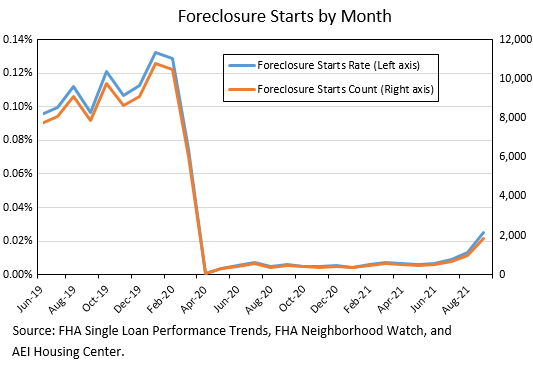 So foreclosures will continue to surge as more FHA mortgages come to the end of their forbearance plans, but they’re surging from the historically low levels during the foreclosure moratorium, and given the massive amount of home-price inflation during the pandemic, are not going to build into the tsunami of foreclosures seen during the Financial Crisis.

This assumes that home prices in those markets don’t head south over the next 12 months.

The Fed engineered this home price inflation with its $4.5 trillion in asset purchases, including purchases of mortgage-backed securities, to repress long-term interest rates, including mortgage rates to record lows, thereby driving up prices. It also created an enormous amount of excess liquidity that needed a place to go, and some of it piled into the housing market, driving up prices. And the Fed thereby bailed out mortgage lenders and their guarantors once again.