Short Supplies of Silver and Fiat Currency Are Leading To Inflation

EDITOR NOTE: What you are about to read is a bunch of important points peppered between some of the most laughable and confused writing (in a genre whose standards simply demand “clarity”). The concepts aren’t technical. The writer’s just a bit confused, so pardon the effort. There’s evidence of “asset inflation,” but not yet “price inflation.” What the author means is that assets such as equities, real estate, and even commodities (think copper, grains) are rising though the latter hasn’t yet impacted consumer prices. Input costs (essentially, the cost of production) are up and it’s just a matter of time before they find their way to the consumer end of things. The author writes, “As we return to a more normal economy, we are going to face challenges. No one knows what is ahead.” Keep reading and you’ll figure out the author is forecasting inflation. So much for a “normal economy,” and the assertion, “no one knows what’s ahead,” right? Was that supposed to cast doubt on the author’s inflationary forecast, his/her expertise, or the data itself? The rest is interesting, particularly the 9 month cycle, which I’ll leave up to you. The rest of the soup is a hodge-podge of rehashed leftovers from other articles. Still, it’s important stuff, particularly if you’re not up to speed with everything that’s going on. The main point is in the title, implying that “too much money is chasing too few goods, “particularly gold and silver, which, as you know, is undergoing something of a shortage (plus, more paper contracts trading than the actual metal). It ends with a nice sales piece on their proprietary indicator; indicating that they must be some kind of a signal provider, Good luck with that.. But let’s say thanks for the rehash! 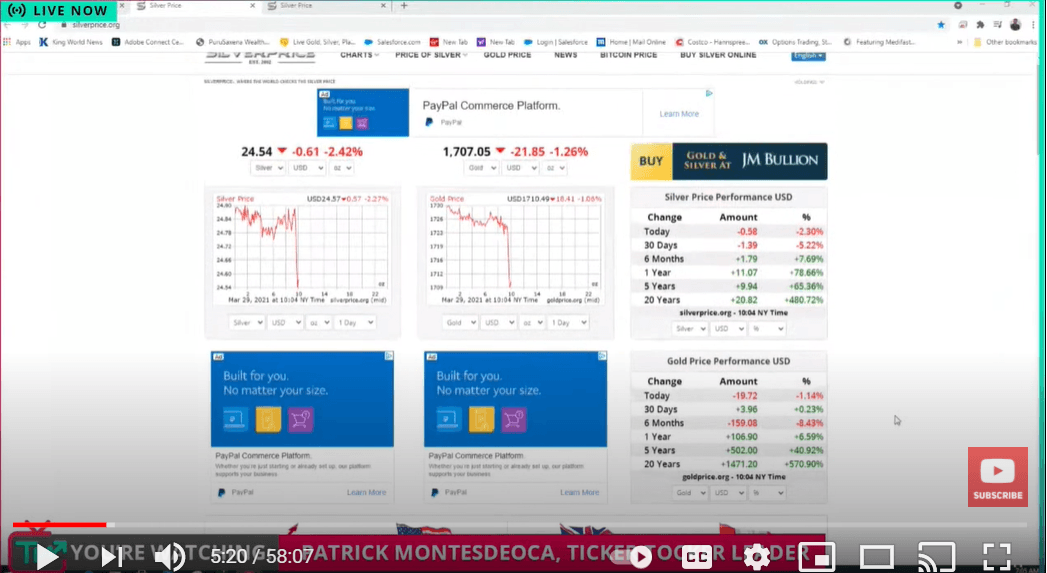 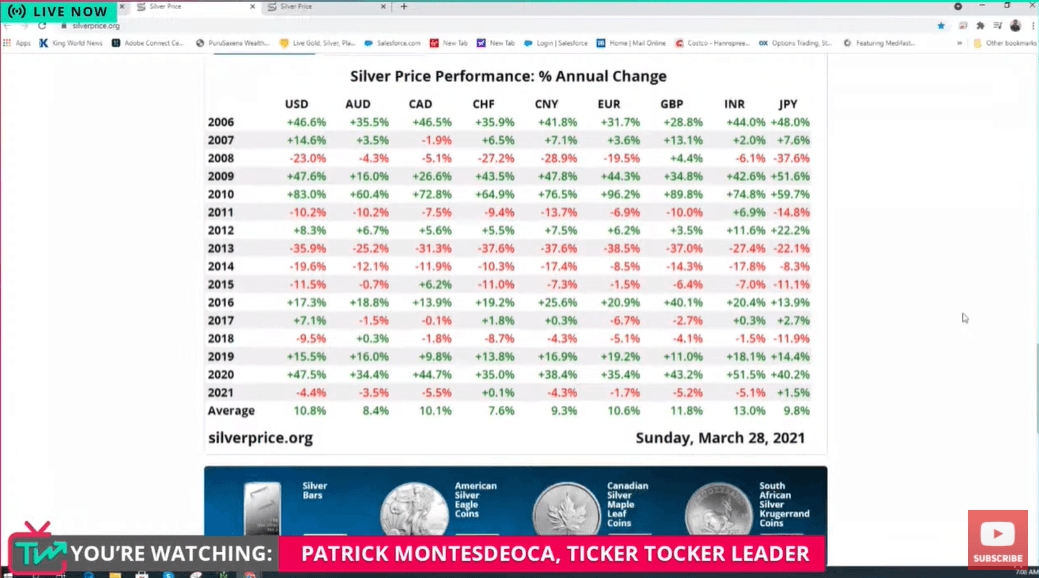 Particularly in silver, we are entering a new paradigm. There is a lot of coverage of the shortage of silver supply, which is an increasing problem. Gold also appears to have shortages and the shortages seem to be increasing. Inflation seems to be kicking in, with prices in grains increasing significantly in the past few months. Those increases will show up in food in the coming months in stores. As inflation increases, the dollar will continue to lose value. Real estate is massively inflated, as is the stock market. Where can people put their money? Gold and silver appear to be a good place for investors. 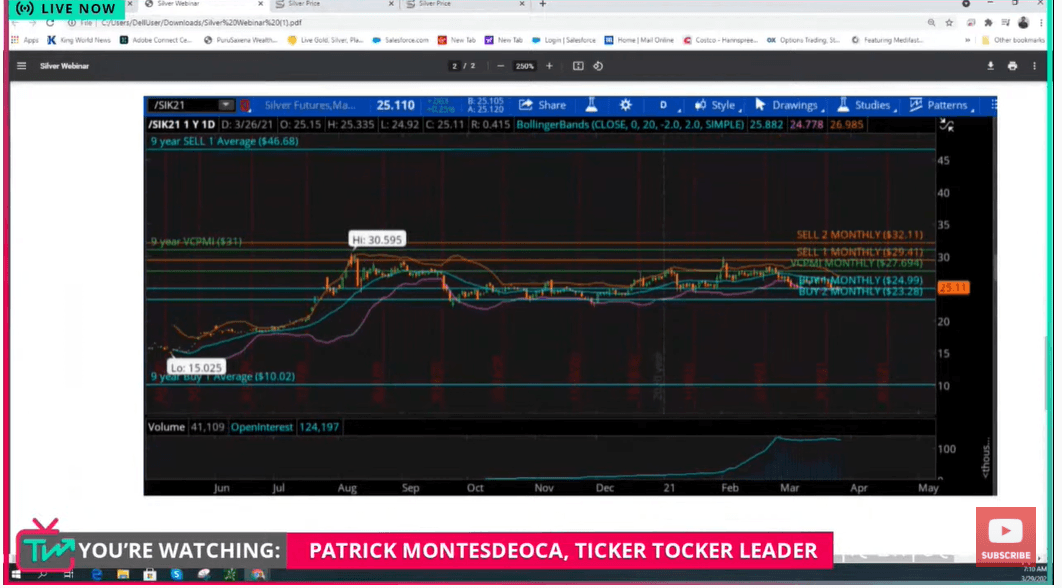 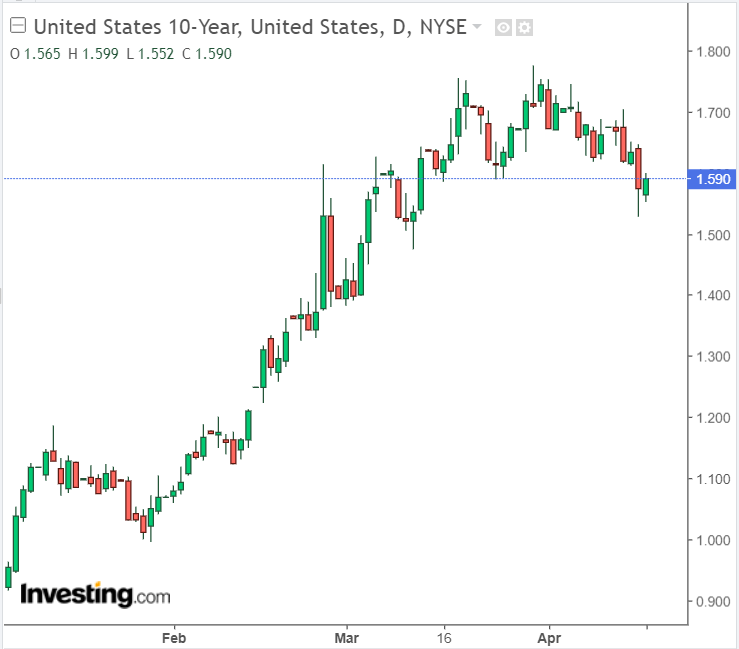 As we return to a more normal economy, we are going to face challenges. No one knows what is ahead. The 10 year note is beginning to indicate that there are some inflationary pressures. Rates have hit 175 as a recent high. The 10 year note is anticipating inflation. But interest rates cannot go up. In the 1970s, even though we had inflation, the debt was not that much of a problem and the US dollar had just come off the gold standard, so we could print a lot of money. Today, we are in a very different situation. We have massive debt of almost $30 trillion and the US dollar has lost most of its value. As the government prints more and more money, the dollar will continue to lose value, and gold and silver are becoming increasingly attractive investments.

Real estate, art and stocks are at record highs, which is asset inflation. What we haven’t seen yet is major price inflation on Main Street. The grains are already beginning to show significant increases, which means food prices will rise over the next few months.

It appears that we are going to see more stimulus packages, which means more money printed and the US dollar worth less and less. All paper currencies are heading toward zero because there is nothing backing them but debt. How much money can you print before the currency is worth nothing?

Price discovery has been skewed across the board. Interest rates have been kept artificially low, so prices have risen exponentially in stocks, real estate, and other markets. We appear to be headed toward yield curve control, which means that the Fed will cap the 30 year bond yield rate from rising. They will allow the short end of the market to inflate as far as it will go. Most debt is in 30 year bonds, so they cannot allow long-term interest rates to rise much, if at all, or there will be widespread defaults. Therefore, the Fed can’t allow the longer term interest rates to rise, but they can let the short term rates rise. In the 1970s, interest rates rose to 15% in 1981 and gold rose to $850. A similar situation could occur in the near future with interest rates and gold rising in price significantly.

If interest rates rise and US bonds lose their ratings, then you are going to start to see a lot of defaults on loans. In the short term, we expect interest rates to go up. We are preparing for the Fed to announce yield curve control. Any such announcement will cause gold and silver to explode like we’ve never seen before. We are seeing what real money is: fiat currencies like the US dollar or is it gold and silver? Investors are looking for real money and gold and silver are real money. We seem to be reaching the limit of how much fiat currency we can print, while remaining the world’s number one economy. Now that status is being seriously questioned. The pandemic has accelerated the process of devaluing the US dollar to the point of it being almost worthless.

The key now is to protect your net worth, especially any assets in US dollars. Silver is an excellent opportunity to hedge against the US dollar and to take advantage of what could be one of the most explosive moves in the silver market in history. Silver is real money. It is also an industrial metal, which will be in greater demand as the economy recovers. But, as real money, silver will greatly benefit from the devaluation of the US dollar. 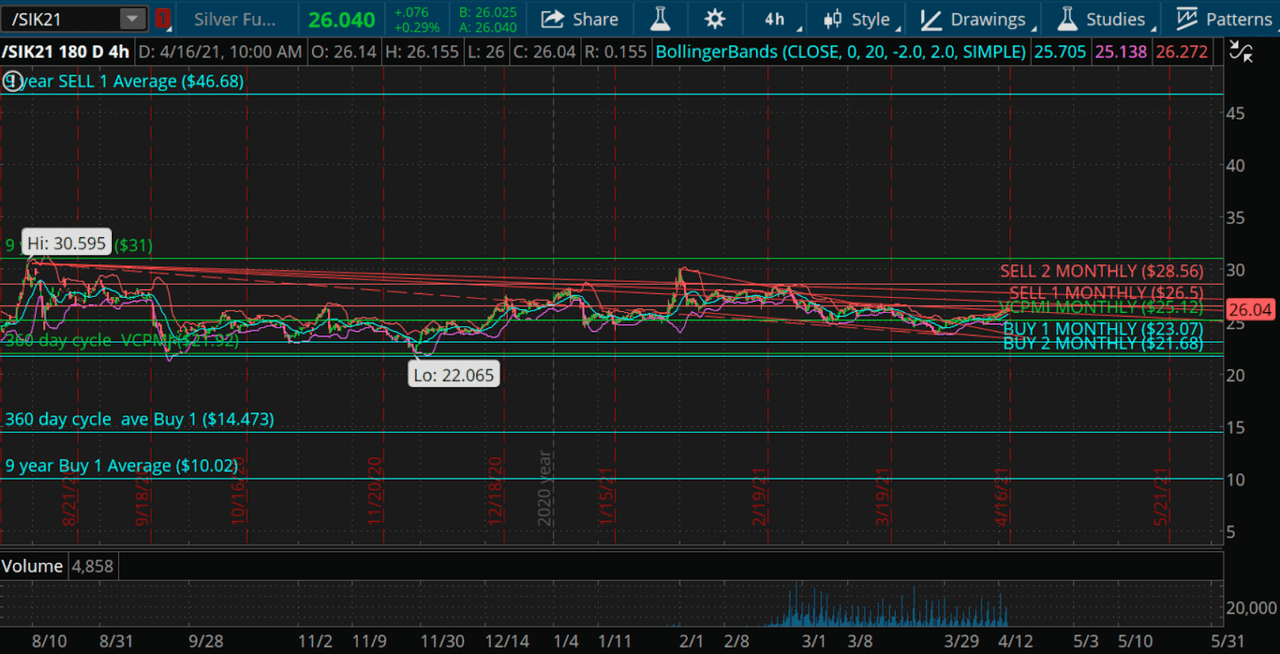 In silver, we recently tested the 360-day Variable Changing Price Momentum Indicator (VC PMI) average at 25.85 and activated the targets of the 9-year cycle at $46.68 and the 360-day cycle below that at around $31.79. Both levels are in play. The daily, weekly and monthly signals have all activated buy signals. Around $25.12 is where the next rally will probably start from, and we expect to see a rally very soon. Worst case, silver may test the December lows, but they are where you should accumulate positions for your long-term core position. One day soon, silver is going to take off and unless you are in it, it will be too late. We recommend trading the short-term gyrations while building a larger and larger long-term position in silver.