Should The Gold Standard Have Been Abolished?

EDITOR'S NOTE: Famed economist Allen Greenspan was prophetic in 1966 when he said, “In the absence of the gold standard, there is no way to protect savings from confiscation through inflation. There is no safe store of value. … Deficit spending is simply a scheme for the confiscation of wealth. Gold stands in the way of this insidious process.” Greenspan had no idea how much worse things would get in the next 50-plus years. In 1966, public debt was $325 billion, or 40% of GDP. Today, that has ballooned to $28.1 trillion, 127% of GDP. Meanwhile, in the last 25 years, the stock market has increased 6.3x while national income has only risen 2.7x. David Stockman on LewROckwell.com concludes, “this cannot lead to anything but a $90 trillion global stock market bubble collapse … [and] to decades of consumer inflation.” And, as Greenspan noted, we don’t have the gold standard to help fight this anymore.

Before Alan Greenspan fell off the wagon in pursuit of government power, position, praise, and riches, in his 1966 speech, “Gold and Economic Freedom,” he said the following:

In the absence of the gold standard, there is no way to protect savings from confiscation through inflation. There is no safe store of value… The financial policy of the welfare state requires that there be no way for the owners of wealth to protect themselves.

This is the shabby secret of the welfare statists’ tirades against gold. Deficit spending is simply a scheme for the confiscation of wealth. Gold stands in the way of this insidious process. It stands as a protector of property rights. If one grasps this, one has no difficulty in understanding the statists’ antagonism toward the gold standard. (Emphasis mine.)

When Greenspan spoke in 1966, the public debt was just $325 billion and amounted to 40% of GDP. And that figure had been steadily falling from the WWII peak of 125%.

No more. The public debt now standards at $28.1 trillion and 127% of GDP and is rising at breakneck speed.

What happened was that once the Fed-fueled tech boom of the 1990s ran out of gas with the dotcom bust in the spring of 2000, industrial production in the US got pinned to the flat-line.

But during the last 21 years since then, the Fed’s balance sheet has soared by $7.6 trillion, or $362 billion per year.

When the central bank injects 20 times more fiat credit into the economy each year, it has to go somewhere.

As dramatically depicted by the chart below, the stock market became the great monetary sump that absorbed the inflationary tide. 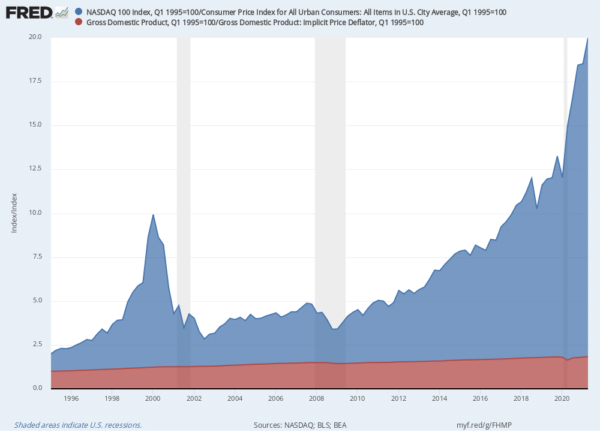 The stock market recorded a staggering $38.3 trillion gain in value during the last 25 years that was well more than double the $14.5 trillion rise of nominal GDP, meaning that the stock market is now capitalized at 200% of national income.

The value of the stock market rose by 6.3X during the last quarter-century of money-printing madness, while national income increased by only 2.7X.

What has driven the market to current nose-bleed heights is a purely central bank-fueled speculative mania and profits-to-earnings ratio (P/E) multiple expansion that is without any plausible foundation.

But this cannot lead to anything but a $90 trillion global stock market bubble collapse when the central banks are finally forced to throw in the towel on their “transitory inflation” baloney.

It also leads to decades of consumer inflation. 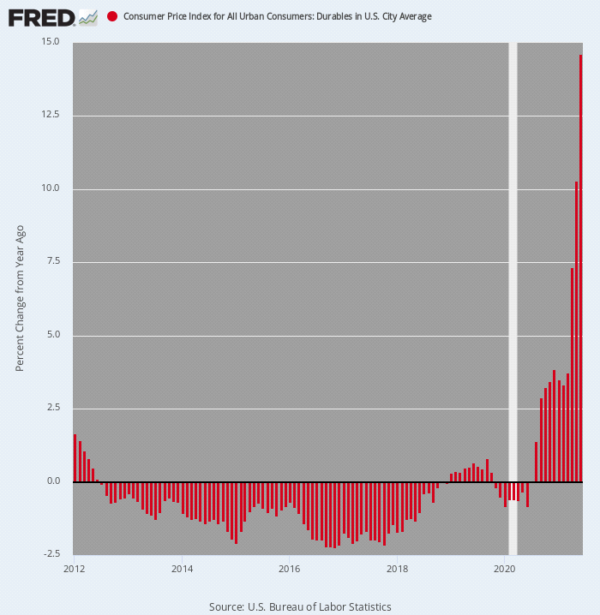 Reprinted with permission from International Man.