Silver and Gold's Seasonality Will Affect Price by Labor Day

EDITOR NOTE: Seasonal trends in metals and mining usually cause a dip in value in June, then again in late July to mid-August. The average investor generally waits until after Labor Day when the market signs start to point to recovery to add more gold and silver to their portfolio. However, smart investors understand the silver and gold’s seasonality and will make moves to save more of your wealth in these precious metals before the general public catches up. In 2021, pre-Labor Day non-CUSIP gold and silver splurges are more important than ever with a major hit to the U.S. dollar possible on the horizon when the IMF does its five-year revaluation of the SDR basket on September 30, 2021.

Metals and miners have a predictable seasonal tendency to decline in mid to late June and make a secondary – often slightly higher low – in the late July to mid-August period.

Though not a pronounced sector-wide decline, it tends to affect most resource sector stocks to a noticeable degree, with "best of breed" companies holding up better than the rest of the cohort.

Usually by mid-August (at the latest), the miners and their associated metals have begun to strengthen, with bid-ask spreads tightening and upside volume building strength as we near Labor Day.

Because this "changing of the guard" takes place in a relatively nuanced manner, many market participants miss what's going on, hold off adding to their stock holdings – and more importantly – physical gold and silver additions until after Labor Day when market movement offers proof of what has just taken place.

In practical matters, this means that those who behave this way end up paying more for their metal, not only in terms of the absolute price, but also get stuck with higher premiums and in many cases, questionable availability.

So, if you are planning to "top off" your stash anyway, why would you wait until the market has already confirmed what you have been suspecting?

Several analysts whom I follow do well at parsing out the summer scenario, with some startling implications about what may lie just ahead this time around.

Seasonality is the tendency for prices to exhibit recurring patterns at certain times during the calendar year. While seasonality doesn’t drive price action, it quantifies annually repeating behavior driven by sentiment, technicals, and fundamentals.

We humans are creatures of habit and herd, which naturally colors our trading decisions. The calendar year’s passage affects the timing and intensity of buying and selling.

Instead, gold’s major seasonality is demand. Today gold stocks are once again back at their most-bullish seasonal juncture, the transition between the typically-drifting summer doldrums and big autumn rallies.

Many fear that this price manipulation scheme, which has been in place since 1975, will continue indefinitely. I can assure you that it WILL NOT. Instead, a moment will come when the overstretched fraud of the derivative markets will snap.

When this happens, it will be recalled in the same manner that Hemingway once described bankruptcy – the current pricing scheme will fail "gradually and then suddenly." Those who continue to plan for this inevitable event will find themselves rewarded, and, most importantly, protected when it finally occurs.

The goal of gold is not to make you rich. It is to protect your savings and purchasing power." Check out the admirable job it's done over the last two decades, handily outpacing the S&P. if you want visually to see this proof in the pudding. 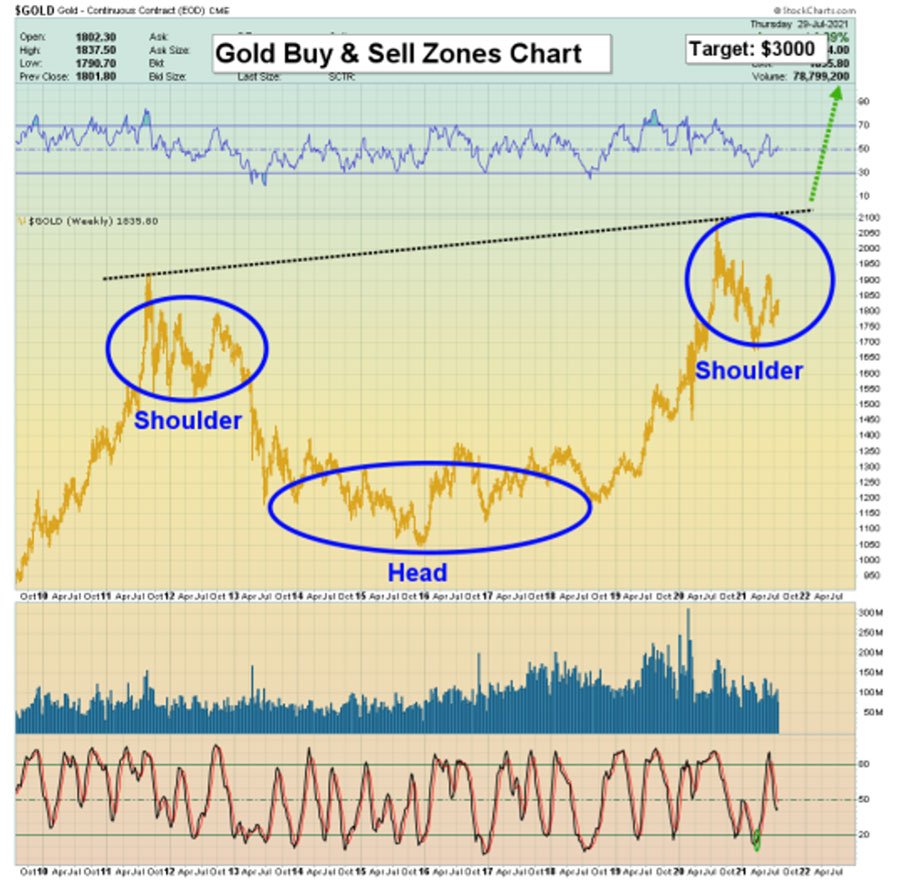 Somewhere in the mid-1800s, we think gold is going to do a tantrum, similar to last summer, with gold leaving behind it's $2,000 to $1,700 zone in a rush. So, everyone who has gotten out, doubted or liquidated their position, is going to be suddenly forced to make a decision. And it won't be a gentleman's entry point where you get time to think about it.

Their projected price for both metals during this timeframe is "off the charts," with most people today probably scoffing at the thought.

Oliver sees these targets as representing "nothing but a routine swing objective based on all the previous gold bull markets (of the last fifty years) of a logarithmic scale." He thinks "this thing could be over and maximally priced at a crisis level by late next year."

I have listened to Oliver’s interviews, granted only occasionally, and have found them to be informative, intriguing, and more often than not, exceedingly accurate.

To be frank, dismissing him out of hand might not be the wisest course. To judge his methodology and conclusions for yourself, consider listening to his July 26 talk titled "Michael Oliver, Fed Reset Coming, Silver to $200" here.

A common reason why many people defer buying gold and silver? They incorrectly see it as a consumption purchase of something like a boat or a lawn mower.

What you're actually accomplishing is exchanging an inferior form of "fiat money" (currency) for a superior form of honest money. Money that has withstood the test of time – in fact, for millennia!

Unlike virtually all paper currencies in history, gold and silver have never gone to zero. Just since the U.S. went off the gold standard in 1971, the dollar has lost almost all of its purchasing power. Stay tuned for the rest...

And unlike the lawnmower, powerboat, or auto – which depreciates as soon as you take it home – the metal held in hand retains its value, and over time tends to increase in value.

If there was ever a time in recent memory when this "double kicker effect" of insurance and profit potential is likely to move into hyperdrive to the upside, the coming months and next few years has got to be it!

Aside from the upcoming Labor Day's normal significance, this one may portend a financial quake that catches everyone by surprise, developing, in the words of Hemingway about how bankruptcy takes place, "Gradually, then Suddenly."